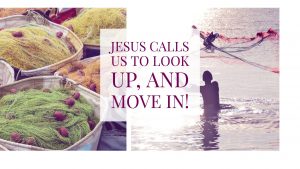 Connection.
Relationship.
Eye to eye.
The sense of being right there “with” you.
Seen. Recognized. Known.

It’s the small things in Scripture that deserve so much of our attention.
Small things like the time when authors record that Jesus lifted up His eyes.
Small things that tell us much about our Lord, His intentions, motivations, and priorities.

Throughout the New Testament, God interjects Himself into the everyday happenings of life as Jesus raises His eyes to see beyond.
He sees much, He is aware, and He moves in.

It’s never once recorded that Jesus looked up only to turn away.
Jesus looks, and then He acts, fueled with a compassionate heart.

But no life, lived for itself, even catches a glimpse of abundance.
No life spent on self-focus will ever find that satisfaction that Christ talks about.
Jesus calls us to quite literally look up and move in as we walk through our everyday lives.

At the grocery store.
At the coffee shop.
At the playground.
In the pickup line at school.
At church.
At the restaurant.
In the neighborhood.
At the gym.

Jesus’s ministry was just beginning and He’d already earned a reputation as healer and preacher. Wherever He went, crowds followed Him. He performed his first miracle in Cana, just about 9 miles from His hometown in Nazareth, where He turned water into wine, but He was much less popular when He claimed to be the Messiah in Nazareth’s synagogue. Wildly unpopular, Jesus was thrown out with the intention of killing Him, but He escaped the angry mob.

Jesus left Nazareth, traveling the 90 some miles to Capernaum where He would spend the majority of His ministry. About 90 minutes in a car for us, but by foot…it was probably a week of solid walking. Scripture doesn’t record His travel, but I wonder what encounters He had along the way. Did Jesus spend time talking with other travelers, carefully turning the conversation to spiritual matters? Did He see sick? Perhaps He healed them. Perhaps He spent evenings teaching the Torah around fire pits, feeding hungry souls.

Whatever happened on that trip, Jesus was read to engage when He arrived in Capernaum.
And I bet you He was excited!
We find such satisfied delight in doing what we were made for, I have no doubt the same was true for Christ.
Jesus was walking the sandy shores of Galilee that day, crowds hungering for truth, and as He spied the fishing boats of Peter, James, and John, His heart probably started beating faster. He was doing the work He had planned from the beginning of time. He was calling people to Himself, to restore the relationship between humanity and God,
and He was going to use ordinary people to do it.

While walking by the Sea of Galilee, he (Jesus) looked up to see two brothers, Simon and Andrew casting a net into the sea, for they were fishermen. (Matthew 4:18)

Just two guys. Doing what they had been doing their entire lives. Fishing was in their blood.
Except that night had been one of “those nights”.
They had pulled an all-nighter with absolutely nothing to show for it. Exhausted and frustrated, they were washing their nets as Jesus and the crowd came along.

Getting into one of the boats, which was Simon’s, he (Jesus) asked him to put out a little bit from the land. And he sat down and taught the people from the boat. (Luke 5:3)

The Lord of Creation, crafter of all the fish in the seas, Ruler of time and space, stepped into Simon’s boat and invited him to partner with Him to teach people.

He finished speaking, the crowd was dissipating, and Jesus turns to Simon, “Put into the deep and let down your nets for a catch.”

So interesting here, are Jesus’s last words…. “for a catch.”
He knew exactly what was waiting for Simon.
But the words were missed on the fisherman, “Master, we toiled all night and took nothing! But at your word I will let down the nets.”
Simon expected nothing; he was just respectfully satisfying the Teacher.
But oh Jesus! He had so much more!

Out they went to the deep with the sun no doubt high in the sky by now, sweat glistening on their brows, perhaps a little weary tension hung in the air as they rowed.
But it vanished instantly as the nets they dropped caught such a large number that their own boat began to sink as well as their partner’s who had come to help.
Fish flapping everywhere, men straining at breaking nets, boats literally sinking, intense shouting to manage the fish, and Simon fell to his knees, “Depart from me for I am a sinful man, O Lord!” he wept.

Jesus had looked up, capturing Simon and his fellow fisherman with His divine lordship, enticing them with the raw beauty of His majesty wrapped in loving-kindness.
And Simon’s response was worship as he recognized who he was in the light of holiness.

“Do not be afraid, from now on you will be catching men”,
Jesus spoke with clarity in the middle of Simon Peter’s chaos.

Christ’s ministry on earth began with His eyes that lifted up so He could see who was in front of Him. Then Jesus went all in, out to the deep, into emptiness, bringing life, bringing abundance, then calling Simon Peter to more.

Where will you go?
What will you do?
With eyes lifted up?

Thanks for joining us today as we journeyed into Borders Week One! Don’t miss out on the discussion below – we’d love to hear your thoughts!