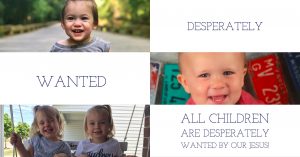 The image of Jesus with children surrounding Him is pictured on the cover of children’s Bibles and displayed in Sunday School rooms all over the country. You’re probably imagining a specific version of this picture as you read. I am, too. Jesus is in His white gown with a red sash, a light brown beard and sandals drawn on His feet. One child sits on His lap while His other arm is spread wide, welcoming the other children around Him.

This image has almost become a cliche.
“Let the little children come to me…”

I can imagine this scene so well, because I’ve been imagining it for over 20 years.
But, listen with me to hear Jesus’ tone.
Don’t read these words in the lofty “Jesus” voice we tend to give Him. Read it as if your kids are about to run on stage during church and when you go to grab them by their squirmy little arm, the pastor says, “No, no, no! Let them come up here. It’s no big deal!”

Then reread it again.
This time, read it like they’re about to run into their daddy’s office where he’s working and after you call out, “Kids, don’t go in there!” you hear, “Babe, it’s fine. They can come in!”

Reread it for a third time, this time remembering how you felt as a child.
Imagine running next door to say hello to your elderly neighbor. Your mama shouts, “Come home and stop bothering Mr. Al!” But Mr. Al responds with a hearty, “Let her come over! I have some lemon cookies to share!”

But friends, not all children know just how wanted they are by the Savior.
Maybe they know their parents want them, but they don’t know Jesus does.
Or maybe they feel unwanted by so many, not realizing that Someone does want them to know Him and love Him and know they are loved by Him.

These children are everywhere.
They sit next to your daughter in class.
They play on your son’s baseball team.
They stand in front of you at the grocery store.
They go to church with you.
They walk miles to and from school every day in the heat of the African sun.
They care for their younger siblings while their parents farm in fields.
They ride on boats across treacherous waters to find safety.
They are used to fight in wars.
They are used for addictions and to cater to disgusting desires.
They are sold and exploited.
They are brought to America with their families.
They are mutilated and married off to men as old as their fathers.
They cover their entire bodies, and they wear nothing at all.
They eat until their bellies can’t fit anymore, and they eat mud cakes to quiet their aching tummies.
They sing songs loudly and learn chants, and they are sworn and scared into silence.
They come from wealthy families, and they come from the poorest of the poor.
These children live in America and they live in New Zealand and every country in between.
These children are everywhere.
And Jesus wants them.

Jesus took the children before Him into His arms, and blessed them. He gave them favor and protection. He took them into His arms, those same arms that would be spread out on a cross with nails driven into them, and He held these precious children. Because He wanted them.

The Bible says over and over again to love and care for the orphan and the widow…
the weak, the poor, the vulnerable, and the lowest in the caste system.

Start praying about what wanting these children means for you.

It can mean deciding to work with children in foster care.
It can mean sponsoring a child overseas.
Maybe it means teaching Sunday School or even volunteering in your kids’ classrooms.
It could mean a mission trip.
It could even mean stepping outside of your political stance or your immediate emotions to give in capacities you never imagined giving.

But I believe, with all of my heart, that Jesus wants us to look at the children in our lives and say, “Hey! It’s ok! Come over and sit with me. I want you.”

And then teach them about the One who wants them more than He wanted His own life.

Thanks for joining us today as we journeyed into Borders Week Two! Don’t miss out on the discussion below – we’d love to hear your thoughts!
Click the above image for today’s Digging Deeper!