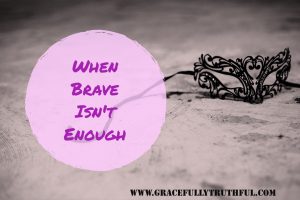 “We all wear masks, and the time comes when we cannot remove them without removing some of our own skin.” – André Berthiaume

“We understand how dangerous a mask can be. We all become what we pretend to be.” – Patrick Rothfuss

Perhaps there’s no greater example of the above quotes fleshed out in the Bible than a couple who intentionally chose their masks and ended in death.

Enter Ananias and Saphira. Their intentions looked good, it was the perfect mask: give money to the church from a piece of property they sold.
Their masquerade: pretending to boldly give themselves away for Christ.
But their deviousness found them out.
Faking “Brave” will never work.
They sold the property and decided to keep back some of the profit, but chose together to tell the Apostle Peter (and God) that they were giving the entire sale amount to the church.

The stage was set and the script was written, the two were all in. The property sold, the money came in, and Ananias came to Peter and told his bold-faced lie…and Peter, with the help of the Holy Spirit, saw his deception as clear as day.
He confronted Ananias and the man fell to the ground dead.
Three hours later, Saphira came looking for her husband and told Peter the same story, only to end up breathing her last just as her husband had.

The thing about this deceiving duo is that they didn’t suddenly decide to boldly lie while pretending to live bravely.
They hadn’t been living authentically all along and then the idea of lying about their property suddenly showed up as an option.
Masquerades had become their life.

Maybe it started innocently enough. A stretching of truth here, a white lie there, or a covering for oneself when they felt cornered until eventually, the lies became easier to tell than the truth.
What once may have felt ill-fitting, was now like second skin, like a mask one had worn for too long. Eventually, they probably even fooled themselves. They looked like they really cared about the church. Probably looked like devoted Christ-followers. They were clearly involved in church life and were on a first name basis with the apostles. But somewhere along the way, they wrapped themselves in lies as they pretended to follow truth.

Starting to squirm?
I am.
I know there are times when lies are easier in my life. When chasing after the truths of Christ are a lot more work than just floating along, fading away into my own perceptions and setting up my own definition of truth, little by lethal little.
Masks are easier to wear than we’d like to think, but are always more deadly than they appear.

Remember another liar? The first one?
Yes, the Enemy Satan. His deception kick-started humanity’s descent into eternal separation from a Holy God.
Death.
Which is why our loving God set in motion His plan to send Jesus as our only possible redeemer because He Is Truth.

Masks aren’t brave.
And the God who died to restore our hearts to His,
longs for us to take them all off
so He can bring genuine, true redemption.

Lies are blossoms rooted in Death.
Truth is solidarity grounded in Life.

Brave appearances will only get us so far in life and will get us nowhere with God.
We can show up to church each week,
serve at the homeless shelter once a month,
give to charity at year’s end,
and it will all look great on paper.
But Jesus teaches that brave living without true love, is meaningless in the end.

No amount of kind deeds, encouraging words, or ornate masks we put on can cover up our fatal flaw….
we are dead because of sin.
Dead without Christ’s life.
Bravery can’t fake life.
Only Jesus’s transformational true love can bring about a bravery that brings abundant life.

I’d like to challenge you to re-read Ananias and Saphira’s story again and as you do, think about the masks you wear, the lies you parade in your heart, and beg God to make you new!
Christ-follower or not,
You can’t fake bravery before the Righteous God.
We all need to be made new!

Thanks for joining us today as we journeyed into Brave Week Three!
Don’t miss out on the discussion below – we’d love to hear your thoughts!
Click the above image for today’s Digging Deeper!

Looking for other journeys from this theme?
Here’s a link to all past studies in Brave!