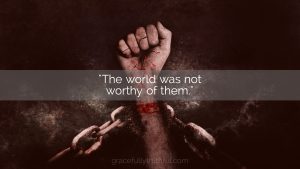 “They went about in skins of sheep and goats, destitute, afflicted, mistreated – of whom the world was not worthy – wandering about in deserts and mountains, and in dens and caves of the earth.” – Hebrews 11:38
As a believer, I love reading about the miraculous ways God used ordinary people to do extraordinary things! How great would it have been to be Enoch, who was taken up to heaven instead of facing death? Or Sarah, who, despite her old age, believed that God had the power to give her the desire of her heart – a child. The author of Hebrews “doesn’t even have time” to tell us about how the prophets conquered kingdoms and stopped the mouths of lions (v. 33). Reading this passage gets me pumped about following Jesus! It shows that if we have faith in a God that is mighty, we can take on the world!

And then there are verses 36-38 in the same chapter, which can be a bit….deflating, to put it mildly.

“Others suffered mocking and flogging, and even chains and imprisonment. They were stoned, they were sawn in two, they were killed with the sword. They went about in skins of sheep and goats, destitute, afflicted, and mistreated – of whom the world was not worthy – wandering about in deserts and mountains, and in dens and caves of the earth.”

Suddenly being a hero of the faith doesn’t sound so glamorous.
What happened to the power we have in a conquering King of Kings?
And how often do we, as Christ-followers, follow a similar “up-down pattern”?

We experience mountain-top-highs full of euphoric close-to-Jesus-moments, but then….the suffering, the mocking, the trials, afflictions, mistreatment, and feeling like a wanderer come closing in. What makes us victorious then? How can it possibly be said of us, “of whom the world was not worthy”?

Hebrews 11:1-35 paints a rosy picture of what it looks like to walk according to God’s will. If taken at face value, we can miss the trials and tribulations that many Biblical heroes faced before their triumphant moments and overlook the fact that Christ Himself tells us that to be His follower guarantees tribulation and persecution.

The morally upright and innocent Abel was despised and killed by his own brother.
Faithful and brave Noah was mocked by the world for building an ark.
Abraham and Sarah left all they knew for a land unknown, trusting God’s leading.
Joseph was tricked and sold into slavery by his brothers long before he became a political leader in Egypt.

What about your story? How have you been scaling mountains only to later be groping in the darkness of trial and persecution for following your Lord? In a world where joy and perfection is expected, it’s easy to lose sight of our solid and sure victory because of Whose We Are.

Instead of looking at Hebrews 11 and becoming discouraged by the trials these heroes faced, we can see the eternal victory behind their temporary un-justice.
“…of whom the world was not worthy…”

The world was not worthy of them because the power of God filled them! The mighty influence of the God of Creation fueled the faith and obedience that set these brave men and women apart from their culture. The same power is available to us as well! When we are brave enough to say no to the treasures of the world and yes to God’s plan for us, the world becomes unworthy of us.

In Philippians 1:27, Paul encourages believers to let their manner of life be worthy of the gospel of Christ because our victory lies in the permanency of the eternal instead of the fleeting vapor of the temporary. Feeling destitute, afflicted, mistreated, and like you’re wandering in a desert, doesn’t have to render us defeated. Instead we can use these times as a reminder of the words of Jesus: “If you were of the world, the world would love you as its own; but because you are not of the world, but I chose you out of the world, therefore the world hates you.” (John 15:19)

Christ has promised that He has already overcome the world. The afflictions of this world are only shadows compared to the holiness of God and the riches of heaven that await those in Christ. In fact God, in His beautiful irony, flips the table on the world’s idea of success – it is those who suffer for Him that will inherit the world.
Take heart, walk in bravery, Christian, and rejoice in suffering because you have been counted worthy of Christ!

Thanks for joining us today as we journeyed into Brave Week One! Don’t miss out on the discussion below – we’d love to hear your thoughts!