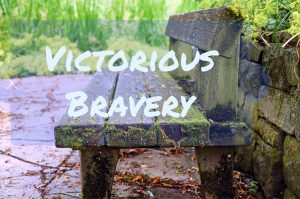 I was coming off of a very long weekend of intense marriage strengthening exercises (AKA: hours of conflict). It was Monday and we had worked through our issues and were holding hands again with fingers interlocked, but our hearts were still shaking. I sat watching my son working in physical therapy when Brave walked in the door.

She was white haired with shuffling steps and thin, wrinkled skin wrapped around bones that were at least 9 decades old. Her smile was wide, despite her timid steps…because she grasped the hand intertwined with hers. I nearly dissolved in tears at the duo. They may as well have been waltzing on a ballroom floor, their intimacy was so obvious, their connection so deep.
She was his princess and He was her Charming.
They laughed together and made little jokes. He helped her to a seat and she straightened his shirt. I couldn’t help but wonder how many long weekends of “intense marriage strengthening exercises” they had walked through on their journey to “here”.
How many times had their eyes shone with anger instead of satisfied love?
What had their first decade together been marked by when He was handsome and Her skin was pristine? And, did it really matter now?
All those struggles,
all those hurt feelings,
all those times they surely had felt it wasn’t worth it…
and here they stood, hearts knit together and conflict overcome. Victory.

As I watched the pair and thought about my own marriage, it occurred to me that it wasn’t about the current conflict, but rather the end result and finishing well. When this sweet couple were in their 30’s or 40’s or 50’s, they had no way to see where they would be or how rich their relationship would grow.
They simply believed it would be worth it and so they pressed on.
That is the essence of brave.
They saw an end by faith.
They chose being brave over walking out.

As Christ-followers our bravery is rooted even deeper.
Our hope is sure.
We pursue Christ in every area, not because we are so steadfast or honorable or worthy, but because the hope of Jesus is enough.

This abiding hope isn’t some pie-in-the-sky wishful thinking,
bravery is ours because it has already been won.
Paul passionately portrays Christ’s unfathomable love in Ephesians 2 by describing the sacrifice He chose for us so that we may be
saved by grace,
raised with Christ, and
seated with Him in the heavenly realms.
This is a little technical, but bear with me 🙂 All of those verbs are past tense: saved, raised, seated – no question.

In God’s timeline of salvation (surrendering control to Him),
sanctification (God working in you), and
glorification (when we will be redeemed fully in Heaven), the assurance of these events for genuine Christ-followers is
so certain that it’s already been done.

Once you cross the line of faith, victory is solidly yours to own and wrap up in and bank on.
In life,
in conflict,
in loss,
in illness,
in tragedy,
in death,
victory is ours and by it,
bravery is available in quantities we can’t even begin to imagine.

That kind of bravery is the fuel
for lasting marriages,
for overcoming abuse,
for freedom from addiction,
for life where death has reigned,
for healing in relationships,
for integrity in place of fear.

It’s the same bravery that was stamped across the life of Joshua as he assumed leadership from the legendary Moses, for Solomon as he undertook building the temple, and for God’s people as they crossed into the Promised Land.
“Be strong and courageous, do not tremble or be afraid, for the Lord your God is with you.” (Josh 1:9)
God spoke it over His people and His chosen leaders countless times.
And He still speaks it over us.

Thanks for joining us today as we journeyed into Brave Week Two! Don’t miss out on the discussion below – we’d love to hear your thoughts!

Love it “hope in Jesus is enough” . So true his promise is sure, because he is faithful. Hebrews 10:23 is simple but solid hope. I appreciate your transparent story in today’s lesson. If the absence of conflict is what secured our marriages….no one would remain married to see the white haired days together. I’ve come to see conflict as seeds planted meant to mature and strengthen our resolve to keep our wedding vows. Even so….Bravery is needed to keep the hope “Jesus is enough” in the heat of conflict. We sometimes want “hope in our spouse to be enough”.

I love what you said, “we sometimes want hope in our spouse to be enough”because this is what seems to come so naturally. Hope in spouse, hope in finances, hope in health, hope in success….but none of these are trustworthy enough. Real Bravery is putting our hope in a security that can not be destroyed!
Love you, Lady!