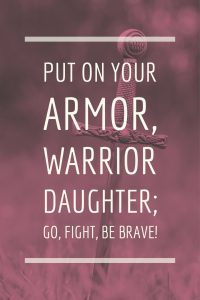 I was ten years old when I became Lucy, also known as Queen Lucy of Narnia. I say became because in my world, there was no pretend.
There was real and there was really real.
The real world was the world where I was Kendra, a blonde hair, blue eyed, American little girl. The really real world was the world where I was Lucy, or a mommy to seven children, or a homeless girl trying to care for her siblings. But when I was ten, I became Lucy. It helped that I was actually on a stage with people dressed in costume to go along with my world. It helped that “snow” fell from the catwalk and Mr. Tumnus wore real horns on his head. Everything about this world was really real. And so, when Father Christmas handed me my own little dagger, telling me it was to defend myself if the need arose, I looked deeply into his eyes and said, “I think I could be brave enough.” And I meant those words with every fiber of my little being. “I think I could be brave enough.”

The definition of “brave”, is: ready to face and endure danger or pain; showing courage.
And “courage” is defined as: the ability to do something that frightens someone.

As Lucy, I wasn’t sure I was brave enough, I didn’t even really feel brave. There are many times in life where I don’t feel brave. Getting ready to deliver my twin daughters six weeks before their due date, sleeping outside in the middle of Africa among a tribe I didn’t know and with a team I had known for just a few days, admitting to my parents that I had made some really big mistakes and needed some help from them, and many times before those, I didn’t feel brave.

But that isn’t a bad thing. Because, you see, even Jesus didn’t always feel brave. Jesus knew exactly the path that was laid out before Him.
He knew that the only way the people He loved so deeply would ever have a chance to live, was if He didn’t.

Just hours before soldiers would come to arrest Jesus, He took his disciples up to the Mount of Olives to pray. We aren’t told much detail of His prayer, or maybe we are. Maybe in this agonizing moment, the only words Jesus could muster were these,
“My Father, if it is possible, let this cup pass from me; nevertheless, not as I will, but as you will.”

Close your eyes and imagine the weight of Jesus’ very real, very human feelings. Imagine the guilt you would carry as a person who murders their own child, the weight you would feel as a Nazi soldier over a concentration camp, and the depth of the pain you would endure as an ISIS terrorist. Sin on top of sin on top of sin was about to be placed on the shoulders of a man who had never sinned.
Such weight, such heaviness. Jesus knew that not only was he about to suffer the most painful form of death ever performed on an individual, but that it was also going to be coupled with the weight of the sins of the entire world on his shoulders. And then, there was the incomprehensible agony of complete and total separation from God the Father. A breaking of unity. The consequence of sin. Torturous hell.

And in that moment, Jesus didn’t feel brave.
He asked the Father if that cup of agony could pass from Him.
With a passion so fiery, and an emotion so raw that he wept salty tears and sweat drops of blood, Jesus asked His Father if there was any other way to provide The Way for us to receive everlasting life. In the same moment he uttered the words “…if it is possible…”, He knew that it wasn’t. But He still didn’t feel brave.

Lack of brave feelings doesn’t mean we don’t follow through.
It doesn’t mean we are not courageous.
It just means that in that moment we aren’t humanly ready to face or endure pain.
Father God knew what Jesus needed, so He sent an angel to strengthen Him.
I imagine that angel embracing our precious Jesus and weeping with Him, then helping him rise from the ground. As Jesus walked to his disciples he told them that the hour had come.
Jesus was ready. Jesus was brave.

We might not always feel brave.
In life, in love, in following Jesus, in making tough choices, in honoring others….
but it doesn’t mean we aren’t courageous.
Not feeling brave is okay!
But becoming crippled by our lack of bravery is wrong.
Jesus didn’t feel brave, but he didn’t let that debilitate Him from following through on His divine calling!

As Lucy, I didn’t feel very brave. I wasn’t even sure I could be brave enough.
Maybe that is you today.
Maybe you don’t feel like you have the courage to face the trials that lie in your path.
Don’t give in to fear!
Be reminded that the Lord is with you wherever you go and that the battle is won because of Jesus!
Put on your armor, Warrior Daughter; grab your little dagger, and go, fight, and be brave!

Thanks for joining us today as we journeyed into Brave Week Two! Don’t miss out on the discussion below – we’d love to hear your thoughts!