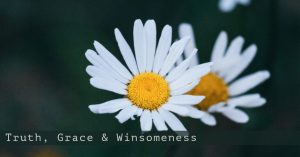 My word of the year is winsome.
I know, maybe a little odd.

Each year in December, I begin intentionally speaking with the Lord about the coming year. How would He have me grow specifically?
In which areas do I need to take new ground for the kingdom?
Where am I feeling convicted?

I’m a “truth-girl” by nature.
I love truth, hold it tightly, seek it out, and test it to make sure no deceit is there.
I spent far too many years holding onto lies and building my life upon them.
Then my life broke, shattering into a million pieces.

My foundation necessitated solidity.
Hurt, angry, and fearful, I threw away everything about my previous foundation, tearing out deep-seated lies and seeking only unshakeable, incorruptible truth.

Battling to find truth became my lifeline.
Because truth always wins over deception.

I’m still “in the fight” against lies I innocuously believe about myself, others, and even God, but the more I dwell with the Lord through His Word, the steadier my life becomes.
The author of Truth has captivated my heart
with His steadfast and unchanging beauty!

I had discovered the priceless treasure of Jesus, His Word, and His boundless grace.
I tore down all I had, giving everything over to Him, and finding the deepest delight in simply being His as He became Mine.

The trouble with us “truth-girls” is we like to dole it out in heavy helpings. Quickly pointing out lies and applying the antidotal truth in its place.
Helpful, right?!

Well, yes, unless we do it sans grace.
Jesus, the fullness of truth, never gave truth without grace.

And the Word (Jesus!) became flesh and dwelt among us,
and we have seen his glory,
glory as of the only Son from the Father,
full of grace and truth. (John 1:14)

I, on the other hand, often give truth without grace.
Hence, winsome.

Jesus was the epitome of winsome.
He engaged in the ordinary conversations, the mundane of everyday life, and He did it with beautiful, attractive winsomeness while extending truth.

He could have kept preaching, instead He cared about hungry bellies and starved hearts.
He chose preparing a meal and served the people.

He could have kept walking, instead, he engaged with a young man who felt he had it all figured out.
He spoke with grace, extending Him the way of Life without budging on truth.

His close friend had denied Him 3 times right before His death. Jesus could have lectured him, pointing out where to do better or how wrong he was.
Rather, He cooked breakfast, reinstated his friend, and gave Him purpose.

I’m a few months into my year of “winsome”.
This morning, I journaled again, “Keep making me winsome, Lord. May your grace be evident to all I encounter today.”

Sisters, it’s one thing to ask for training in righteousness.
It’s quite another to be obedient in it.

It was a mere 35 minutes after my time with the Lord.
I was seated in a coffee shop, hot drink and breakfast before me, ready to tackle my mountain of “must-finish”, when the Lord’s whisper interrupted me, “Look up, Daughter.”

I glanced up and saw a middle-aged man taking up an entire table for himself.
Coat tossed haphazardly.
2 bags and a backpack taking up the remaining table space.
His head bent so low to his phone, I couldn’t even see his face.
Glasses flung carelessly in front of him.
Stocking cap firmly attached to the top of his skull.

“Offer him breakfast.”
The Spirit spoke to my heart again, insistently.

“No”, was my quick reply.
“Do you see how old he is?! He might be a sex-trafficker!
He’s so disheveled, Lord. If he wanted something, he would get it. He clearly only cares about his phone. No.”

“No! Lord, not winsome. Not now. I’m not being “un-winsome”. His breakfast is not my concern. That’s weird, Lord. What would he say?!”

Ashamedly, I admit, I rolled my eyes, plucked out my headphones, slowly pushing away from the table. “Okay, Lord. Okay. But if this doesn’t end well….” As if I could threaten the Lord God.

“Excuse me, Sir? Sir?”, graciously the Lord sweetened my tone as I bent to look in his eyes.
His eyes moved erratically, furtively glancing everywhere but into mine.
He mumbled a non-response, and my heart broke instantly.
This man was autistic.

How many had looked at him, but never seen him?
Just as I had.

How many eye rolls had he been the recipient of?
Like mine.

How many times had he been ignored because he was too scattered and disorganized?
As I had wanted to.

Sisters, Daniel is made in the image of the very same God who crafted you and me,
yet I was far more willing to be comfortable than to live winsomely for another.

I could journal and pray and have a “word of the year”, but none of it matters unless I’m also willing to listen and obey. As brother James puts it, “faith without works is dead.”

Here’s the truth: as much as I pushed against the voice of my Father that day, I still heard it.
I guarantee you if I hadn’t been practicing intentional time with the Lord, I wouldn’t have even been listening for His whisper.

The more I talk with Him, the more familiar His voice becomes.
The more captivated I am with His truth and His grace,
the more willing I am to extend it to others.
Even if my arrogant heart resists sometimes.

Thanks for joining us today as we journeyed into Captivating Week Two! Don’t miss out on the discussion below – we’d love to hear your thoughts!

Looking for other journeys from this theme?
Here’s a link to all past studies in Captivating!

Thankful for you listening and being obedient, for being winsome! We all need a little winsome attention from time to time.