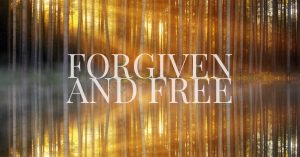 Come alongside me for a moment and picture Peter as he approached Jesus with his serious questions about forgiveness. I imagine the conversation could have gone something like…

Peter, his brow furrowed: Yeshua, can we talk about forgiveness? I know you are too generous to forgive just once or twice, but how many times must we forgive? I’m thinking seven – it’s the perfect number in Jewish tradition. What do you think, Teacher? Is seven the perfect number for forgiving?

Jesus, smiling, slings an arm around Peter and pulls him to His side as they walk: My dear Peter. I love your heart to know My heart. And as generous as that sounds, know that it will never be enough. You must forgive exponentially more. Seventy times seven, if that is how many offenses you choose to pick up. And truthfully? A whole lot more. Let me tell you a story…

The response Jesus gave to Peter gives us a clear picture of Father God’s forgiveness portrayed over and over throughout Scripture.

Time and again, He called for their repentance in love and offered His perfect forgiveness to every repentant heart.

when His people worshipped idols and false gods
when His people turned from Him
when the Ninevites heeded his prophet, Jonah, and turned from their sin
when David repented of murdering Uriah, the husband of Bathsheba.
The Almighty God….forgave.

In the New Testament, we see God’s forgiveness lived out through the life, death and resurrection of Jesus Christ. Jesus reiterated God’s father-heart by forgiving those who came to Him. And not just forgiving their sin, but awakening them to new life.

Time and again, He received their repentance in love and offered His perfect forgiveness to every repentant heart…
and asked boldly that God would forgive those who hadn’t yet repented.

when Zacchaeus repented of his sin
when the woman with the alabaster jar anointed His feet with oil
when He healed the paralyzed man
when He forgave, and asked God to forgive, those who crucified Him.
The Almighty God….forgave.

God’s definition of forgiveness is so much more.
His forgiveness reaches past our human description
as He pursues each of us individually, passionately.

No matter our offense, no matter our dirt.
His love pushes the boundaries of our human forgiveness as He laid down His life,
His ultimate sacrifice.

There’s a worship song by Cory Asbury that has been on repeat in my home and heart lately. His words speak truth about God’s father-heart, His relentless pursuit of us and His forgiveness in a way that makes my throat throb and tears spring to my eyes every time I hear or sing it.

I can vividly remember being a young teenager and huddling on the couch with friends as we watched romantic comedies like While You Were Sleeping or Sabrina or Anne of Avonlea. Every time the music would swell and the heroine would stop running away from “the one” who loved her and finally reward his long-suffering pursuit, such a sense of longing would fill me and my teenage counterparts. Oh, to be so loved! To be so pursued! To be so wanted!

If we are being transparent with one another, each of us must confess that we are all too familiar with that desire.
We all long to be pursued.
Perhaps you long for that pursuit from…
a suitor,
your spouse,
your friend,
your father,
fill-in-your-blank.

And Sisters? That is totally natural!
We were designed to walk with Him together in His perfect creation,
but when sin entered the picture, everything shifted.
We could no longer walk together with Him, instead we ran from Him.

And there it is.
The line in the sand between how we forgive and how He forgives.

When we forgive others, we
stop being angry,
stop blaming the other person,
stop requiring payment for their wrongs
so we can each move forward.

When He forgives us, He:
is not angry
does not condemn us
does not require payment for our sin,
because He Himself has already paid for us
so He can move toward us.

God’s forgiveness, so unlike ours, removes the barriers we throw up,
allowing His pursuit to overtake us!
His forgiveness is all about restoring us to Himself,
so He can draw ever nearer to us.

Oh, my heart. Does that stir you the way it does me, Loves?
Our sin stands between us, an impassable gap,
But the Almighty God…..forgives.

His pursuit.
His forgiveness.
Results in freedom to delight in Him and He in us!

Father, You are majestic and holy. Your beauty is more than words can say. Your forgiveness is beyond our ability to fully understand, but we thank You for it and for Your endless pursuit of us. Teach us to pursue the hearts of others the way You pursue us.
Patiently. Relentlessly, and with much forgiveness and grace.
We love you.

Thanks for joining us today as we journeyed into Character Week Three! Don’t miss out on the discussion below – we’d love to hear your thoughts!

Looking for other journeys from this theme?
Here’s a link to all past studies in Character!