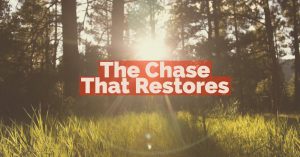 res·to·ra·tion- the action of returning something to a former condition.

Around seven years ago after returning from my first trip to Kenya, I felt the Lord tell me that my time on the mission field wasn’t finished yet. I had just gotten used to the feeling of warm water, flushing toilets, sleeping on a mattress, and air conditioning again when I heard from Him, and to be honest, I wasn’t surprised.

I was called into missions at thirteen years old and now that I was old enough to pursue this calling, I felt as if I was ready to go wherever the Lord was going to lead.

About two months later, I was approached with the opportunity to be a junior leader that summer on another overseas trip with the same organization and I said yes instantly.
But then something unexpected happened.
I started to run away from God’s calling.

Just as Jonah was anxious to flee to Tarshish after hearing what God had asked him to do, I decided that financial stability, leaving my job, and saying goodbye to my family and friends was going to be too hard to give up again. Ultimately, these were more important than what God had called me to do. I made up excuse after excuse and ran in the opposite direction.

While I’m happy to report that I never physically ended up in the belly of a whale,
I did feel as if I had spent some time feeling similarly to Jonah during that season.

I was distressed in a dark place, with no one to turn to except for the Lord,
and even that felt unfamiliar and awkward.

My life was not over because I did not lead that summer,
but being outside of the will of God is not a place we should strive to be or choose to linger.
The months following my decision to not go,
God continuously pursued me.
Because His reach of grace doesn’t fall back when we choose another Love.
His chase on my heart and life showed me that He cared for me, and that He wasn’t going to give up on me. He knew that following His heart, was the most abundant life for me, and He refused to just “let me go my way”. One of the ways He chased me was by the people He was placing in my path.

A few of the teammates I had gone to Kenya with surprised me that summer and all flew to Atlanta for a mini reunion as well as to celebrate my 19th birthday. Towards the end of their stay, we turned on worship music and had a night of prayer and singing praise to Jesus together in my basement.
It was a holy and beautiful moment I’ll remember forever.
It was during this time, one of my former teammates bravely asked me why I was resisting God’s calling over my life so much.

He told me that he felt the Holy Spirit’s prompt to ask the question
and when the crocodile tears began to fall,
I couldn’t hold it in any longer.
I explained the entire situation, start to finish, and the very next morning I woke up and applied to lead another trip.
Through this night of praise and worship,
a night I wasn’t expecting,
God began to restore me from the inside out
as His chasing heart caught up to me.

Looking back on that moment from seven years ago,
I’m reminded of how beautiful it is to be pursued by a loving Heavenly Father,
especially when we don’t deserve it.

Worship is the key to restoration. Through those desperate moments of weariness,
God invited me into restoration as I chose worship to be my sacrifice of love.

While writing this, I’ve been listening to Reckless Love by Cory Asbury on repeat. The chorus and bridge go like this:

After Jonah had been inside of the whale for three days and three nights, he was vomited onto dry land. Upon this, Jonah heard from the Lord for the second time and ran straight towards Nineveh, never looking back.

Through worship and restoration, there is redemption in the Father’s embrace!
He’s chasing after you, Beloved.
And It’s okay to be caught.

Thanks for joining us today as we journeyed into Worship Week Two! Don’t miss out on the discussion below – we’d love to hear your thoughts!
Click the above image for today’s Digging Deeper!