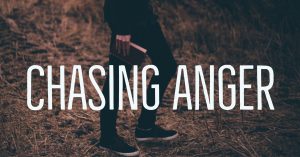 The word alone carries all kinds of negative connotations.
None of us want to admit that we struggle with the feeling, but I’m willing to bet most of us wrestle with it far more than we’d like to admit.
I know I do.
It’s funny, because until tasked with writing this piece, I didn’t fully realize that I was even dealing with anger. When asked to take on the topic of Jonah’s anger, I quickly agreed.
“Sure, I can write about anger,” I thought to myself.
“I don’t really relate to it, but I can write about it.”
I can almost hear God chuckling to Himself as I recount my thoughts to you now. Not in a spiteful way, but more of an “Oh, Child. You have so much growth ahead of you. Take My hand, I’ll walk you through it,” kind of way.

Allow me to set the stage for you. Jonah had run from God in an attempt to escape obedience. After a tumultuous boat ride, a swift kick overboard, and three days and nights in the belly of the giant fish, he was puked out onto dry land and finally chose to obey God. He traveled a great distance (by foot) to Nineveh, where he warned the people that their sin had angered God and destruction was nigh.

I wonder what our old pal Jonah expected at that point. I wonder if he mostly expected them to jeer and ridicule him for his message. Was he expecting tomatoes and stones to be thrown in his direction? I wonder if that’s why he ran – because he didn’t want to deal with their rejection in the face of his message. Was he afraid? (I mean, none of us have ever felt that way…Right?)

I wonder if he thought they’d keep on partying and sinning away until God flattened their town. But the people of Nineveh were distraught at the delivery of his message.
They were convicted and turned from their sin. Instead of hurling shouts and insults at Jonah, they began to fast and pray. Then, their king found out…and joined them.

The New Living Translation puts it like this (Jonah 3:10 and 4:1):
When God saw what they had done and how they had put a stop to their evil ways, He changed his mind and did not carry out the destruction He had threatened. This change of plans greatly upset Jonah, and he became very angry.

The Word tells us that “This change of plans greatly upset Jonah, and he became very angry.

Truth?
This may as well have been written about me. And maybe you, too?
Think about the last time plans were changed on you. Were you graceful and did you roll with it? I wasn’t, and I didn’t.
The change of plans greatly upset me, and I became very angry.

Jonah was downright frustrated. I get it.
The dude didn’t want to go to Nineveh to begin with.
He tried to run, but God chased him.
He spent three days and nights in the belly of a disgusting fish.
Then, he was vomited out…Ick.

Jonah finally obeyed, only to find himself hoofing it the long distance to Nineveh…where he finally delivered the message of impending destruction…only to find that God had decided to show mercy instead! After all of that!

Can you claim you wouldn’t have wrestled anger, or at the very least, frustration in that instance? I’m not sure I can.

What I love about this so much is that in the face of Jonah’s unrighteous anger, God doesn’t smite him down or “put him in his place.” Instead, He responds with a quiet question:
Is it right for you to be angry about this?

Isn’t that just His gentle way?
Of course, it was wrong of Jonah to be angry.
But rather than ridicule him or call him out for being petty, our loving Father encourages introspection. He leads Jonah to Truth, but doesn’t force it on him.
And He does the same for us.

We have a choice to make when our day doesn’t go our way,
when our health isn’t what we envisioned,
when our spouse doesn’t respond the way we wanted,
when our children make choices we hoped they wouldn’t,
when our life doesn’t look as we imagined.
We can choose to respond in anger,
or we can pause and give thanks for God’s sovereignty in our life.

We all feel anger sometimes.
God created the capacity for anger within us, and it would be foolish to pretend like we don’t experience that feeling. But He also placed His Spirit within us when we accepted Christ, and as a new creation in Him, we are held to a higher standard.

As we move forward, let’s recognize the moments when our anger begins to flare and imagine that God were asking us the same question He asked Jonah:
Is it right for you to be angry about this?

Let’s choose to chase Him rather than anger!

Thanks for joining us today as we journeyed into Chase Week Two! Don’t miss out on the discussion below – we’d love to hear your thoughts!