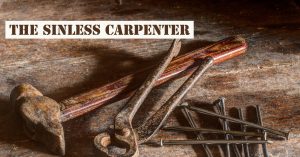 Who Is Jesus?
Growing up around the church I was very familiar with God, Jesus, and the Holy Spirit, but the way the three related and worked together brought forth a sense of confusion to me. I knew the basic facts:

I like to refer to that as the ‘flannel board’ Sunday school version that many of us were taught as children. But that only begins to scratch the surface of who Jesus really is and why God sent Him to Earth.

Jesus was 100% God, and no one who knew Him on earth would say He ever thought of Himself as just a “good man”. Jesus’s own claim to be God is what landed Him before Pilot with the sentence of crucifixion.

While Jesus had all rights and authorities of being God, having existed before time began as He in fact “was before all things, and by Him all things were made. Without Him nothing was made that has been made”, Jesus was also 100% human. I asked my mom a few months ago about how Jesus grew up. Do you think that He had to do chores? Did he have a bedtime? What about when he was a baby? Did he cry a lot?

My mom responded with a light-hearted laugh.

“Of course He did chores, had a bedtime, and cried. He was human after all.”

I tend to forget that Jesus grew up just like you and I did. He had parents, and siblings, and one day a job as a carpenter. Can you only imagine how beautifully perfect His farmhouse tables would’ve been?

You see, Jesus only had 3 ½ years of actual ministry recorded in Scripture. We jump quickly from birth to ministry, with roughly 30 years in between, catching just tiny glimpses of who Jesus was as a child. We do know that as he got older, around the age of 12, he stayed behind in Jerusalem one year after the Passover, and when his parents returned they found him in the Temple, asking questions and giving His own answers, while those around Him stood amazed at His knowledge, understanding, and authority.

This was no ordinary man, this was God Almighty with skin on.

Jesus is the relatable God, the God who feels our feelings, weeps our tears, smells of our sweat, and aches with our physical weariness. He likely had a sunburn, got sick, lost His voice while teaching, and was exhausted from a long day. Jesus is the close-up, hold your hand, hug your shoulders, flesh, blood, teeth, freckles, and hair image of the invisible God.

Jesus is the picture of the God we cannot see.

How is He able to offer eternal life for every human being across all time?
Adam gave birth to death for all humanity. His seed was corrupt and he could only have children that belonged to and inherited death. Death had corrupted his soul just as if it were his DNA, and now all humanity would suffer the effects of sin, which is death and separation from God. As Paul says, “In Adam we all die…”

But Jesus Christ has the seed of eternal life, won through his resurrection from the dead, whereby defeating Death itself. Add in the fact that Christ’s seed is flawless because of His perfectly righteous life in the flesh. Jesus lived perfectly where Adam (and each of us) could only possibly sin. Christ can only give birth to life as no death is in Him.

Sin, which ruined all humanity across all time, came through one man, one act of disobedience. That’s pretty powerful!

If sin from Adam destroyed humanity so thoroughly, Paul asks the rhetorical question “how much more will those who are of Christ….reign in life?!”

Adam was human, but wrecked us.

Jesus is God of all, and by offering His righteousness, saves all who ask Him to be their Savior. His selflessness, in being without one ounce of sin, to die for each and every single one of us, sinners, has allowed those who choose to follow Him to not experience death, but only life.

Can we just stop there for a second?

There is no death as a follower of Jesus!

What is Jesus doing right now?
Seeing as though there is no death as a follower of Jesus, there is only life, when Jesus was raised to life and went back to Heaven His work didn’t stop there. He is actively fighting for us, while sitting, and sometimes standing, at the right hand of The Father.

Look at how Paul describes Stephen’s stoning in Acts 7:54-57 . Paul invites us into the moment where the Heavens are open and Jesus is standing there, advocating on our behalf. It wasn’t but moments later that Stephen closed his eyes on this Earth, and was welcomed into Heaven the next.

Jesus is actively waiting to return to bring the rest of His bride home; it’s our mission here on Earth to be ready for that moment. To be actively spending time with Him, getting to know Him, and being watchful to the things He shows us.

It excites me to know that though Jesus doesn’t know when His return will be (only God the Father knows), He is using us to draw broken hearts back to Himself. He will continue pursuing us until we meet face-to-face one day and He comes to take His people home!

Thanks for joining us today as we journeyed into Creed Week Two! Don’t miss out on the discussion below – we’d love to hear your thoughts!

Looking for other journeys from this theme?
Here’s a link to all past studies in Creed!