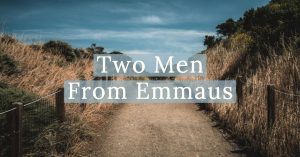 Our feet kicked up dust as we walked along the road from Jerusalem to Emmaus. It had been a long, strange, eventful week neither of us would forget and now we were grappling over recent rumors. Cleopas was sure it was possible, but I, on the other hand, was adamant it simply could not be. Both our hearts hung low in heated confusion, high emotion, and debate. We talked and argued for several miles, until we were joined by a strange fellow traveler. The heat of our discussion dawned on us when the traveler intrusively asked, “What is this dispute that you’re having with each other as you are walking?”. (Luke 24:17)

Cleopas and I stopped in our tracks.  My thoughts went racing. Is this a foreigner? How can he not know what’s taken place? Everyone in Jerusalem, if not the entire nation, knows what has happened! Cleopas asked him, “Are you the only visitor in Jerusalem who doesn’t know the things that happened there in these days?”. He replied, “What things?”. (Luke 24:18-19)

What things?!
Only the most earth-shattering possibilities for our nation, people, and time!

We both took a deep breath, exchanging looks of wonder, and relayed what we knew to this aloof traveler. “What things? The things concerning Jesus of Nazareth, who was a prophet powerful in action and speech before God and all the people, and how our chief priests and leaders handed him over to be sentenced to death, and they crucified him.” (Luke 24:19-20) Oh how our hearts were discouraged because we thought this Jesus was truly the one who would redeem Israel.  We thought He was the one who would be our King and fulfill all the prophets had told us concerning hope for our nation. Now, we didn’t know what to do with those thoughts.

Our traveling companion listened intently as we continued.
“Besides all this, it’s the third day since these things happened. Some women from our group astounded us. They told us they arrived early at the tomb, and when they didn’t find his body, they said they had seen a vision of angels who said he was alive.  Some of the other followers went to the tomb upon hearing this and reported finding it just as the women had said, but they didn’t see Jesus” (Luke 24: 22-24)

This was what we were in such disagreement about.
How could we believe such news?
Can we believe anything we hear at this point?
How could we entertain such heart-wrenching hope only to be let down again?

Our minds were spinning, and come to think of it, our hearts were burning as well.

As soon as the words left our lips, the traveler responded with shocking authority and knowledge. Here we thought this man was ignorant and foreign to our nation’s history and hope, yet he rebuked us for not understanding! “How foolish you are, and how slow to believe all that the prophets have spoken! Wasn’t it necessary for the Messiah to suffer these things and enter into his glory?” (Luke 25:25-26)

We barely had a moment to process what our ears were hearing because he immediately began teaching and interpreting the Scriptures for us, shedding light on all we had been discussing. He seemed to be telling us that Jesus indeed was the Messiah, and that we were blind to be doubting this!!
Certainly, there was more to this man than first met our eyes.

Cleopas and I hung on his every word until we came to our village.  We begged this traveler to stay with us, and he agreed. After all, it was nearly evening. If we were honest though, it could have been mid-day and we still would have found a reason to convince him to stay with us.  This man had answers. Who in the world was he?! We still didn’t know, but he had something our aching hearts needed.  Was it hope?

With comforting anticipation, the three of us reclined at the table together to enjoy a meal.  Our new friend gave thanks, broke the bread and handed it to us. In that instant we were astonished to suddenly recognize this was Jesus! It was Him!
Then just as quickly as we saw Him, He disappeared before our eyes!
Oh how our minds and hearts flooded with thoughts!

How had we not known we were with Jesus this entire time?

Was this why our hearts raced with fiery energy?

Was it why we didn’t bristle at His rebuke, but were drawn into His words?

Or the reason we begged so fervently for Him to stay with us?

We leapt from the table, leaving behind our uneaten meal and raced back to Jerusalem in the middle of the night.  When we found the eleven disciples we feverishly blurted out “the Lord has truly been raised and has appeared to Simon!” (Luke 24:34). Cleopas and I then took turns delivering every last detail of our day’s encounter with Jesus.  We shared all He had explained to us on the road.  As the words came tumbling out, God’s plan of redemption for Israel became clearer and clearer. Truly, Jesus was sent to the be the Lamb of God, to rescue His people from their sins.
We praised God He’d heard His people’s cries!
He had made a way!

Cleopas and I returned home on the Emmaus Road. This time, no longer squabbling, fighting and saddened, but instead unified and rejoicing over the risen Christ.

The One we had seen with our own eyes.

The One who made our hearts burn within us.

Because of Jesus, we would never be the same.

A Note About Cross
In this series, we are stepping into the shoes of various characters in Scripture and looked through their eyes as they saw the cross. We do our best to research the culture and times and all biblical support surrounding these individuals to give an accurate representation of their first-person perspectives as they watched the crucifixion, but we can’t be 100% accurate. These first-person stories are our best interpretation of how these characters viewed Jesus as He gave Himself up for us. Our hope is that by looking through their eyes, we will see the Cross differently as well, and be dramatically changed as we encounter the Savior!
Enjoy!

Thanks for joining us today as we journeyed into Cross Week One! Don’t miss out on the discussion below – we’d love to hear your thoughts!

Looking for other journeys from this theme?
Here’s a link to all past studies in Cross!

I often wonder how often we have been with Jesus and didn’t even know it. He comes and walks with us and talks with us. We only need to get still enough and quiet enough to see him and hear him.

Lord, help me seek for you more diligently in this coming year.

Yeah, that’s such a good and helfpul correlation Mandy – thanks for reading and sharing!