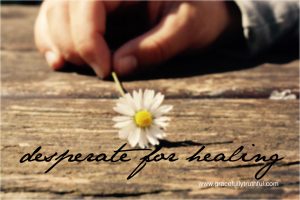 No mama likes having sick kids, but probably the only benefit is more snuggle time.
I was reminded of this again the other night as my 3-year-old woke up with a fever and made his way into our room. He came padding up to my side of the bed (always my side) and whispered in his sick little voice, “I just wanted to be with you. Will you hold my hand?”
My heart melted, despite my fatigue and I reached for his fevered little hand. Sharing sleeping space with our infant is one thing, but adding a sick toddler with flailing appendages is another, so I grabbed his pillow and blanket and suggested he sleep on a cushion right next to our bed. Again he groggily whispered, “But I want you to hold my hand.” So I sat on the floor rocking him a bit hoping he’d drift off, but he didn’t, so I moved him instead to the foot of our bed. I snuggled him up with his pillow and Curious George blanket as I held his hot little hand, hoping he’d fall asleep soon. After seemingly forever in a cramped position, I inched away to go back to my own pillow, but his little croaking whimper stopped me, “Will you still be able to reach my hand?”

He just wanted a touch.
He was tired and sick and weary.
He could have asked for a lot of things, but he only wanted one. My touch.
Sometimes it takes our desperation to point us to what we really need.

My 3 year old has no problem asking for a million things when he’s healthy; like candy and coffee and my phone and watching Curious George. But sickness changes him and makes him realize that he just needs me.

The same was true for a woman who lived centuries ago. She had been sick for 12 years….bleeding for over a decade! She had tried everything, spent everything, lost everyone, until she became so desperate that she only had one chance left.
“If I could just touch Him”
And so she got lost in a crowd of people pressing in on Jesus, with one secret motivation: “Touch Him.”
She pressed in, hiding in her shame, probably crawling around peoples’ feet until she saw it…the hem of His garment.
She reached out a shaky, desperate hand to touch Him.
Instantly she knew she was healed and in the next heartbeat, she was called out by the Healer.

“Who touched me?”, He called out. The crowd fell back and his disciples scoffed, “There’s people everywhere, Lord! Everyone is touching you!”

But Jesus had a plan. He wanted more for the woman than to simply stop her bleeding. He had seen this moment coming, intentionally healed her, and He wanted more.

The women froze, knowing she had been changed, but she was still so full of fear. What had she done?! She had been an outcast of society for a dozen years and now, here she was, on center stage before the Great Healer with every eye in the massive crowd on her.

Her body had been healed, but she was still desperate for healing.

She flung herself at the feet of Christ, shaking with fear as she managed to tell the Lord everything. As women generally do, she probably didn’t succinctly state, “I touched you and was healed.” Mark’s gospel hints that there was a more…an outpouring of her heart. She was an outcast, she was unclean, she was damaged, she was broken, she was desperate to be healed and so she told Him everything.
Graciously, the Healer does something unique next.
He calls her Daughter.

Unheard of! She who had groveled at the feet of the Messiah was now called “Daughter”?! Unthinkable!

Jesus goes even farther by telling the woman that her faith has healed her. This healing went much farther than physical; this healing was a faith thing, it was a healing of her heart. She wasn’t an object of shame anymore, she was “Daughter”, she was redeemed, she was whole in her heart.

The woman’s shame and her fear, her sickness, drove her to touch the Master and in return, she got much more than a healed body. Her desperation drove her to what she needed most, a wholly healed heart.

Like my son, and like this woman, I need to stop covering up my desperation with other stuff and let it draw me to what I need the most….simply to reach out and touch Him.

Thanks for joining us today as we journeyed into Desperate Week Two! Don’t miss out on the discussion below – we’d love to hear your thoughts!

I love this discussion! I was a bit emotional when I read it. The name of Jesus is a powerful force! I love how “Jesus goes even farther by telling the woman that her faith has healed her.” Her faith…all she had to do was believe! Mark 11:24 “Therefore I tell you, whatever you ask for in prayer, believe that you have received it, and it will be yours.” Great read!

[…] Looking for yesterday’s Journey Post? Check out Desperate For Healing! […]