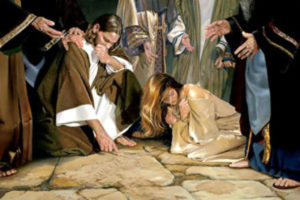 She walked up to me in a crowded, dim auditorium; her wrinkled hands clutched a small book in front of her while her long white hair cascaded down her shoulders. This woman, dignified and well respected in our small town, had known me since I was a small child and had just watched me receive my final awards of high school.
She made eye contact with me as her steps hastened.

“Kendra, the Lord told me to give this to you.”
Her hands gently placed a small magazine in mine.

I didn’t look at the magazine until I got home. I read “Upper Room” and my gaze lowered to a picture. My eyes burned with hot fresh tears. I immediately knew which story this picture came from, and I knew why God told her to give me this magazine.
Because that woman on the cover was me.

For the first time in a long time, I opened my Bible to read about the woman caught in adultery.

Here was Jesus, sitting on a dusty road in a busy town, while a crowd gathered around to listen to him teach. A group of scribes and Pharisees of all ages, came pushing their way through the crowd with a woman; a woman caught in the very act of adultery.
I can imagine a scribe holding her arm tightly, carelessly dragging her along to Jesus, anxious to catch Christ in a trap he was certain was fail-proof. Perhaps Jesus saw them coming and chose unceremoniously at that moment to sit, with humility, in the very dust of mankind. He clearly wasn’t looking for a fight.

“The Law of Moses commanded us to stone such a woman!” The angry scribe breathed with haughty victorious anger. And then for the scribe’s punch-line, “What do you say?”

Jesus, without saying a word, bent his head and began to write in the dirt.
But they pressed harder. Intent on justice.
So Jesus stood and declared that if any of them gathered there were without sin, they should throw the first stone.
Silence. Here was justice.
One by one the scribes and the Pharisees left while Jesus crouched back down and continued to write in the dirt.
As each man walked away, a piece of this woman’s fear went with him.

The crowd of onlookers held their breath as they waited anxiously to see what Jesus would do next. It was just him with the woman now, the only person in the entire world who could have actually thrown a stone at her, and He gently asked, “Woman, where are they? Has no one condemned you?” Her voice just loud enough for Jesus to hear, “No one, Lord.” And he looked at her, with so much love and compassion, because that is who he is, and he said,
“Neither do I condemn you; go, and from now on, sin no more.”

The tears rolled heavily as I finished reading verse eleven and held the magazine up so I could gaze at the picture of the desperate woman before Jesus.
The words of Jesus echoed to my soul, “Neither do I condemn you…”

Here I was, a broken and hurt teenager, living in sin and guilt and shame.
I was so desperate to feel loved in a way I had never felt love, that I gave my heart to someone who didn’t deserve it and before I knew it, found myself “caught in the very act” of my own sin.
I knew this woman from the Bible, because she was me; a woman so desperate for love that she was willing to do anything to gain affection. Even at the cost of finding herself in the absolute depths of despair, perhaps moments from her own death.
Like her, I was not looking to the source of Love. I was looking for love in all the wrong places. But when I finally found myself at rock bottom, all I had to do was look up, and He was there. Love was there. The entire time.

“Woman, where are they?”

And as her eyes lifted to meet Jesus’, she saw Love for the very first time.

Thanks for joining us today as we journeyed into Desperate Week Two! Don’t miss out on the discussion below – we’d love to hear your thoughts!
Click the above image for today’s Digging Deeper!

I love how He never has to search for us. He always knows exactly where we are and what we need…but He knows the exact moment our hearts will be softened and contrite. In that moment, He beckons us out of our dusty, dry ways and offers us Living Water. He doesn’t condemn us – but He implores us to turn from our sin. I so relate to this. Love you, Kendra!

This is what I love about a *personal* Savior. How beautiful and rich to be loved and KNOWN and called into so much more! Good words, Merry.