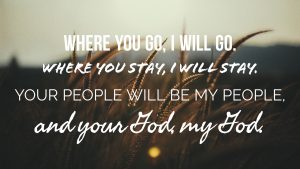 I have always been a nomad. By the time I was in eighth grade, I’d been in eight different schools in three new states. Even in my short year and a half of marriage, we have lived in two states and have just settled into our third home. Despite all of the good that came from our gypsy ways,  I have longed to belong many times over. I know all too well the strong feeling which can only be described as a form of homesickness, that comes when people around us have history with each other and have known one another for a long time. I know that twisted-knot feeling of wanting to stand out, but wanting to blend in all at the same time.

The Bible is speckled with people who didn’t belong: Moses, Jonah, Esther, John the Baptist, and even Jesus! But Ruth’s story is so wonderfully spectacular because in the end, not only did she belong, but she belonged to the lineage of King David.
Even more incredible… the lineage of Jesus!

Ruth’s life was marked with sorrow. Both her brother-in-law and husband passed away, preceded in death by their own father. She was left as a young widow with her sister-in-law, Orpah, and mother-in-law, Naomi. Their spirits were bound together because of the similar shades of grief, and they found solace in one another’s company. Naomi loved Orpah and Ruth as if they were her own daughters, and longed for them to find new love and new joy in their young lives. With a heavy sadness, Ruth and Naomi kissed their sweet Orpah goodbye. However, Ruth could not be persuaded to leave Naomi’s side. Naomi begged her, pleaded with her, and even tried demanding Ruth to leave and look for love.

Ruth looked into Naomi’s eyes, and solemnly spoke this vow: “Where you go I will go. Where you stay I will stay. Your people will be my people, and your God, my God.”

This commitment to a life of servanthood and faithfulness was a testament to Ruth’s character and further,
the reason the Lord chose to bless her.

Naomi and Ruth returned to Naomi’s homeland from a lifetime ago. Already an outcast because of her nationality, Ruth found herself at the lowest rank in society because she was a widow. They had no money, no food, and no way to get a job. That is, until Providence stepped in.

Ruth found herself scrounging for the wheat that had fallen while being harvested in a field that belonged to an elite man of the city named Boaz. They encountered each other in something that can only be defined as a Divine Appointment. Boaz’s eyes met Ruth’s as she bowed her head in humility…

The rest, as they say, is history.

Boaz redeemed Ruth and her family name. He lifted her up from the bottom of society and made her someone who belonged in their city and someone whose name we can find listed hundreds of years before Jesus’.

Boaz and Ruth later became the grandparents to a man named Jesse, who had many sons, but called his youngest David. Ruth’s great grandson would go on to slay lions and a giant, rule an entire nation, and be known as a man after God’s own heart.

Because of Ruth’s commitment to not only serving Naomi, but serving her God as well, the Lord blessed her! He saw her heart and knew how desperately she yearned for a lasting relationship with her mother-in-law.
God saw her trying to blend into a new community.
He knew her loneliness.
He knew her sorrow.
He knew her heart…. and chose to bless her because of her faithfulness.
God sent her a redeemer in the form of a kind and prestigious man named Boaz.

Through the years I have found myself aching to be accepted by students, friends, other mamas, and ministry partners.

So often I forget that I already belong.
The Lord has sent me a Redeemer! A kind and prestigious man who lifted me up from my sin and made me someone who belongs to the Kingdom of Heaven and someone whose name you can find written as a follower of Christ.

We don’t have to be desperate to belong.
Because of Jesus, we already do.

Thanks for joining us today as we journeyed into Desperate Week Two! Don’t miss out on the discussion below – we’d love to hear your thoughts!