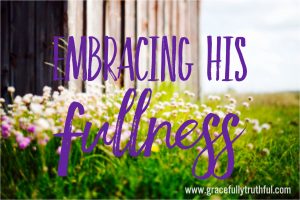 Words penned centuries ago, but oh don’t they echo a piece of your life like they do mine sometimes? So much doing, hoping, living, working hard, and it just…doesn’t….cut it. All this striving seems like we are investing our “everything” into a “bag with holes.”

Friend, lean in, this is not the abundant life Jesus offers.
Struggles in following Jesus? Oh yes.
Pain in the doing? Definitely.
Costly sacrifice in giving God your all? It’s a guarantee.
But never feeling full or satisfied? Big Fat No Way!

These words were those of Haggai, the prophet; and his ancient message hits me hard today in the 21st century.

Let me set the stage a bit….
The Jews were exiled to Babylon for continued disobedience and worshipping false gods decade after decade. Roughly 70 years passed and God, through an incredibly miraculous string of events, opened the door for His people to leave captivity and go home to Jerusalem. He commanded them to rebuild His temple that all nations might know that He was the one true God.

Simple enough, right?
One couldn’t ask for clearer direction from God (something most of us have probably wished for at one point or another). But the newly freed Jewish captives, those few that actually decided to take God’s offer of freedom and return home, found not only a destroyed Temple, but also discovered that they would be housing their families in makeshift tents and rough hewn abodes because so much desolation had happened at the hand of the Babylonians 70 years prior.
The Jews set to work, but focused on the wrong task and spent almost 20 years trying to build “paneled houses” for their families. They worked the hard ground vigorously, only to reap meager crops. All of their labors emptied themselves into a “bag with holes in it.”

See, they had God’s truth,
they knew His directive,
….but they marched to the beat of their own drum instead.

They knew of God’s grace,
…..but they took advantage of it for almost 2 decades!
They respected neither aspect of God’s character
and the result was pitiful emptiness instead of abundant fullness.

And so the mirror of God’s word turns towards my life….
Sometimes the truth I know my God is calling me to just seems too difficult and so much “other” seems far more important. Sharing the gospel (and actually talking!), loving my husband when I don’t feel like it, parenting with intentionality, prioritizing consistent quiet time with God, loving the unlovable, living generously. Is there grace for disobedience? Of course! But as Paul exhorts, “shall sin increase that grace might increase? NO!”

Fullness is found in obedience
that flows from love, not legalism,
as we rely fully on God’s grace and sufficiency for our strength.

The Lord spoke His truth. Hag 1:7
The people feared (or stood in awe) of Him, Hag 1:12 (our response)
The Lord stirred up the spirit of the people (grace came before works!), reminding them of more truth, that He was with them. Hag 1:13
and the people were moved to whole-hearted, obedient action. Hag 1:14 (our response)

Was the task overwhelming for the Jews of Haggai’s day? Incredibly so.
But we can relate to that, can’t we?
A seemingly dead marriage.
Ruined finances.
A wayward child.
Loneliness.
Death.
Illness.
A haunting past.

But the Great God Almighty speaks into our empty places just as boldly today as He did to Haggai’s hearers,
“Be strong! Work, for the Lord is with you! My Spirit remains in your midst!”
Can there be better encouragement than to know that you are neither alone nor without strong confidence?!

This prophecy points straight to Jesus and the rich inheritance for those who follow Christ!
Right here in the Old Testament!

I hope you will make time to click below on today’s “Digging Deeper” to see how all of that plays out, but for now, know that God longs to bring you into far more abundance and satisfaction than you’ve ever dreamed.
Stop settling for tossing your investment into “a bag with holes,”
and instead secure your soul in the hands of the One who lavishly loves you.
Embrace the fullness He’s freely offering inside His boundless grace and beautiful truth!

Thanks for joining us today as we journeyed into Fullness! Don’t miss out on the discussion below – we’d love to hear your thoughts!
Click the above image for today’s Digging Deeper!

Looking for other journeys from this theme? Here’s a link to all past studies in Fullness!