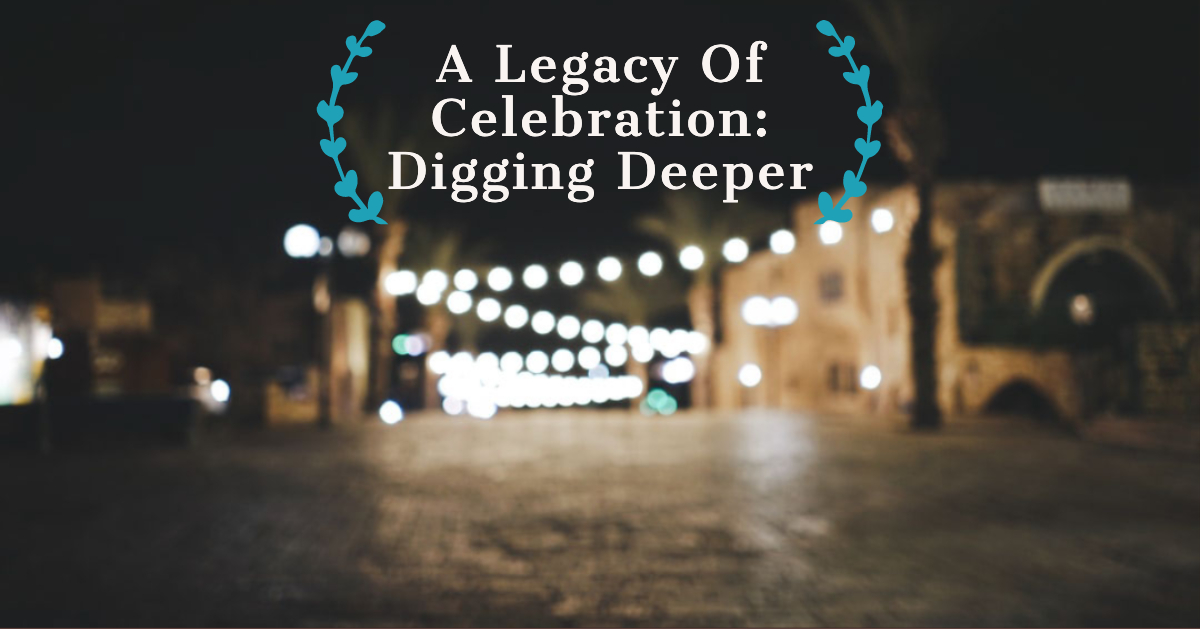 Today is 2-for-1 Friday!
Check out A Legacy Of Celebration!

1) Who was dead in trespasses and sins?

2) What is the key contrast in the passage?

3) Why does Paul emphasize the importance of knowing we are saved by grace alone?

And you were dead in your trespasses and sins 2 in which you previously lived according to the ways of this world, according to the ruler of the power of the air, the spirit now working in the disobedient. 3 We too all previously lived among them in our fleshly desires, carrying out the inclinations of our flesh and thoughts, and we were by nature children under wrath as the others were also. 4 But God, who is rich in mercy, because of his great love that he had for us, 5 made us alive with Christ even though we were dead in trespasses. You are saved by grace! 6 He also raised us up with him and seated us with him in the heavens in Christ Jesus, 7 so that in the coming ages he might display the immeasurable riches of his grace through his kindness to us in Christ Jesus. 8 For you are saved by grace through faith, and this is not from yourselves; it is God’s gift— 9 not from works, so that no one can boast.

1) Who was dead in trespasses and sins?
In chapter 1, Paul began a letter to the believers in Ephesus by stating, “Paul, an apostle of Christ Jesus by God’s will: To the faithful saints in Christ Jesus at Ephesus.” As the letter continues, he gives us insight into who he is addressing in verse 15, “This is why, since I heard about your faith in the Lord Jesus and your love for all the saints, I never stop giving thanks for you as I remember you in my prayers.” As fellow believers with Paul, he was encouraged by their faith, but it wasn’t always this way. In chapter 2, Paul reminds them (and himself) to remember who they once were apart from God’s grace. Commentator, Bob Utley, says Paul is careful to “describe the pitiable state of humanity” apart from grace. The apostle was so overcome by the thought of his life before trusting Christ, he couldn’t help from moving from one thought to another without pause. In the Greek text, verses 1-7 are one long sentence. He told them, “you were dead.” It was these saints for whom he continually thanked God who were once “by nature children of wrath.” In verses 2-3, Paul goes into detail about their previous state: worldly, hellish, fleshly, and destined for wrath.

2) What is the key contrast in the passage?
Verse 4 is the hinge of these verses. Essentially, it’s the first two words of verse 4 that bridge the huge gap between the condition of humanity and the hope we can have despite it. BUT GOD. “The Divine counter-fact now comes in, all the brighter for the awful contrast.” (Cambridge Bible for Schools and Colleges) The preceding verses have communicated Paul’s awareness of what it’s like to live without the hope and freedom that Jesus Christ brings. He portrays the life of an unbeliever with all the intensity he can muster. A life apart from God leads to disastrous consequences and unavoidable destruction. BUT GOD. It’s an emphatic reversal of what’s pictured in verses 2-3. This two-word phrase “interposes to rescue those who would otherwise plunge into irretrievable ruin.” (Pulpit Commentary) Paul’s run-on sentence gives the Bible student great insight into his passion. In verses 1-3, Paul wants his reader to feel the hopelessness of our sinful condition. None of them, and none of us, are more than a ‘dead man walking’. But when God appeared, hope became eternal for even the worst of sinners! (1 Timothy 1:15-17)

3) Why does Paul emphasize the importance of knowing we are saved by grace alone?
As defined by many Bible scholars, grace is “God’s unmerited favor”. Coming alive through Christ Jesus only happens by God’s grace. No one has done, or can do anything, to earn or merit salvation. As Paul reminded the believers at Ephesus, everyone deserves God’s wrath because everyone who has ever existed has sinned against Him. (Romans 3:23) The reason the apostle painstakingly rehearsed the previous condition of the Ephesian saints was to reveal the riches of grace. If humanity apart from God is not under His wrath, then Jesus’ death meant nothing to anyone. But if Jesus paid the penalty we are under because of our sin, we should be as overwhelmed as Paul about our salvation! Paul prayed that the believers would know God’s surpassing power towards them. (Ephesians 1:17-19) It is that very same power that raised Jesus from the dead and seated Him forever at the right hand of God. (Romans 8:11) Were it not for God’s rich grace towards us, we would still be dead in our sin. It took the mighty power of God, and the redeeming grace of God, to save us.

1) Who was dead in trespasses and sins?
It was ME! And it was every human who has ever existed. Through the very first man and woman, sin came into the world. (Romans 5:12) Apart from the saving work of Christ, we have all been the walking dead since that very moment. “I once was lost in darkest night, yet thought I knew the way. The sin that promised joy and life had led me to the grave. I had no hope that You would own a rebel to Your will. And if You had not loved me first, I would refuse You still.” (All I Have is Christ by Jordan Kauflin)
If we only read verses 1-3 in this passage, we might lose hope. Thankfully, Paul describes people who were in a certain condition. In the past, we have all been in the same place. Once wandering. Once lost. Once dead. For those who haven’t trusted Christ, these are still in this place of death.

2) What is the key contrast in the passage?
BUT GOD! Oh, those two amazing and wonderful words! They are quite possibly the two most hopeful words of the Bible. Every negative event or circumstance that seem to devastate our lives are radically altered by the deep and lasting truth of BUT GOD. It was the mantra of many of the Bible’s characters throughout history. The psalmist declared it, “Like sheep they are headed for Sheol; Death will shepherd them. The upright will rule over them in the morning, and their form will waste away in Sheol, far from their lofty abode. But God will redeem me from the power of Sheol, for he will take me.” (Psalm 49:14-15) Paul never stopped preaching it. (Acts 13:29-31, Romans 5:7-11) And I can never stop singing about it!
“But as I ran my hell-bound race, indifferent to the cost, You looked upon my helpless state and led me to the cross. And I beheld God’s love displayed; You suffered in my place. You bore the wrath reserved for me. Now all I know is grace. Hallelujah! All I have is Christ! Hallelujah! Jesus is my life!” (All I Have Is Christ!)

3) Why does Paul emphasize the importance of knowing we are saved by grace alone?
My friend had a difficult life. She experienced suffering at the hands of others. She also made some bad choices in her life that left wounds and scars. One day she said to me, “I just wish I had been good like you.” What a statement! I remember being stunned. For one thing, I knew just how much I wasn’t good, but more than that, I realized she hadn’t quite understood the real meaning of grace. Grace has nothing to do with US! There has never been anyone who was so bad God’s grace wasn’t enough. And there has never been anyone so good that God’s grace wasn’t necessary. We were never meant to be on display on our own merits or for our own glory, but we are to display the immeasurable riches of God’s grace.
“God has chosen what is insignificant and despised in the world—what is viewed as nothing—to bring to nothing what is viewed as something, so that no one may boast in his presence. It is from him that you are in Christ Jesus, who became wisdom from God for us—our righteousness, sanctification, and redemption, —in order that, as it is written: Let the one who boasts, boast in the Lord.” (1 Corinthians 1:27-31)

What do YOU think?! Share Here!
Missing the connection to our other Journey Study today?
Catch up with A Legacy Of Celebration!

This is Esther Week Three!
Don’t miss out on the discussion!
Sign up to receive every GT Journey Study!