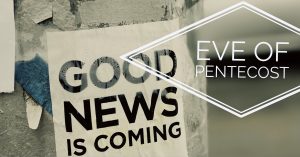 Surely, they felt hazy, like they were walking in some kind of dream.
It had been a whirlwind of emotions and a rollercoaster of flat-out unbelievable scenarios. They themselves wouldn’t have believed it if they hadn’t lived it, seen it with their own eyes. Add to that, the over 500 other witnesses who had seen exactly what they had.
The resurrected Lord walking among them.

No, what happened could not be denied or falsified.
The death and resurrection of Jesus Christ was the most real thing any of them had ever experienced. And their joy at Christ’s resurrection, even now at His ascension as Lord of all, they were jubilant!
But, now what?
It was the question not one of them dared speak out loud, but its pressing presence was almost palpable as they gathered.

It had been a horrific tragedy to watch their Jesus shamelessly humiliated and crucified on a Roman cross, seemingly deftly pinned under the ruling authority the disciples, and the rest of the Jewish population, had thought the Messiah would surely rescue them from. Rome’s tyranny.
But He didn’t.
Their Messiah, their Savior, had died a torturous death before their own eyes.
The sorrow of their souls.
The anguish of their hearts as precious, precious memories swirled before their eyes from the last three years. The healings, the teaching, the miracles, the radical transformation of everyday lives.

After His death, they had gathered and hid, literally fearing for their lives. Jesus wasn’t exactly friends with the Pharisees. Were their lives at risk now too?
But then HE had appeared.
They’d seen their Jesus, the very One they had watched be brutally killed.
He ate with them.
Touched them.
Called them into more.
Hope like never before had swept them away into an incredible euphoria of worship.

But now, stumbling down the Mount of Olives after Christ had risen into the sky.
Stunned again.
Their Jesus gone again.
Angels again, as their eyes had strained to catch another glimpse of Him beyond the clouds.
What? Why?
Now what?

The question begged to be answered.
The immense vacuum of their lives was painfully obvious.
Jesus’ resurrection was radical and incredible.
But the 12, no, the 11… and another ache filled their hearts at the remembrance of Judas’s death and betrayal, were alone again.
Alone with the greatest news on earth.
Still so….empty…somehow.

Going back to fishing seemed ludicrous after Jesus had met them on the beach a few weeks ago after His resurrection, inviting them to be fishers of men.
But how?
Peter looked around, for as devoted as they had followed their Jesus, he knew as well as any of them…they weren’t learned men. They were fishermen, tax collectors, just ordinary Jews.
Yes, Jesus had changed everything for them.
But still….what now?

So the band of disheveled, emotionally windblown brotherhood of eleven walked back to Jerusalem in stunned, surreal silence.
“Did you see….?”
Nodding heads.
“How….?”
Confused faces and shrugging shoulders.
For as purposeful as the message Jesus’ clear, strong voice of “Go therefore into all nations and preach the gospel” had delivered to them, they knew they had no power.
All nations?
Who would believe them?
So, on to Jerusalem they walked, just as Jesus had told them to do, eyes on their dusty sandals.
Go.
Wait.
“You will receive power”, Jesus had said as He was being lifted up into the clouds.
“You will be my witnesses ….in all the earth”, He had said.

For how long would they wait for this power?
Shrugging silence.
What to do while they waited?
There really only was one answer to that, and they had learned it well in the past 3 years as they had followed Jesus, studying His patterns.
In fact, as the 11 climbed the stairs to the Upper Room, breathing in the familiarity of the space, and allowing the memories to flood over them anew, it was the only thing that even came close to feeling right and adequate considering the circumstances.
Prayer.
Worship.

And so they gathered, Peter and John and James and Andrew, Philip and Thomas, Bartholomew and Matthew, James the son of Alphaeus and Simon the Zealot and Judas the son of James along with the beloved women who had followed Jesus everywhere He went, and they prayed.
They wept, they worshipped, they were comforted by each other and reminded each other of funny stories of their time over the past 3 years. The way their minds and hearts had been opened and laid bare before the Lord.

9 days they had waited now.
9 days of living in the constant state of perpetual unknown.
Knowing they were called to ignite world-wide change, but having no idea how to go about it.
But they knew God was faithful.
He had called them, He would equip them.

But the days were getting so long.
Anxiety was high, but anticipation was too.
If the time for waiting was this long,
and the need for prayer and worship was this intense,
and the God Almighty they had come to know through the visible, flesh-wrapped image of the invisible was indeed faithful and good,
then soon,
the gift of waiting would surely be beyond description!

The next day, the gift of the Holy Spirit would come upon the disciples in the Upper Room.
They would be radically changed in ways greater than even when they had walked close enough to Jesus to smell His sweat and touch His skin.
The power of the Almighty would dwell within them.
It was this power that would ignite world-wide change.
This power that would transform common men into passionate leaders, speakers, missionaries, pastors, shepherds, lovers of Jesus. Lovers of people.

Imagine what the Father’s Spirit will do through you!
Anticipate Him.
Worship Him.
Wait for Him.

Thanks for joining us today as we journeyed into Eve Week Three! Don’t miss out on the discussion below – we’d love to hear your thoughts!

Looking for other journeys from this theme?
Here’s a link to all past studies in Eve!