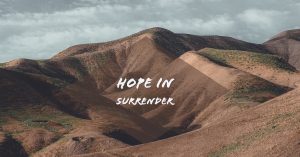 You can do hard things.

Ugh.
These words are not always the easiest to embrace.
However, they are truth-filled ones, especially since Jesus is our source of strength and our hope to press on.

A few years ago, I would have read those words and been tempted to throw myself a pity party complete with confetti, a box of tissues, and a large mocha with whipped cream. I didn’t want to do hard things. I simply didn’t want to do “hard”.

However, when I recently read these words, they resonated not as a directive but as an invitation. I can do hard things. No longer did the emphasis in that statement rest on the word “hard”, but on the word “can.” With that, the joy of the Lord became my strength as hope unfurled within me.

I CAN do hard things.
I am an overcomer.
Instead of wallowing in a victim mentality (cue pity party), I’ve made the choice to do hard things even if I do not want to.
Because there is value in perseverance, obedience, and….. surrender.

Need an example? A perfect example (literally, a PERFECT example)?
Jesus, the Son of God yet fully man, willingly died on the cross to take our sins even though He had led a sinless and blameless life.
He did the hard thing.

I imagine that a soon-to-be mom whose due date is looming has some angst regarding the actual birth. That will be a hard thing, but there is such great value in surrendering to the process. The pain may endure for a time, but the joy it brings as she holds her newborn vastly outweighs the momentary struggle. The hope of what is to come spurs her on (the contractions help too).

So, may this study serve as a formal invitation to rise up and do hard things.
Is it difficult sometimes?
Yes. Hence the hard part.
Is it worth it? YES.

Even Paul echoed this sentiment, but he also cited the source of his ability and motivation.
“I can do all things through Christ who gives me strength.” (Philippians 4:13)
Paul knew the secret for absolute success to doing hard things.
Jesus Christ.
God calls us to total surrender as He does His mighty work through our humble submission. Paul had learned to trust God’s strength to supply his own.

He’d experienced the faithful character of His God, and he knew beyond all doubt that with God leading the way, and hemming him in on all sides, doing hard things was always possible.

Since Paul is a prime example from the New Testament (besides our perfect one mentioned earlier), let’s visit an Old Testament example and peek into the life of Abraham.

Abraham’s life is chronicled in several chapters in the book of Genesis (12-24) and his name is referenced all throughout the Bible. He received the Lord’s promise that He would become a great nation, with descendants numbering beyond what anyone could count.

One problem: Abraham and his wife, Sarah, had no children and were rapidly careening towards the ages of impossibility on that front.

Yet the Lord promised they would become parents.
And so they waited.
And waited.
And waited for years until Sarah decided she could no longer do this hard thing of believing in the midst of hopeless circumstances.
So she gave her maidservant Hagar to Abraham and Ishmael, their son, resulted.

However, this was not the child the Lord had promised, and in the fullness of time, Sarah conceived and Isaac was born.

Years of waiting, expecting, and trying to make solutions on their own came to an end when Isaac’s young cries filled the air.
The Lord had proven Himself faithful and almighty.

Several years later, the Lord commanded Abraham to sacrifice that same child of promise, Isaac, as a burnt offering. The amazing part is that Abraham obeyed immediately.
Scripture doesn’t say he prayed and fasted for months or spent hours agonizing with Sarah over the Lord’s command. The Word says he “rose early” and began the journey with Isaac in obedience. Like Paul, he had learned to hope and trust in God’s faithful heart, and chose to wait for God to provide.

And the Lord did provide.

Isaac was bound on the altar, knife hovering above him,
when the Lord proved faithful again.
He provided a ram as an offering in place of Isaac.
The Lord’s faithfulness was displayed again through a choice to trust in the face of a hard thing. Abraham surrendered and he held tight to the hope of a good and gracious God. The hope that even if the Lord did not intervene He would still fulfill the promise of becoming a great nation.

In Jeremiah 29:11 God spoke to the Israelites at the beginning of decades of exile.
Israel faced hard years, and the Lord spoke His goodness as a lifeline through those.
He did not remove those years.
He led them through the hard things.
He gave them the opportunity to truly know Him, to trust His good heart, and He promised them a future and a hope through it.

As Christmas approaches and we celebrate Christ’s birth,
let’s not forget the rest of the story.

Jesus surrendered heaven to dwell with us that we might live eternally with Him.
He willingly became the sacrificial lamb that was slain.
While Isaac was the promise that almost died,
Jesus was the Promise that came to die.
He came to do hard things so that through Him,
we have the hope and strength to do the hard things too.
For unto us a child is born.

Thanks for joining us today as we journeyed into Glimmers Week One! Don’t miss out on the discussion below – we’d love to hear your thoughts!

Looking for other journeys from this theme?
Here’s a link to all past studies in Glimmers!