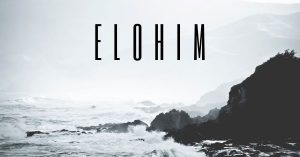 “In the beginning, [Elohim] created the heavens and the earth.”

In the first sentence of Scripture, we are introduced to our Author and Creator with the Bible’s most common name for God, “Elohim.” We are told God was present in the very beginning, before anything else existed and, from Himself, created all we know, see, touch, and feel today.

Let me share a little context for our discussion of this foundational name of God, “Elohim”.

So why would Genesis 1:1 use Elohim instead of Eloah? And why would the writers of the Scriptures use Elohim to refer to God, instead of a more specific and personal name like the one revealed to Moses in Exodus 3, “Yahweh”?

The use of Elohim in Genesis 1:1 is intentional. By using Elohim, the author is already revealing to us the concept of the Holy Trinity. Three divine, unique persons: the Father (Creator, Sustainer), the Son (Redeemer), and the Holy Spirit (Advocate) in one divine God. The Elohim Trinity was present from before the beginning of time at the creation of the universe. From the beginning of the world’s existence, the great and mighty power of Elohim is being revealed.

Scripture uses the word ‘elohim’ as a title for other gods and spiritual beings, too. Not only did followers of the One True God use Elohim to refer to God, but it was the common Hebrew word for discussion of the gods of other religions, whose worship caused people to turn away from their mighty Creator Elohim.

Therefore, Scripture repeatedly emphasizes how our Elohim is different and set apart from other elohim.

“For the Lord your God is the God of gods [Elohim of elohim] and Lord of lords,
the great, mighty, and awe-inspiring God,
showing no partiality and taking no bribe.” (Deuteronomy 10:17)

“Give thanks to the God of gods [Elohim of elohim].
His faithful love endures forever.” (Psalm 136:2)

The God of these Scripture verses is mighty, the Elohim above all other elohim! The Spirit-inspired authors of Scripture made the distinction that even though there were countless other gods and idols, false as they were, our Elohim was sovereign above them all. He alone is the God whom we serve and worship.

His might is proved to us through Elohim’s greatest act of power, the salvation of His people through the life, death, and resurrection of Jesus.

“[. . .] ‘there is no God but one.’
For even if there are so-called gods, whether in heaven or on earth
—as there are many ‘gods’ and many ‘lords’ —
yet for us there is one God, the Father.
All things are from him, and we exist for him.
And there is one Lord, Jesus Christ.
All things are through him, and we exist through him.” (1 Corinthians 8:4-6)

“And when you were dead in trespasses and in the uncircumcision of your flesh,
he made you alive with him and forgave us all our trespasses.
He erased the certificate of debt, with its obligations, that was against us and opposed to us,
and has taken it away by nailing it to the cross.
He disarmed the rulers and authorities and disgraced them publicly; he triumphed over them in him.” (Colossians 2:13-15)

Paul reminds us even though other so-called elohim seek our attention and worship, rule with authority on earth, and attempt to pull us away from our Creator, we are subject to one Elohim and one Elohim only. We are subject to the Elohim who created us, sustains us, and gave us Jesus.

I don’t know about you, but I am constantly bombarded with distractions seeking to pull my attention from the Elohim of elohim. They come in the form of never-ending household chores and errands, the pull of TV and social media, and sometimes even my relationships with others can become more important than my relationship with Elohim.

While none of these are inherently bad, they easily become idols and false elohim when I prioritize them above my mighty Elohim.

Jesus came to once and for all end the power of sin, death, the devil, and all false elohim forever. He took on our sin and the wrath of God on our behalf through His death, and the power of all other authorities was broken when He defeated death itself! Now all authority on heaven and earth belongs to our mighty Elohim alone!

We have the gift to serve our Elohim and be witness to His mighty power through Jesus to all the ends of the earth!
All praise be to the Elohim of elohim!

Thanks for joining us today as we journeyed into He Week One! Don’t miss out on the discussion below – we’d love to hear your thoughts!

This is great. Such wonderful scripture choices. One cool activity I had kids do was to listen to Genesis 1 in Hebrew and hop up every time they heard Elohim. It was a great lesson thar the focus of the fIrst chapter of genesis is God – not creation. https://www.mechon-mamre.org/p/pt/pt0101.htm

Thank you, Penny! What a great activity to get the little ones focused on our Elohim! Thanks for teaching them well!

Love this, Penny!! “the focus of the first chapter of Genesis of GOD, not creation!” well said!