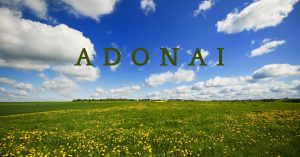 “Through your love and through the ram,
You saved the son of Abraham;
Through the power of your hand,
Turned the sea into dry land.
To the outcast on her knees,
You were the God who really sees,
And by your might,
You set your children free.”

Amy Grant.
Just her name triggers an avalanche of childhood memories.
From concerts, to cozy Christmases at home, to road trips with my mom, and, oddly enough, my alone time playing with Barbies, because yes, I totally named one after my favorite singer.

Her voice, along with Rich Mullins’ and Michael W. Smith’s, filled the quiet and stillness of my childhood home, and has worked its way into all of my memory’s cracks and crevices. One of the first songs I remember singing along to was,  “El Shaddai”.

As I’ve studied Adonai, and pondered this Journey Study, the song has been echoing in my mind constantly …

“El shaddai, el shaddai,
El-elyon na Adonai,
Age to age you’re still the same,
By the power of the name.”

This song was my first, and until recently, only interaction with the term Adonai. I’ve heard this name of God over the years, but never understood its meaning. As I looked up the lyrics to refresh my memory, I had the “Aha!” moment I get every time I write a Journey Study. I need the topic to be real for me, to hit home. Then I am able to share what God is revealing to me.

Adonai is used throughout Scripture, not only in reference to God, but to anyone with authority as “lord” or “master.” Jews have been careful not to take the Lord’s name in vain, and often believed YHWH (Yahweh) to be so holy, they couldn’t even utter His Name aloud. In fact, Jews will still say Adonai, even if YHWH is written.

Finally, in Scripture, YHWH is often used in God’s dealing with the Jews, while Adonai is used in His dealings with Gentiles. This subtle change paints a beautiful picture of God’s heart and character; as my friend, Rebecca, explains, “He wasn’t the one who changed; neither was His message of hope and redemption. Rather, simply by being called a different name, He flung wide the door for all to see He is for ALL peoples and ALL cultures.”

The idea of a God for all peoples of all cultures is seen throughout the Bible. Immediately, I am reminded of the Ninevites and their story of salvation in the book of Jonah. The inhabitants of the infamous city of Nineveh were Gentiles, yet God used His prophet to declare the freedom and peace found in repenting from sin and living for the Lord.

I’m reminded, again, of when Philip shared the Gospel with the Ethiopian traveler. The Holy Spirit directed Philip to a chariot on the road, where Philip had the opportunity to present the Gospel to a man who was so excited about the Good News of Jesus, he insisted on being baptized that very moment!

Now back to my “Aha” moment …
“To the outcast on her knees…
You were the God that really sees.”

These lines struck a chord in my heart as I imagined a myriad of encounters between God and an outcast woman in which He proved He saw her, both for who she was and who He created her to be . . .

Rahab. The prostitute.
Hannah. The wife who struggled with infertility.
Esther. The Jewish orphan-turned-Gentile-queen.
The Samaritan woman who was living in shame from failed marriages and relationships.
Maria Skobtsova. The single mom who was divorced twice and eventually became a nun.
Jackie Hill Perry. The woman who was a lesbian.
Kendra Moberly. The woman who struggled with sexual sin in high school, shame throughout college, and eventually became a single mama to three girls.
You. All of your story.

And we’re just the very tip of the iceberg.

We get yet another beautiful glimpse of who He is when we read Deuteronomy 10:12-22.
This whole section of Scripture gets my heart beating faster and my eyes welling with tears, but for me, the most meaningful part is in verses 17-19:

“For the LORD your God is the God of gods and the Lord of lords [read: Adonai of adonais], the great, mighty, and awe-inspiring God, showing no partiality and taking no bribe. He executes justice for the fatherless and the widow, and loves the resident alien, giving him food and clothing.”

We serve a God who is for ALL PEOPLE, from orphans and widows to immigrants. He is YHWH and He is Adonai.

He is MY Adonai.

He is my Lord.

And He is Lord for all people.

Thanks for joining us today as we journeyed into He Week One! Don’t miss out on the discussion below – we’d love to hear your thoughts!