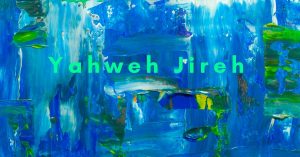 I have never felt more “unseen” than in my first few years of motherhood. With my husband coaching late night games and my son often rising before dawn, I spent most mornings wondering how I was going to make it through another fourteen hour day alone with the kids.

Those were difficult, yet fruitful years, as I leaned into my desperate need for God. I needed Him for strength, grace, peace, and joy, and He provided me all of those and more. During those long, lonely days, I came to know Him as Yahweh Jireh, “The Lord Who Provides.”

Abraham was the first to call God by this name. He did so just after an enormous test of faith, when God asked him to sacrifice his one and only son, the son born of God’s promise to make Abraham a great nation.

In Genesis 22, we watch as Abraham binds his son, Isaac, and lays him on an altar. Abraham raises his arm, fully prepared to use the knife he holds, only to hear the Lord call out and stay his hand. As Abraham looks up, he sees a ram caught in a thicket of thorns. It is God’s provision, a substitute sacrifice to stand in Isaac’s place. Abraham’s son no longer needed to die, God had Abraham’s full attention.

Yahweh Jireh can be defined as both “The Lord Perceives” and “The Lord Provides.” These definitions may seem at odds, but as we will see, they are really two steps in a single action.

A great example of this is found in Numbers 11:4-23. In this passage, the nation of Israel is grumbling against their leader, Moses, and ultimately against the Lord. They are tired of the manna God has provided them and desperate for meat. They are so desperate, in fact, they begin to long for the land of their captivity, Egypt.

Moses seems indignant and replies, “I am in the middle of a people with six hundred thousand foot soldiers, yet you say, ‘I will give them meat to eat, and they will eat for a month.’ If flocks and herds were slaughtered for them, would they have enough? Or if all the fish in the sea were caught for them, would they have enough?” (Numbers 11:21-22)

The Lord responds, “Is the Lord’s arm weak? Now you will see whether or not what I have promised will happen for you.” (Numbers 11:23)

The Lord makes it clear He will be the one to provide for Israel, not Moses, and indeed He does. Not only does He perceive both the Israelites’ “need” and its origin in attitudes of ungratefulness, but He provides remedies for both.

If we fast forward to the New Testament, we see another instance where Yahweh Jireh perceives and provides. In John 6, Jesus is wrapping up a full day’s teaching alongside the sea of Galilee, when He looks up at the gathering crowd. Moved with compassion, He looks over at Philip and asks, “Where will we buy bread so that these people can eat?”. (John 6:5)

I imagine Philip’s pulse quickened at the question, his mind reeling with the impracticality of finding, much less affording, enough bread to feed the thousands before him.

“Two hundred denarii [nearly a year’s wages] worth of bread wouldn’t be enough for each of them to have a little,” Philip responds, despairingly. (John 6:7)

But Jesus never intended for Philip to purchase bread. The text tells us before Jesus asked the question, He had determined a solution. He would provide the food and He would do it through the meager offering a small boy’s lunch: five loaves of bread and two fish.

In both of these instances, God perceives a need and determines He will meet it.
Both times, man perceives the need and despairs.

Are you in a place of despair?

Do you find yourself surrounded by overwhelming problems and unmet needs? Be encouraged! There is nothing, not a moment, of our lives that goes by unobserved by Yahweh Jireh. Unlike an uninterested bystander, the Lord not only perceives our needs, He moves on our behalf to meet them.

Nowhere is this more true than in our need for a savior. Just as God provided a ram to stand in the place of Abraham’s son, He provided Jesus to stand in ours.

Our salvation is a need we couldn’t possibly satisfy on our own;
our sin is a debt we could never repay.
Thanks be to Christ, we no longer have to.

His death ensured our forgiveness;
His righteousness became our own.

Whatever you are in need of today, bring it before Yahweh Jireh. He has met our greatest need through salvation. How much more can we trust Him with the rest?

Thanks for joining us today as we journeyed into He Week Two! Don’t miss out on the discussion below – we’d love to hear your thoughts!