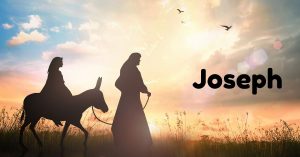 I know that pacing this floor will not solve this problem. But perhaps it will help me sort out my thoughts. My name is Joseph, and I am a descendant of the house of David. My betrothed, Mary, told me this story. She is pregnant. We have not been physically together, so the baby isn’t mine. She says the one she carries belongs to God, that God put the baby there. But how can that be?

I love her. I don’t want to shame her. So I’ve decided to divorce her quietly (Matthew 1:19). There will be enough scandal when it is discovered she is with child, I can avoid it now by doing this. I want to believe her, but it just doesn’t sound believable.

Would God do such a thing?

Even as I ask that question, I recount the story of father Abraham. His wife Sarai was barren, but then Yahweh opened up her womb and gave her a son in her old age. Even Sarai thought it to be unbelievable, and impossible, when she overheard the angel of the Lord tell Abraham it would happen. (Genesis 18:9-14) As I’ve heard when the scroll was read, the Lord says, “Is anything impossible for the Lord?” (Genesis 18:13)

Is anything impossible for Him?

I consider other stories of God showing His people what He could do. He promised to free His people, my people. (Exodus 6:1-9) Through Moses, He brought the ten plagues to Egypt so Pharaoh would let our people go. (Exodus 7:14-11:10) Then He parted the Red Sea to allow our people to escape and the Egyptian army to be swallowed up by that same sea. (Exodus 14:15-31) I also have to consider the taking of Jericho. Nothing in the Neviʾim shows that Joshua questioned Adoni when he received the battle plan for Jericho. The marching and shouting worked, though it had to seem impossible to take a fortified city that way. Yet, it was possible. And Jericho was taken. Because of Yahweh.

And what of King David, my own ancestor? A shepherd boy who felled the great giant Goliath with two stones and a sling. (1 Samuel 17) The same shepherd who was anointed king of Israel. So laughably unlikely. Yet, it happened. And I am a descendant of this great and beloved king. I still recall being reminded of the promise given to David by the Lord through the prophet Nathan, “Your house and kingdom will endure before me forever, and your throne will be established forever.” (2 Samuel 7:16)  As a young boy, I often wondered what that meant. They told me the promised Messiah would come from the line of David. But how and when? No one knows. But if Yahweh promised, surely it will be done. At least that is what our people have always believed.  But do I?

I must, because of my visitor last night. I can scarcely believe it even happened. I thought it was a dream, but was it only that?  I heard Zechariah the priest also saw an angel a few months ago. Mary said an angel came to her to deliver the news of what would happen to her. Last night the same angel of the Lord came to me. Three angel visitations? Perhaps this truly is the hand of God at work.

The angel said to me, “Joseph, son of David, don’t be afraid to take Mary as your wife, because what has been conceived in her is from the Holy Spirit. She will give birth to a son, and you are to name him Jesus, because he will save his people from their sins.”  (Matthew 1:20-21)
The Holy Spirit!
How will this baby save people from their sins? So much I do not understand! How can this be?!

All this brings to mind a promise spoken in Isaiah, “Therefore, the Lord himself will give you a sign: See, the virgin will conceive, have a son, and name him Immanuel.”  (Isaiah 7:14) Could my Mary be that virgin? Impossible!
Yet, is anything impossible for the Lord?

It is too much for me to perceive! So for now, though my head is full of doubt, I will trust. Yahweh has shown Himself capable of many things we, I, cannot understand.
Just because we don’t understand doesn’t mean He’s not able.

It does not mean He won’t do what we can’t even imagine. So, I will marry Mary instead of divorcing her. I will name this baby boy, given to us from the Holy Spirit, Jesus, as God has instructed. I will do all the Lord commands me about Him.

I may not understand, but I will trust. Why?
Because this very God has proven Himself trustworthy.
He is worthy!

Thanks for joining us today as we journeyed into Here Week One! Don’t miss out on the discussion below – we’d love to hear your thoughts!
Click the above image for today’s Digging Deeper!

Looking for other journeys from this theme?
Here’s a link to all past studies in Here!

Only in recent years has the truth of Jesus name “Immanuel – God with us” become sliced in my heart. I was raised knowing this but wow! All of a sudden one Christmas, it brought such complete joy to my heart. From the beginning of time God has desired to be “with us”. In the garden, he walk with man every evening, fellowshipping “with him”, many times through the Old Testament, God’s spirit came upon an individual and wear “with him” for a moment. But after Jesus came, now through His Spirit, he is “within us”, each is us (if… Read more »