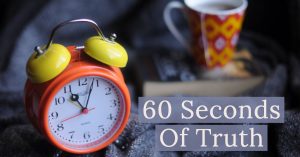 60 seconds on the clock.
Your questions to answer:
What do you believe?
Who is the Lord?
What is His role in your life?

I flip that question on myself and sometimes find myself fumbling for words to convey what my heart and mind already know to be true about my relationship with the Lord.

If so, know you aren’t alone! Countless others before us have experienced that same reality.
If that isn’t you, glory to God! How honoring to Him to be prepared to share the hope that dwells within you with clarity and truth.

As I research and write this particular study, I recognize the beloved sting of conviction and thank the Lord for both the challenge and the invitation to be intentional with my words and my faith. I know myself, and the best way for me to do exactly that is to write down what I believe, to pour over the words, and weigh them in His presence.

I am not the first person to do this, however. Centuries ago, wise individuals intentionally joined their hearts and minds to write formal statements of their beliefs, which happens to be the very definition of a creed. A few creeds have withstood the test of time having been adopted by the global Church across denominations.

One of the most widely known creeds is the Nicene Creed, aptly named as it was first written by the Council of Nicea in 325 AD. The Council convened in the midst of false teachings arising during the life of the early Church. The leaders wrote the creed collectively and a subsequent meeting in 381 resulted in a finalized version, which sometimes is called the Nicene-Constantinople Creed and not just the Nicene Creed. The Nicene Creed specifically addresses the Trinity and the role Christ plays in our salvation.

Another creed, though not as well-known as the Nicene Creed, is the Athanasian Creed. It is named for Athanasius, a man who stood against those around him who were denying the identity of the Trinity. While he may not have been the one to specifically write this creed, it was named after him as it was Athanasius who fought valiantly for the creed’s Scriptural truth. He lived around the time of the creation of the Nicene Creed as well, and it may have been written originally in Latin rather than the original Greek and therefore not as wildly accepted in the global church for that reason. The Athanasian Creed speaks to the nature of the Triune Godhead and Christ’s living as both fully God and fully man, specifically combating the false teaching of Arianism, which propagated the idea that Christ was not fully Divine.

The Apostle’s Creed rounds out a solid list of the well-known creeds. This one contains a brief outline of the Trinity and recap of key events in the life of Christ as documented by the apostles in the Gospels.

All three creeds contain the truth of who the Godhead is and are excellent starting points for creating a creed of your own. Consider beginning by writing down a few of the core beliefs of Christianity, then ask yourself what you believe about them and why. Not sure you have the time to formulate a full-blown creed immediately? Memorize one of these time-tested, Scripture-rooted creeds written centuries ago! (Once again tasting the conviction to do the same as I type this.)

Regardless of whether you write your own creed or you hold fast to one written so long ago, may the words and truth ensconced in them fill our hearts and minds, guiding us in our everyday life.

May these truths set us free!
May the words become launching pads for deeper intimacy with the Lord, greater understanding of the hope we have through salvation, and fresh opportunities to share the reason for the hope within us!
May we lovingly embrace the reality of the Trinity and rejoice in interacting with the Godhead Three-in-One. (Check here for an excellent, easy to read resource to help in understanding the Trinity!)
May our lives be forever changed because we prepared for the 60 second (okay it can be longer than 60 seconds) window in which we can share what we believe.

As I leave you to ponder what would fill your 60 seconds, words from the Athanasian Creed humble me and cause me to rejoice because we are able to interact on a daily basis with the Lord of Lords. May we remember “that we worship one God in trinity and the trinity in unity, neither blending their persons nor dividing their essence.” Amen!

60 seconds on the clock.
Are you ready?

Thanks for joining us today as we journeyed into Ignite Week Two! Don’t miss out on the discussion below – we’d love to hear your thoughts!

This is a great call to be ready to explain why you believe what you believe. Praying that my actions prepare others for the words I share, and that my words back up what I do.

This Journey was so convicting and encouraging to me as well!