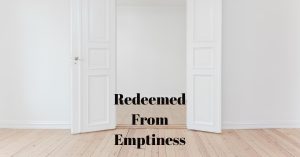 “For you know that you were redeemed (bought back)
from your empty way of life inherited from your fathers,
not with imperishable things like silver or gold,
but with the precious blood of Christ.”
1 Peter 1:18-19

And so many others throughout Scripture have been bought back
by the precious blood of Christ.

Joshua 2 tells the story of Rahab.
A prostitute.
Giving away her body for money, she was used and abused.
Hers was an empty life.
Rahab had heard of the mighty deeds of the Hebrew God called Yahweh, enough to know He was worthy of awe and respectful fear. (Joshua 2:8-11)
Enough to know that if He would provide her protection, she would turn her back on her people.
True to His Word, as the walls of Jericho collapsed around her, Rahab’s house was left untouched and her family was saved.

Rahab married a Hebrew man, was rescued from prostitution, was welcomed into the blessings of Yahweh, and grafted into the lineage of Christ.
One moment of choosing to be in exile from her people
brought about new life for Rahab.

As we come face to face with the reality of who God is,
we are free to walk confidently into the redeeming grace He offers.

Ruth was a Moabite widow who followed her mother-in-law Naomi, against cultural custom, back to Israel. She was a foreigner without food and protection of a husband.
An outcast among Jews.
If anyone felt empty, it was Ruth.

Like Rahab, she chose to be in exile, displaced from her own land to follow Naomi and her God.

Through events only God could ordain, Ruth became the protected wife of Boaz and mother to Obed, another generation in the lineage of Jesus.
Redeemed from emptiness and vulnerability,
Ruth found fullness, life, and purpose.

As we lay ourselves humbly at His feet, the Lord faithfully redeems our empty places.

In Acts 9, we meet Saul.
Well-known as murderer and persecutor of Christians, Saul made it his life mission to kill all who claimed the name of Jesus.
Death always leads to emptiness.

But Jesus interrupted Saul’s crusades in a blinding moment of awe-filled truth where Saul surrendered to radical grace.

Having been redeemed from his old way of thinking and living life, Saul-turned-Paul spent the remainder of his days proclaiming Christ, forever exiled from the life he’d once so passionately known.

Emptiness was all he had known,
but grace captured his heart, exchanging life for death.

As we accept the redemptive grace of God, we become new people.

Each of these people were exiles in one form or another.
Each heard and understood the character of God through His people.
Each found hope in the midst of their exile because of God’s faithful, trustworthy character.

Peter reminds us that we are exiles too.
Separated here on earth from the One in Heaven who crafted our hearts to beat in rhythm with His. Aliens here with broken relationships, heartache, loss, destruction, and sufferings coming in all shapes and sizes.
Exile is not forever, Sisters.
We can trust that truth because of our God’s character!

“And after you have suffered a little while,
the God of all grace,
who has called you to his eternal glory in Christ,
will himself restore, confirm, strengthen, and establish you.”
1 Peter 5:10
Jesus says He will restore us, confirm us, strengthen us, and establish us!

Restore – to repair or renovate so as to return it to its original condition.
Confirm – to establish the truth or correctness of something believed.
Strengthen – to make or become stronger.
Establish – to achieve permanent acceptance or recognition for.

As we look at those definitions we see redemption so clearly!

Through the lives of Rahab, Ruth, Paul, and so many more, we see how God
restored the broken places,
confirmed what they believed about Him to be true,
strengthened their faith,
and established them firmly in the incorruptible inheritance that was to come.

Redemption is such a beautiful thing,
but it’s only ours to claim if we accept the gift of salvation.

Salvation is a free gift from God that buys back (redeems) us from the chains of Sin and Death, adopting us as His very own daughters.

Jesus Christ, the only mediator (1 Timothy 2:5) between humanity and God, wrapped Himself in human flesh (1 Peter 1:20-21), became one of us, was sinless like none of us, and willingly laid His life down on the cross that each of us might know Him, trust His character, and be redeemed from emptiness!

“For you know that you were redeemed (bought back)
from your empty way of life inherited from your fathers,
not with imperishable things like silver or gold,
but with the precious blood of Christ.”
1 Peter 1:18-19

What’s your emptiness?
Has it been redeemed?!

Thanks for joining us today as we journeyed into Incorruptible Week Two! Don’t miss out on the discussion below – we’d love to hear your thoughts!

Looking for other journeys from this theme?
Here’s a link to all past studies in Incorruptible!