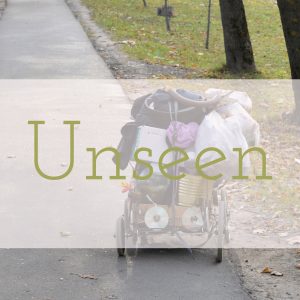 I knew my favorite spot would probably be taken as I pulled into the overflowing parking lot of my local coffee shop. I groaned inwardly, wanting just a small space of quiet to write and catch up on long-overdue projects.
A beautiful, long haired college student sat studiously in “my” spot.
Coffee orders streaming in, background music that could barely be heard, barista laughter.
Outside, the patio was full too. Two little girl twins and their mama, a couple of ladies chatting, an interview taking place, all the normal cacophony, but my perusal was stunted as I checked the back corner.

Matted hair, glazed over eyes staring into nothing, mouth moving silently, uttering words only he could hear in his head. No coffee in hand, no computer to work on or book to read, no companion for conversation. His face browned from the sun’s burning glare, a dirty band-aid sporting across his forehead. His face spoke defeat, loss, unknown, and unseen. Forgotten.

My insides shook as I heard the Lord’s whisper in my heart to see him.
“Hello, Sir.” I extended my hand. “I’m Rebecca, what’s your name?” I asked, careful to look into his eyes, to show him value and respect with every body movement I made.
“Paul”, his voice rumbled, but for a split second, his eyes streaked with light and I wondered how long it had been since someone had asked his name.
My heart broke.

“Can I buy you a coffee?”, I offered.
“Yes.” Eyes downcast, voice jumbled, “Yes, you can.”
He murmured his order through a mouth without teeth, and I leaned in closer to catch his words. I pulled up the chair next to his and asked him where he was from and how he managed to be in Kansas City. With every response he uttered, and most of my questions that went un-answered as he blankly stared ahead, pretending I didn’t see him, my heart softened more and more towards Paul.

Such a strong name, full of character.
But the man who sat before me had lived his entire life on the streets, never knowing or believing that He was loved and precious and was called to more.
I ached to tell him the whole of the gospel, but felt the Spirit hold my tongue.
This time, the gospel was spelled out with a strawberry smoothie, chocolate cake, and eyes that met his, a hand that shook his, and a voice that asked what his name was.

As I handed Paul his food, I held his hand in mine, catching his gaze once more and said,
“Paul, I know most don’t see you. Most overlook you. You probably feel alone and forgotten, but you are loved, you are known, and you are seen by the Most High God. I don’t know where your travels will take you, but I know that truth is sure.”

Paul nodded his head, like he had heard it all before, but I spoke it just the same, praying that the Spirit would pursue his heart, just as He had pursued mine.

See, Paul and I…we aren’t that different.
Paul’s homelessness and off-putting appearance are obvious.
No one looks at him, and if they do, they avert their eyes.
But my heart.
Your heart.
We are just as off-putting with matted hair, smelly body-odor, and defensive overtures on the inside where no one sees.
But Jesus sees us.
He moves in.
He buys much more than a smoothie and cake, He purchased our salvation with the cost of His own blood.
And He did it for me, for you, for Paul.
Who are we to avert our eyes from those who are destitute when we are the same?!

In Acts 3, Peter and John came upon a man much like my friend Paul. This man was lame and had been for his entire life. Note what Peter said when he encountered the beggar he had undoubtedly seen hundreds of times before at the same spot, asking for coins.

“Seeing Peter and John about to go into the temple, he asked to receive alms.
And Peter directed his gaze at him, as did John, and said,
“Look at us.”
And he fixed his attention on them.”

They looked at him. They respected him. They valued him.
Instead of ignoring him or waving him off, the two disciples who had just recently been radically transformed by the Holy Spirit dwelling inside them, saw the beggar for more.

Because they had been remade,
they could see this beggar and love him as a man of equal value and importance.
Peter and John extended the gift of Jesus because they knew firsthand of His transforming power.

Next time you see a man, woman, or child begging for food or coins,
I challenge you to see them.
But not just them, see yourself in them.
See that we are the same.
And hold out truth, just as truth was once held out for you!

Thanks for joining us today as we journeyed into Justice Week Two! Don’t miss out on the discussion below – we’d love to hear your thoughts!

Looking for other journeys from this theme?
Here’s a link to all past studies in Justice!