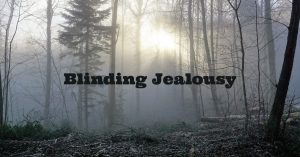 Jealousy.
We have all come face to face with that little green monster.

Jealousy has plagued the human race since the beginning of time. We can each recount stories of the ugly results that follow when people allow jealousy to fester in their hearts. Maybe you’ve even been a victim of jealousy, or perhaps hurt others with your own jealousy.

In King David’s case, he was the one bringing harm, even death, as a result of a jealousy that blinded him. 2 Samuel 11 finds the king at home in his palace instead of fighting with his army, where he begins his journey into devastating, blinding jealousy as he encountered a beautiful woman bathing on the rooftop.

He could have ended his journey here.
He could have walked away from Jealousy’s luring temptation, but he investigated who this lady was. His servant reports her name as Bathsheba wife of Uriah, one of the king’s fighting men. The red flags are in full force now, and again, the king could have divorced his jealousy.
But he chose to indulge a little more.

King David summoned her to his chambers to fulfill his lustful cravings.
Sometime after, Bathsheba sent word back to David that she was with child. Now this was a huge problem because her husband, Uriah, was in battle fighting for David, and could not have fathered the child.

Enter another chance to take ownership, but Jealousy held full sway now.
Instead of taking responsibility, King David came up with a plan to bring Uriah back from battle in attempt to convince him to sleep with his wife.
But Uriah, having integrity and honor as both a man and soldier refused. (2 Samuel 11:9-11) In desperation to cover up his sin, and with Jealousy blinding him to all else, David plotted murder. The king ordered Uriah to the battle’s frontline where the fighting was the strongest (2 Samuel 11:14-51).  Here, Uriah was killed, and David took Bathsheba as his wife.

Because of jealousy and David’s refusal to step away from its blinding lies,
David became an adulterer, liar, and murderer.

Jealousy, like all other sin, “takes you further than you planned to go, holds you longer than you intended to stay, and cost you more than you wanted to pay”. (Ravi Zaccharias)

Jealousy shows up again in Luke 15:11-32, with the Prodigal Son.
In this parable, the younger brother decided he wanted his inheritance from his father so he could leave and do whatever he wanted. The father relented, his son left and spent his money freely, but eventually, he didn’t have enough money to even eat. The erring son decided it was time to go home and, to his surprise, his father welcomed him happily, celebrating his return royally.
Meanwhile, the eldest son was furious, enraged with jealousy.
“I’ve been the good son!”
“I never left you!”
“I’ve been responsible, but you have never thrown me a party.”
The brother’s angry, self-righteous jealousy, so blinded him that he couldn’t rejoice for his brother’s safe return.

Jealousy blinds us to truth and steals our joy.

Jealousy is even the reason Lucifer was cast from Heaven, creating need for Jesus to die in our place. In Isaiah 14:13-14 the Lord says of Satan,
“You said in your heart, ‘I will ascend to heaven;
above the stars of God I will set my throne on high;
I will sit on the mount of assembly in the far reaches of the north;
I will ascend above the heights of the clouds;
I will make myself like the Most High.’”

Lucifer wanted to be worshipped and praised like God.
His jealously lost him peace with God and gained him Hell, where he will spend eternity suffering.
Sin always leads to death.
Death of relationships.
Death of joy.
Death of peace.

If jealousy is so evil, then how doesn’t it work with love?
The simple answer is: it doesn’t.
Love is neither jealous nor envious.

In my own life, I’ve wrestled with jealousy…
jealous of my friends’ relationships while I was single.
jealous of others’ talent in choir, when I wanted the solo.
jealous of another woman’s physical appearance or personality.
jealous of friends that stayed the course better than I did.

But jealousy brings death, where love brings life!
Don’t get me wrong, living with eyes wide open in love, without the blinding lies of jealousy this is impossible without the Holy Spirit.
But with Christ transforming us, we begin to exchange jealousy for true love.

Sisters, love isn’t jealous, so don’t allow it room to grow in your heart.
It’s never worth it!

Thanks for joining us today as we journeyed into Kaleidoscope Week One! Don’t miss out on the discussion below – we’d love to hear your thoughts!
Click the above image for today’s Digging Deeper!

Looking for other journeys from this theme?
Here’s a link to all past studies in Kaleidoscope!