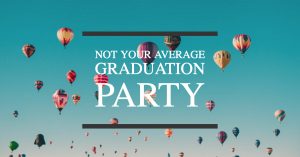 It’s the time to celebrate accomplishments, bittersweet endings, and hopeful new beginnings. Graduations represent lines in the sand. Once crossed things will never be the same: good, bad, or ugly. Sometimes the change is abrupt and sometimes it is a slow, gradual shift from what once was to what is becoming.

And not just plans….
“Plans for your well-being, not for disaster, to give you a future and a hope.”

This verse provides much encouragement.
A future.
A hope.

Jeremiah 29:11 lends itself so well to graduation season as bright futures and hope seem to be the foundation upon which post-graduation plans are built.

This verse, however, is not for the faint of heart,
nor is it a promise of prosperity.

In fact, as I have grown in the Lord and learned how to study the Word in greater depth,
I have found this verse to be an invitation,
a challenge, and promise on which to stand,
especially in some of the hardest seasons of my life.

I first learned this verse as a child, and it has been a favorite since.
I loved knowing that He had plans me.

As I grew older and encountered more challenging seasons, my love for it grew when I studied the verses following it and found the promise that I would find the Lord when I search for Him with all my heart.
Not only does He have plans and purposes for my life, He promises to let me find Him.

He is the creator of the Universe.
If He wanted to stay aloof and out of reach,
He could easily ensure that I would never draw close enough to find Him.
Instead, He promises to be found when I search for Him with all my heart.
And so, I fell more in love with the hope of His words in Jeremiah 29:11-13.

However, the strength and depth of these verses truly struck my heart when I learned the true context of those verses.
It was not when the Israelites walked out of Egypt after 400 years of captivity.
It was not when they finished wandering in the wilderness and actually entered the Promised Land.
It was not at the completion of the Temple in Jerusalem.

No, the Lord spoke these words through His prophet Jeremiah to the Israelite exiles living in Babylon, exiles who found themselves serving a foreign king due to their repeated disobedience.
Not only did the Lord speak these words to the Israelites when they were in a place they did not want to be, He spoke them at the beginning of 70 years of exile.

These words were not the noted embarking of some joyous, new adventure.

These are not prosperity gospel verses.
They note the start of the natural consequences the Israelites chose after repeatedly ignoring the Lord’s warnings. For all intent and purposes, Israel had just been put in timeout for 70 years.

Yet, even in the midst of disciplining His chosen children, the Lord shows His love.
He does not remove the consequences, but He promises to be found in the midst of them.
He promises to eventually restore the Israelites.
He promises that in, through, and from those 70 years, He would produce a future and a hope for them.
Yes, He would restore their fortunes, which is a promise He did not have to include.
Yes, they would go home, out of exile, they could rebuild their temple, they would not be destroyed.

The same Lord who both promised and fulfilled His word for Israel,
also proves just as faithful and true for us today .
He will indeed give us a future and a hope, we can be assured of it.
His timing may not be our timing, His ways not our ways,
but His faithfulness is true and His promises are sure.

These riches of His steadfast character
cannot be quantified with a price tag.
We sell the Almighty short when we equate His promises
with finances or perpetual ease.

A future and a hope found in Jesus Christ and His endless supply of faithful love and mercies. Search for Him, dear sister.
Search with all your heart.
With tears streaming, nose running, emotions flying, voices rising,
questions increasing, and even potentially, with hope fading.
You will find Him.

And even in the darkest of days, He will remind you,
“For I know the plans I have for you, plans for your well-being,
not for disaster, to give you a future and a hope.”

Thanks for joining us today as we journeyed into Misunderstood Week Two! Don’t miss out on the discussion below – we’d love to hear your thoughts!
Click the above image for today’s Digging Deeper!

Looking for other journeys from this theme?
Here’s a link to all past studies in Misunderstood!