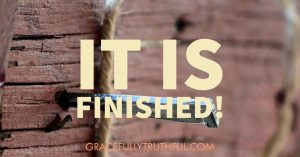 Three words sum up the greatest story of our universe, one that was birthed before the world in the longing heart of a Father. This uncreated heart overflowed with a passionate desire to share the very essence of Himself in a deep, unending, unfathomable love, and so He set time in motion and breathed life into dust.

Thousands of years later, aching for habitation, communion, and the eternity He designed for His children, the Storyteller became dust Himself and uttered three final words.

Three words, and the epic battle between good and evil that was launched in the shade of a fruit tree by the first Adam was brought to glorious victory on a blood-soaked tree by the second Adam. Fully man, this son of Eve crushed the head of Satan under his heel. Fully God, Jesus’s death rendered powerless him who had the power of death. Just as every one of us inherited the stain of Adam’s sin, so every one of us is now invited to partake in Christ’s victory over sin. Our death sentence is finished, and the hope of new life in freedom stretches before us.

Three words, and the heart-wrenching, body-shattering, eternity-altering story of obedience–even to death on a cross–reached its finale in the sweetness of life poured out for love. In willingly giving His life to complete the work the Father sent Him to do, Jesus lived out His heart of devotion to God. In choosing to die for His bride, Jesus lived out His heart of passion for us. Because of this final, greatest act of loving obedience, our quest to achieve the impossible in earning salvation of our own strength is finished,
and we are free to embrace the redeeming power of grace.

Three words, and the anguished suffering of the propitiatory sacrifice was ended. With the last stilled beat of a perfect, sinless heart bled dry, the justice of God was satisfied. Furthermore, in that moment, the way back was opened for the prodigal you and I, ending the anguish of the tender Father’s heart at the loss of His precious little ones. Our separation from God is finished, and we are free to marvel at and revel in the depths of a love that would compel such sacrifice.

Three words that mean victory, obedience fulfilled, and the ultimate sacrifice of love for all who walk this earth; now let’s shift our focus and take a moment to get personal. In my life, these three words meant an end to my quest to reach “enough.” As I shared in my faith story, my perfectionism left me plagued with the fear that I wasn’t good ENOUGH, holy ENOUGH, disciplined ENOUGH, simply ENOUGH for God to love me, to be proud of me, to feel His victorious obedience was worth the sacrifice to offer eternity with me.

Until the truth of these words resonated within my spirit: my quest to be ENOUGH was FINISHED on the cross, because it was never mine at all. HE is ENOUGH. HE is perfect, holy, disciplined, victorious, and obedient. And He was willing to make the greatest, most passionate sacrifice for me, because He couldn’t possibly love me more. I am His, and that is ENOUGH. The rest was up to Him, and it is finished.

And so, sweet friend, it’s your turn: what do these three words mean for YOUR journey? What chapter, what struggle, what endless, pointless striving in your story needs to be resolved with the inscription “IT IS FINISHED”?

Let’s believe the work of the cross is for all of us and for each of us, and celebrate His resurrection with the joy, hope, and freedom of embracing the truth of three words:
It Is Finished!

Thanks for joining us today as we journeyed into Passionate Week Three! Don’t miss out on the discussion below – we’d love to hear your thoughts!

Looking for other journeys from this theme?
Here’s a link to all past studies in Passionate!