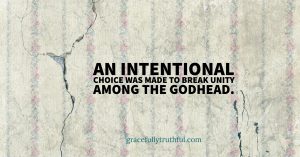 I’ve known the loss of our unborn baby. Ached to touch fingers I never would. Wept for a smile I would never see. Saw in my mind a little boy whose features I would only ever dream of. I carried him inside for a short while, his heart beating strong and steady, his body growing and then his heart beat for the last time and his short life was over. He was with me and then he wasn’t. I carried him safely, and then his body was gone from mine, leaving me empty in a way I never had been before.
I know that one day, I will see all that God had planned for my little boy. I will see his face. And I will be astounded by God’s majesty through it all. But for now, I wait. Sometimes weeping, sometimes smiling for the joy of that future hope, but always holding that place in my heart carved out for Elijah James.

My God knows what it’s like to lose a son.
Perhaps you too know the grievous hallways of loss.
But the depths of His pain are infinitely greater than my own.
The scale of His loss infinitely higher.

The relationship I have with my other children, the one I have with my husband, the ones I cherish with my friends are only darkened mirrors reflecting the depth and intimacy of the relationship and unity among the persons of the godhead as Father, Son, and Holy Spirit. As humans, we simply cannot fathom the sheer delight of community, the intricate intimacies that are shared, and the wholesome unity that exists between the persons of the Trinity, our 3-in-1 God, but we do know that it is perfect.

But a choice was made.
An intentional one.
To break unity among the godhead.

The impossible was planned to become possible.
The agony would be unlike anything we are capable of knowing.
The rendering of perfection would literally shake the heavens and the earth.
Because unity, because community, because relationships are what the Creator longs for with His created.
Intimacy.
Fellowship.
Perfection.
Bliss.

But that intimacy wasn’t possible,
that glorious relationship between the Master and His Beloved.

Sin marked each of His creations by their own prideful, arrogant choices.
And a wholly righteous God can have no part of sin, cannot tolerate even a drop. So separation existed, from the first sin until this moment. Every wicked thought, every murderous action, every lie, every evil deed, word, and motive bringing eternal separation, a breaking of that divinely desired intimacy.

There was only one hope.
A redemption.
The Perfect would have to take the place of the imperfect.
The Holy accepting the consequence of evil in our place.
Your sin and mine. Our collective shame.
The innocent One would bear the charge of guilty.
Gentleness dying the death of the gossiper.
Kindness carrying the weight of Hateful’s wicked schemes.

The lies you’ve told, the temptations you’ve given into, the times you’ve cheated, the rudeness, the self-seeking, the bitterness, the murderer, the thief, the abuser, the manipulator, the rapist, the drunk, the addicted one, the lustful one, the adulterer, the angry one.
All the consequence.
Every sin.
Jesus bore it all in His blameless body.
For. Us.
The weight of our rebellion pressing down on Him.
The shame laid on Him.
The hell of separation digging a chasm between Himself and the Father as He drank the cup of God’s wrath….intended for us. Rightly judged to be our own.

And in that moment, as the Son hung naked, cloaked only in ugly disgrace,
The Father Turned Away.
He could not look at His only Son, because all He could see was our sin.

“My God! My God! Why have You forsaken me?”
Jesus cried out in deepest agony.
It wasn’t for the pain of impending death that Jesus yelled from the cross;
it was for the torture of disownment and broken unity.

Why was this sacrifice enough?
Just one man pitted against the world’s sin.

Yes, one perfect, flawless man, who was also God.
A righteous and holy and blameless God who took on sin,
carrying its punishment in His body,
dying its death,
but rising to defeat it!

Death could not kill the author of Life.

And so, for the joy set before Him, of extending the offer of righteousness to us, the godhead chose to forsake the Son, to cut him off, to lose Him entirely, to give Him over to Death, in order to make a way for us to never be lost.

Oh, but Beloved, that choice is ours.
The whole problem of sin separating us from God exists because He graciously allowed us the freedom to choose to love Him….or not.
He will not force His love upon us.
And without accepting His sacrifice, we are still utterly lost in our sin, destined for eternal separation.

Let the Son’s anguished cry be the balm that soothes your own agony.
Choose to never be the lost, abandoned daughter, curled up in Death’s grip.
Come away to Life and the Fullness of His eternal relationship with us!

Thanks for joining us today as we journeyed into Passionate Week Two! Don’t miss out on the discussion below – we’d love to hear your thoughts!

Looking for other journeys from this theme?
Here’s a link to all past studies in Passionate!