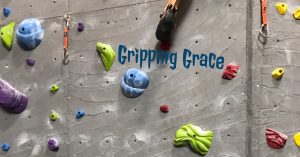 Suffering doesn’t come as a surprise to anyone.
What isn’t common, is the mindset regarding suffering that is available to all who claim Christ as Lord and Savior.

No matter what we face,
how overwhelmed our circumstances are,
or how tempted we are to believe all is lost,
grace is still ours.

Along with boundless grace comes, solid hope, fullness of life, and strength only God can provide.
On the good days when we feel amazing, and on the rough days when lies become difficult to decipher from truth.
All of these riches, and so much more are freely available, it’s up to us to be alert enough in the chaotic swamp of our everyday lives to choose truth over the lies that seem to easy to believe.

1 Peter 4 is the right place to land for drinking in truth and reveling in grace.
In a world where it’s easy to lose sight of the eternal, Peter invites us to grip grace so tightly it becomes our everything.

Dig in, Sisters, grip grace with me.
I know I need it.

1) Be a scribe and copy the precious words of Scripture down word for word. Make space in your journal to write down all of 1 Peter 4 today. As you copy, lookup a cross reference or two as you come to them (they are the small letters next to certain words in your study Bible or online at www.biblia.com). As you write, think of the incredible gift it is to be invited into God’s presence through His word!

2) Choose one of these options to walk into more with Jesus as you make the intentional choice to “Grip Grace!”
a) Pitch in to do something extra at church. Whether it’s helping with cleanup, opening doors, trimming weeds, or offering to help in a child’s classroom, step up to loving deeper by serving in a new way.
b) October is Pastor Appreciation Month and a note of genuine kindness goes a long ways in showing love and giving encouragement. Consider sending your pastor an email or card!
c) Check out some local ministries in your area and make plans to serve with them for an afternoon. Maybe it’s organizing school donations, serving soup, or stuffing backpacks for kids. Even better, get some friends to join you!
d) Prayer walking is a simple way to begin shifting the eyes of your heart to truly see others. Walk around your neighborhood, some city streets, the aisles of your grocery store, or intentionally sit at a local coffee shop and pray, pray, pray. Pray for the people around you, pray for hearts to turn towards Jesus, pray for your own heart to be ready to share the full gospel if given the chance. Don’t worry about seeing results, that’s God’s job!
e) Strike up a conversation with a random stranger. It may move to spiritual topics, it may not, but showing love to those outside our immediate circles always begins with a simple conversation. “What have you been doing today?” “Do you live nearby?” “Where do you go to church?” “What are your favorite local restaurants?” “I love your top! Where did you get it?” These open-ended questions work well!

3) Share the exciting, bold ways you are Gripping Grace today with the rest of the GT Community! Our Facebook community page is always open! Or snap a photo and tag us on Instagram @gracefully_truthful

Therefore, since Christ suffered in the flesh, arm yourselves also with the same understanding —because the one who suffers in the flesh is finished with sin – 2 in order to live the remaining time in the flesh no longer for human desires, but for God’s will. 3 For there has already been enough time spent in doing what the Gentiles choose to do: carrying on in unrestrained behavior, evil desires, drunkenness, orgies, carousing, and lawless idolatry. 4 They are surprised that you don’t join them in the same flood of wild living—and they slander you. 5 They will give an account to the one who stands ready to judge the living and the dead.6 For this reason the gospel was also preached to those who are now dead, so that, although they might be judged in the flesh according to human standards, they might live in the spirit according to God’s standards.

7 The end of all things is near; therefore, be alert and sober-minded for prayer. 8 Above all, maintain constant love for one another, since love covers a multitude of sins. 9 Be hospitable to one another without complaining. 10 Just as each one has received a gift, use it to serve others, as good stewards of the varied grace of God. 11 If anyone speaks, let it be as one who speaks God’s words; if anyone serves, let it be from the strength God provides, so that God may be glorified through Jesus Christ in everything. To him be the glory and the power forever and ever. Amen.

12 Dear friends, don’t be surprised when the fiery ordeal comes among you to test you as if something unusual were happening to you. 13 Instead, rejoice as you share in the sufferings of Christ, so that you may also rejoice with great joy when his glory is revealed. 14 If you are ridiculed for the name of Christ, you are blessed, because the Spirit of glory and of God rests on you. 15 Let none of you suffer as a murderer, a thief, an evildoer, or a meddler. 16 But if anyone suffers as a Christian, let him not be ashamed but let him glorify God in having that name. 17 For the time has come for judgment to begin with God’s household, and if it begins with us, what will the outcome be for those who disobey the gospel of God?
18 And if a righteous person is saved with difficulty,
what will become of the ungodly and the sinner?
19 So then, let those who suffer according to God’s will entrust themselves to a faithful Creator while doing what is good.

Thanks for joining us today as we journeyed into Pause 2 Week Two!
Don’t miss out on the discussion below – we’d love to hear your thoughts!

Looking for other journeys from this theme? Here’s a link to all past studies
in Pause 2!