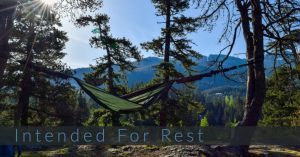 Rest.
We all need it, but most of us push back from it, not wanting to be found lazy, weak, or ineffective. We stay awake until the wee hours working, press ourselves to exhaustion during the day, or move from one activity to the next without a breath.
Yet, we were designed for resting.

As often is the case, the physical realm mirrors the spiritual in order to accentuate it. Just as our physical bodies were made to literally live off of rest, so were our souls. This is the emphasis of chapter three in Hebrews. The only safe haven of rest for our souls is found in Christ Jesus, the author of our hearts.

Grab your Bible, a journal and pen,
and open your heart to bask in the presence of the Almighty!

1) Pull out your Bible and read Hebrews 3 fully through 3 times.

2) Each time, write down everything that pops out at you, makes you curious, or wonder “why?”. When you’re finished, go back through and you’ll be amazed at the new things the Spirit is leading you into knowing about Him!

3) Pay special attention to the kind of rest we are made for. Who is able to ensure we will be given the inheritance of rest? What kind of rest is the author wanting us to make sure we enter? How do we enter it? What keeps us from this specific rest?

Therefore, holy brothers and sisters, who share in a heavenly calling, consider Jesus, the apostle and high priest of our confession. 2 He was faithful to the one who appointed him, just as Moses was in all God’s household. 3 For Jesus is considered worthy of more glory than Moses, just as the builder has more honor than the house. 4 Now every house is built by someone, but the one who built everything is God. 5 Moses was faithful as a servant in all God’s household, as a testimony to what would be said in the future. 6 But Christ was faithful as a Son over his household. And we are that household if we hold on to our confidence and the hope in which we boast.

7 Therefore, as the Holy Spirit says:
Today, if you hear his voice,
8 do not harden your hearts as in the rebellion,
on the day of testing in the wilderness,
9 where your fathers tested me, tried me,
and saw my works 10 for forty years.
Therefore I was provoked to anger with that generation
and said, “They always go astray in their hearts,
and they have not known my ways.”
11 So I swore in my anger,
“They will not enter my rest.”

12 Watch out, brothers and sisters, so that there won’t be in any of you an evil, unbelieving heart that turns away from the living God. 13 But encourage each other daily, while it is still called today, so that none of you is hardened by sin’s deception. 14 For we have become participants in Christ if we hold firmly until the end the reality that we had at the start. 15 As it is said:
Today, if you hear his voice,
do not harden your hearts as in the rebellion.

16 For who heard and rebelled? Wasn’t it all who came out of Egypt under Moses? 17 With whom was God angry for forty years? Wasn’t it with those who sinned, whose bodies fell in the wilderness? 18 And to whom did he swear that they would not enter his rest, if not to those who disobeyed? 19 So we see that they were unable to enter because of unbelief.

How Does “Pause” Work?
1. Each day, Monday through Friday, for 2 weeks, we will provide you with a simple challenge. Each challenge is designed for you to engage with the Almighty in a deeper way and perhaps in a new way than you have been recently.

Thanks for joining us today as we journeyed into Pause 3 Week One!
Don’t miss out on the discussion below – we’d love to hear your thoughts!