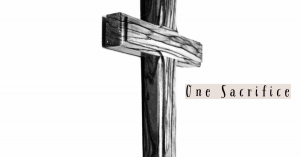 Have you ever felt overwhelmed by your own screw-ups?
Raising both of my hands over here!

Words that just keep coming out like swords that cut, no matter how much you wish they didn’t.
Anger that boils over when you get in those specific scenarios, despite how much you decide you won’t get mad this time.
Or even overspending or overeating or over-parenting, even though you know it’s a weakness of yours.

Jesus comes to bring complete forgiveness of sin once and for all.

Shame has no place.
The times we fail to live the life of love we want to are opportunities to return closer to the Father, and learn from Him again, not be ashamed of lifting our face to His.

Slow down today and sink into the fullness of this sweet, freeing truth:
One sacrifice, all sin forgiven, eternal Hope offered!

1) Be a scribe and copy the precious words of Scripture down word for word. Make space in your journal to write down Hebrews 10:4-10 after you read the full passage of today’s reading in Hebrews 10:1-18. As you copy, lookup a cross reference or two as you come to them (they are the small letters next to certain words in your study Bible or online at www.biblia.com). As you write, think of the incredible gift it is to be invited into God’s presence through His word!

2) Choose one of these options to answer the invitation of going deeper into biblical community!
a) Take a photo of your journal time this week and share it, or share a quote from it.
b) Do a Facebook Live on the GT Community group and share how God has been working in you.
c) Leave a comment here about it.
d) Share something God has been showing you in a comment at the GT Community Group
e) Plan a coffee or lunch date with a friend and share what you’ve been learning and soaking in as you have hit Pause.
f) Write a note of encouragement to a sister who has been through the nitty-gritty of real life with you. Let her know how deeply she has impacted your walk with Christ.
g) For some of us, having a “2am friend” to build biblical community with is a new concept. If that’s you, this is an exciting, fresh place to be! Connect with our Facebook Community, send us an email, reach out to your local church body, seek out a small group and plug in!

Since the law has only a shadow of the good things to come, and not the reality itself of those things, it can never perfect the worshipers by the same sacrifices they continually offer year after year. 2 Otherwise, wouldn’t they have stopped being offered, since the worshipers, purified once and for all, would no longer have any consciousness of sins? 3 But in the sacrifices there is a reminder of sins year after year.

4 For it is impossible for the blood of bulls and goats to take away sins.
5 Therefore, as he was coming into the world, he said:
You did not desire sacrifice and offering,
but you prepared a body for me.
6 You did not delight
in whole burnt offerings and sin offerings.
7 Then I said, “See—
it is written about me
in the scroll—
I have come to do your will, O God.”

8 After he says above, You did not desire or delight in sacrifices and offerings, whole burnt offerings and sin offerings (which are offered according to the law), 9 he then says, See, I have come to do your will. He takes away the first to establish the second. 10 By this will, we have been sanctified through the offering of the body of Jesus Christ once for all time.

11 Every priest stands day after day ministering and offering the same sacrifices time after time, which can never take away sins. 12 But this man, after offering one sacrifice for sins forever, sat down at the right hand of God. 13 He is now waiting until his enemies are made his footstool. 14 For by one offering he has perfected forever those who are sanctified. 15 The Holy Spirit also testifies to us about this. For after he says:
16 This is the covenant I will make with them
after those days,
the Lord says,
I will put my laws on their hearts
and write them on their minds,
17 and I will never again remember
their sins and their lawless acts.
18 Now where there is forgiveness of these, there is no longer an offering for sin.