“Thus says the Lord of hosts:
These people say the time has not yet come to rebuild the house of the Lord.” 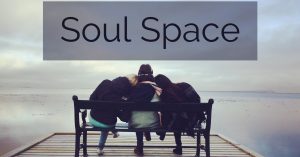 Then the word of the Lord came by the hand of Haggai the prophet,
“Is it a time for you yourselves to dwell in your paneled houses, while this house lies in ruins?

There’s always something else, isn’t there?
Another load of laundry. Another stack of dishes. Another paper to grade, shoe to tie, diaper to change, friend to check in on, budget to balance, problem to solve, lawn to mow, repairs to make. Always.
And that’s exactly the Lord’s point through the message of Haggai’s prophecy.

We can find something “more important” than spending time with Jesus, that’s easy. We can do it at any moment of any day. The time ear-marked “Quiet Time With God” will never just fall in our lap.
But we can shift our gaze.
We can find a better rhythm.
We can choose space for our souls to be nourished.

Together, let’s “consider our ways” today. Let’s stop “building our paneled houses” and reposition the busy of our hands to remember that He, the Yahweh of Hosts, is with us.
And *that* is enough!

1) The discipline of copying down Scripture holds much treasure! Make space in your journal to write down Haggai 1. As you copy, lookup a cross reference or two as you come to them (they are the small letters next to certain words in your study Bible or online at www.biblia.com).

2) Choose one of these options to answer the invitation of going deeper into biblical community!
a) Take a photo of your journal time this week and share it, or share a quote from it.
b) Do a Facebook Live on the GT Community group and share how God has been working in you.
c) Leave a comment here about it.
d) Share something God has been showing you in a comment at the GT Community Group
e) Plan a coffee or lunch date with a friend and share what you’ve been learning and soaking in as you have hit Pause.
f) Write a note of encouragement to a sister who has been through the nitty-gritty of real life with you. Let her know how deeply she has impacted your walk with Christ.
g) For some of us, having a “2am friend” to build biblical community with is a new concept. If that’s you, this is an exciting, fresh place to be! Connect with our Facebook Community, send us an email, reach out to your local church body, seek out a small group and plug in!

7 “Thus says the Lord of hosts: Consider your ways. 8 Go up to the hills and bring wood and build the house, that I may take pleasure in it and that I may be glorified, says the Lord. 9 You looked for much, and behold, it came to little. And when you brought it home, I blew it away. Why? declares the Lord of hosts. Because of my house that lies in ruins, while each of you busies himself with his own house.10 Therefore the heavens above you have withheld the dew, and the earth has withheld its produce. 11 And I have called for a drought on the land and the hills, on the grain, the new wine, the oil, on what the ground brings forth, on man and beast, and on all their labors.”

12 Then Zerubbabel the son of Shealtiel, and Joshua the son of Jehozadak, the high priest, with all the remnant of the people, obeyed the voice of the Lord their God, and the words of Haggai the prophet, as the Lord their God had sent him. And the people feared the Lord. 13 Then Haggai, the messenger of the Lord, spoke to the people with the Lord‘s message, “I am with you, declares the Lord.” 14 And the Lord stirred up the spirit of Zerubbabel the son of Shealtiel, governor of Judah, and the spirit of Joshua the son of Jehozadak, the high priest, and the spirit of all the remnant of the people. And they came and worked on the house of the Lord of hosts, their God, 15 on the twenty-fourth day of the month, in the sixth month, in the second year of Darius the king.

10 On the twenty-fourth day of the ninth month, in the second year of Darius, the word of the Lord came by Haggai the prophet, 11 “Thus says the Lord of hosts: Ask the priests about the law: 12 ‘If someone carries holy meat in the fold of his garment and touches with his fold bread or stew or wine or oil or any kind of food, does it become holy?’” The priests answered and said, “No.” 13 Then Haggai said, “If someone who is unclean by contact with a dead body touches any of these, does it become unclean?” The priests answered and said, “It does become unclean.” 14 Then Haggai answered and said, “So is it with this people, and with this nation before me, declares the Lord, and so with every work of their hands. And what they offer there is unclean. 15 Now then, consider from this day onward.Before stone was placed upon stone in the temple of the Lord, 16 how did you fare? When one came to a heap of twenty measures, there were but ten. When one came to the wine vat to draw fifty measures, there were but twenty. 17 I struck you and all the products of your toil with blight and with mildew and with hail, yet you did not turn to me, declares the Lord. 18 Consider from this day onward, from the twenty-fourth day of the ninth month. Since the day that the foundation of the Lord‘s temple was laid, consider: 19 Is the seed yet in the barn? Indeed, the vine, the fig tree, the pomegranate, and the olive tree have yielded nothing. But from this day on I will bless you.”

20 The word of the Lord came a second time to Haggai on the twenty-fourth day of the month, 21 “Speak to Zerubbabel, governor of Judah, saying, I am about to shake the heavens and the earth, 22 and to overthrow the throne of kingdoms. I am about to destroy the strength of the kingdoms of the nations, and overthrow the chariots and their riders. And the horses and their riders shall go down, every one by the sword of his brother. 23 On that day, declares the Lord of hosts, I will take you, O Zerubbabel my servant, the son of Shealtiel, declares the Lord, and make you like a signet ring, for I have chosen you, declares the Lord of hosts.”

How Does “Pause” Work?
1. Each day, Monday through Friday, for 3 weeks, we will provide you with an invitation to get away with the Savior. Each one is designed for you to engage with the Almighty in a deeper way and perhaps in a new way than you have been recently.

Thanks for joining us today as we journeyed into Pause Week Three!
Don’t miss out on the discussion below – we’d love to hear your thoughts!

Looking for other journeys from this theme? Here’s a link to all past studies
in Pause!