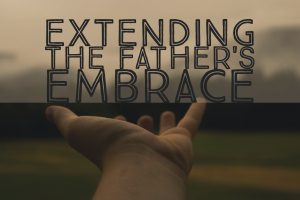 My eyes closed as I let the song fall over me, and before I could stop myself, my arms were spread and I could practically see Jesus before me. My heart was soaring and I pictured myself running to the arms of Jesus, closer, closer…
And there He was before me.
He embraced me, and held me as I crumbled in His arms.
“I am so sorry. Oh Jesus, I am so sorry.”
I could feel Him whispering to me, “I love you, my daughter. I love you so much.”

I opened my eyes as the song ended and looked around the white chapel filled with other students worshiping our King. I didn’t know their stories, and they didn’t know mine, but for some reason,
we all needed to be reminded that Jesus was waiting for us with His arms wide open.

Every time I sing that song, I picture myself running into the arms of Jesus.
Sometimes I’ve crumbled in His arms, as I’ve been embraced by the only One who knows every intimate detail of my heart.
Sometimes I have laughed as I’ve felt Him loving me as only a Daddy can.
Sometimes I have basked in His presence or allowed His embrace to heal my brokenness.
But every time, as I’ve run into His arms, I knew He was always running to me.

We’ve deeply studied the parable of the Prodigal Son, told by the same loving God who has held me every time I needed Him. It’s the story of a son who blows his inheritance in the Biblical version of Las Vegas and when he is broke, starving, and homeless, he finally goes home,
a mess of a man who is wrecked and lost.
He had drunk the richest of wines and lived in deepest of poverty, but when he had absolutely nothing, he went home.

As he walked towards his home, there was his father. His daddy.
The man who had prayed for him, worried about him, and lost countless nights of sleep over him. This daddy wasn’t just standing at the gate waiting for an apology.
No, he had already fully forgiven his son,
which allowed him the freedom to run when he saw his son in the distance.
He ran as fast as he could, with arms wide open.
In that moment of welcome, wounds began to heal.
When they met, there was no awkward pause; there was no judgment.
There was brokenness and healing.
Deep love.
Gut-wrenching tears.
Pure joy.
There was an embrace that both had dreamed of and longed for many times over.

And though forgiveness had already been given, the son hadn’t received it yet.
So, in a humble state, the broken son asked his father to allow him to be a servant.
But the father proved his forgiveness with gifts and celebrations.

Forgiveness offered, but yet unrecognized.
Sound familiar?
Doesn’t that embrace of total forgiveness sound freeing? Yet, perhaps impossible?
“Oh, but you don’t know what I’ve done….where I’ve been…all the shame.”
Forgiven.
Embraced.
Are you ready to receive what He stands open to give?

I think of my daughters, though still small, they already make mistakes. Mistakes I know will multiply as my girls get older.
But I will never stop loving them.
Ever.
Forgiveness will always be offered.

I can love my daughters unconditionally because I have been forgiven and loved by the Father God. Because of His lavish love poured over me, I’m empowered to extend His embrace of forgiveness to others.

It is so easy to say, “I can forgive people who have hurt me”, but it is something completely different to do it.
I know.
As I write, there are a handful of people I am picturing whom I need to forgive.
I don’t want to “preach” something I don’t “practice”. I feel that the Father wants me to share that
I am working on forgiveness, just as many of you are.

My Papa passed away recently, and as my uncle spoke at his funeral, in the humblest of settings, with tears streaming down his face, I watched my dear uncle look up and ask a man for his forgiveness. He was in the middle of sharing what a forgiving man my Papa was, and he couldn’t even continue without being convicted to ask forgiveness.

I might share with Him that it is really hard to forgive.
I might let Him hold me as I cry because of the pain.
But I’m running to the arms spread wide because of His unconditional love and I’m receiving His grace
as He teaches me to extend His embrace to others.

Thanks for joining us today as we journeyed into Prodigal Week Three! Don’t miss out on the discussion below – we’d love to hear your thoughts!
Click the above image for today’s Digging Deeper!

Looking for other journeys from this theme? Here’s a link to all past studies in Prodigal!