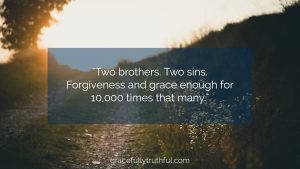 I fidgeted nervously in the pew, shifting from one position to another. I glanced toward the platform and caught the gaze of an elderly man with a friendly smile. He lifted a hand in acknowledgement and began to make his way toward me. I quickly averted my eyes and began to rifle through my purse, searching for an imaginary object. I held my breath as he slowed beside me, then expelled it in relief as he abandoned his effort and continued up the aisle. My husband returned and sat down beside me as a different man, dressed in jeans and a sport coat, approached the podium. I correctly pegged him as the pastor. His appearance was unassuming and his face was kind. As he began to speak, my eyes filled suddenly with tears. Many years of doing things “my way” had led to this moment and the relief that washed over me was almost tangible. Although I had never been inside the building prior to that morning…there was no mistaking that I was Home.

As I recall the events of that morning (and my choices in life that led up to it), I have to wonder if another storied son felt something similar at his homecoming.

The Prodigal Son.
Forsaking his home, he struck out on his own. He was determined to live his own life far away from the reaches of his father. He lived recklessly and shamelessly, quickly spending every last dime. He lost everything. His money, his possessions, and even his home. Broken and humiliated, he found himself at the very bottom of a pit he had created. Recognizing his helplessness, he finally let go of his pride and returned to his father.

And his father gave him grace and forgiveness. Joyfully.

But what about the other brother?
The Loyal Son. He watched his brother callously hurt their father by abandoning their way of life. Instead of behaving irresponsibly, the other son chose to stay. He worked hard, helping his father care for their land, their animals and their family. He was respectful. He was present. He did not bring shame to their family name. He followed all the rules and upheld the law of the land.
But his heart posture was full of pride.
Legalism crept in and took root. He never saw it coming.

When he saw their father celebrate the return of his brother, he came out with fists swinging.

What about me?
Haven’t I done enough to warrant this kind of treatment?
I never left you!

I would be lying if I claimed my heart has never echoed his sentiments. Do his words bring your own experiences to mind?

Two brothers. Two sins.
Forgiveness and grace enough for 10,000 times that many.
But only one repentant heart.

If we’re honest with ourselves, we can all relate to one of the two brothers. Maybe you relate because at one point, you rejected God’s ways in pursuit of your own way…
only to find yourself lonely and lost, aching for home.
Maybe you have gone above and beyond, serving others in every capacity possible…
only to find yourself weary and disillusioned, reliant on your actions to justify you.
Or maybe, like me, you relate to both.

To this day, I couldn’t tell you what the message was about that morning. I can’t tell you what songs were sung during worship, or even what prayers were prayed. I couldn’t hear much of anything past the whispers of forgiveness and grace that flooded like a stream, cascading over my heart and mind.

All of this and more await us when we turn to Him with repentant hearts.  He yearns to welcome us ALL, but He will not force His affections on us. He is waiting to speak life, truth, forgiveness and grace into and over every one of us…to quiet us with His love. We have only to humble ourselves and turn to Him.

Father, thank you for pursuing us, no matter what. Thank You for never giving up on us. Help me to recognize when my heart posture resembles anything but humility. Show me how to be loyal without taking up an attitude of legalism. Help me to return and abide in You, always.

Thanks for joining us today as we journeyed into Prodigal Week One! Don’t miss out on the discussion below – we’d love to hear your thoughts!

Looking for other journeys from this theme? Here’s a link to all past studies in Prodigal!