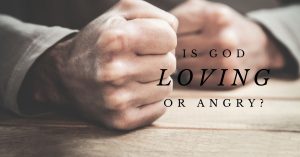 Why is God angry in the Old Testament,
but loving in the New Testament?

It’s a question people often have as they study the Bible, and an understandable one. When we read of God flooding the whole earth or destroying entire cities in the Old Testament, His wrath can be hard to equate with Jesus’ compassion toward prostitutes and sinners as He ate with them, spent time with them, and told them of God’s grace in the New Testament. While the Old Testament has much to say about judgement, the New Testament appears to focus more on forgiveness, and it can be a challenge to reconcile the two.

How can we make sense of it all?
First, the Bible clearly states God is always the same;
He “does not change like shifting shadows” (James 1:17).

The God of the Old Testament is the same God in the New Testament.
To understand God’s character, it’s vital we consider the Bible as a whole,
rather than focusing on isolated incidents.

While God does show anger in the Old Testament, He is also described eleven times as slow to anger, and on many occasions, we see Him showing mercy while continuing to love and care for His people, despite their continued unfaithfulness.

For example, Psalm 103 is an eloquent expression of David’s gratitude for God’s gracious forgiveness and compassion.

God does express anger at times, but this serves to highlight the severity of sin and the destruction it brings, while pointing to our need for a Saviour. The consequences of sin can be harsh, but God’s ultimate desire is not to punish, but to save.

The Old Testament is filled with promises and prophecies pointing ahead to a solution to the problem of sin, a solution God Himself would provide because of His love.
Again and again, He reminds His people the Saviour will come.

As we move into the New Testament, and Jesus is born as the fulfilment of God’s promises, the focus shifts more toward God’s compassion because the fulfillment has come! Scripture emphasizes the reason for Jesus’ coming and His death, was to deal with sin.
If we trust in Him, we no longer need to fear God’s anger against us:
“God proves His own love for us
in that while we were still sinners,
Christ died for us.
How much more then,
since we have now been declared righteous by His blood,
will we be saved through Him from wrath?” (Romans 5:8-9)

However, God’s holy anger is present in the New Testament as well. Paul describes at length God’s wrath against those who continue in sin and suppress the truth about God. (Romans 1:18-32)

We read of Jesus turning over tables in the Temple, driving out merchants and money changers in rage because His Father’s house, a place of prayer, was being treated as a marketplace.

Anger and love are both present in God’s character throughout both Old and New Testaments.

This tension can be uncomfortable. Anger is often seen as unacceptable because of the destructive effects of anger when it’s out of control, but God’s anger is different from our (often sinful) human anger, and is actually an important, and good, part of who He is.

While our anger does not accomplish God’s purposes, His righteous anger is intentionally focused against destructive sin. (James 1:20) This was brought home to me as I worked with a group of children, sharing the story of Jesus in the Temple. After hearing the story, they were instructed to transform it into a drama. At first, their presentation brought the story to life very well, but then one child decided to alter the ending.

As “Jesus” shouted and expressed His righteous anger, another boy went over and put an arm round “Jesus.” “It’s okay,” he said. “Calm down. Come outside and sit down, and we’ll talk about it.”

In one way, it was a lovely, compassionate response, but it was also missing the point.
In some situations, the holy response is anger.
We, too, can be tempted to edit out God’s anger and focus on His love, but the truth is, since “God is love” (1 John 4:16), His anger is actually an expression of His love.

Jesus’ passion for His Father’s house was the driving force behind His rage at its misuse. God’s love for people is manifested in His anger when He sees them being mistreated or abused. If He failed to be angry over these things, then He would fail to be wholly loving.

Surely, it’s a comfort to us, in the face of injustice or ill treatment, to know God
cares.
To know His anger on behalf of the innocent surpasses our own.
To know there are consequences for those who refuse to repent of their sin.

In Graham Kendrick’s song, “Come and see,“ he describes the cross as the place “where wrath and mercy meet.” Maybe the cross is where we most clearly see God’s anger and His love intertwined. Even as His anger against sin is poured out, His grace in sending Jesus to bear it in our place assures us of His perfect love.

Thanks for joining us today as we journeyed into Questions Week Three! Don’t miss out on the discussion below – we’d love to hear your thoughts!

Looking for other journeys from this theme?
Here’s a link to all past studies in Questions!

That story of the children’s reenactment and how we automatically assume that even righteous anger is a bad thing is so prevalent in our world today. Yet, when we are brought face-to-face with unbearable sin, we want God to be angry and to swoop in and act for the innocent. I find that Psalm 18 paints this picture really clearly for me.

Yes, I love the way Psalm 18 describes God swooping in and taking action!

Very well written, Lesley. This subject is much understood. Thanks for bringing truth here. We tend to forget that Jesus is God.

Great post! He is the same, yesterday, today, and forever! So comforting to know this with confidence!

Thanks for linking up at InstaEncouragements!

Thanks, Patsy! Yes, knowing that God is unchanging is very encouraging!

Yes, and while it’s easy for us to veer too much towards one or the other, God always gets the balance exactly right!

People like to simplify God and say he was angry in the OT and Loving in the NT. But when I sat down and read the bible, the story in chronological order, I was struck by how loving and kind God was in the OT. And how his mercy was above and beyond. When I read some of the stories, I thought to myself, I wouldn’t have put up with these shenanigans for so long. I kept seeing him as being more lenient than most of us would have been.

So true! God’s patience and mercy go way beyond ours!

Thank you for such a clear explanation–I’ve been reading through the minor prophets lately and noticed the theme of both anger, compassion, and mercy for an unruly people.

Thanks, Anita! Yes, I think often the prophets are known for their declarations of God’s judgement but his mercy and compassion really come through too!

Good explanation Lesley. Love that at the cross anger and mercy meet. X

I’m so glad you brought out that compassion and mercy are in the OT and righteous judgment is in the NT. The Bible is a unit, but we tend to compartmentalize it. And I think we can understand God’s anger toward sin if we imagine how we’d feel if someone was going to harm or lead astray our children. Our mama-bear protection would rightfully rise up to protect and defend them. We can go too far or have the wrong perspective, but God is perfectly balanced.

Thanks, Barbara! Yes, that is a helpful way to appreciate how God’s anger is tied in with his love.

Is God Loving Or Angry? – Life in the Spacious Place

[…] I’m over at Gracefully Truthful, exploring one of those difficult […]

“Jesus’ passion for His Father’s house was the driving force behind His rage at its misuse. God’s love for people is manifested in His anger when He sees them being mistreated or abused. If He failed to be angry over these things, then He would fail to be wholly loving.“

Yes! This is exactly right. Your comment that “His anger is an expression of His love,” because He is love, is on point. Thank you for sharing this so succinctly.

Thanks, Merry! It can be hard to hold the two together – glad this was helpful!

I love how you drew out the truth that God’s anger is an expression of His love, so unlike our own which is why, I think, it can be such a difficult attribute of God’s to appreciate and embrace as good.

This is so good!

“Even as His anger against sin is poured out, His grace in sending Jesus to bear it in our place assures us of His perfect love.“

Thanks for reading, Melodye!

Thanks! Yes, I think so often we see the destructive results of human anger so it can be hard to see anger as a good thing. It helps to remember that God’s anger is different.