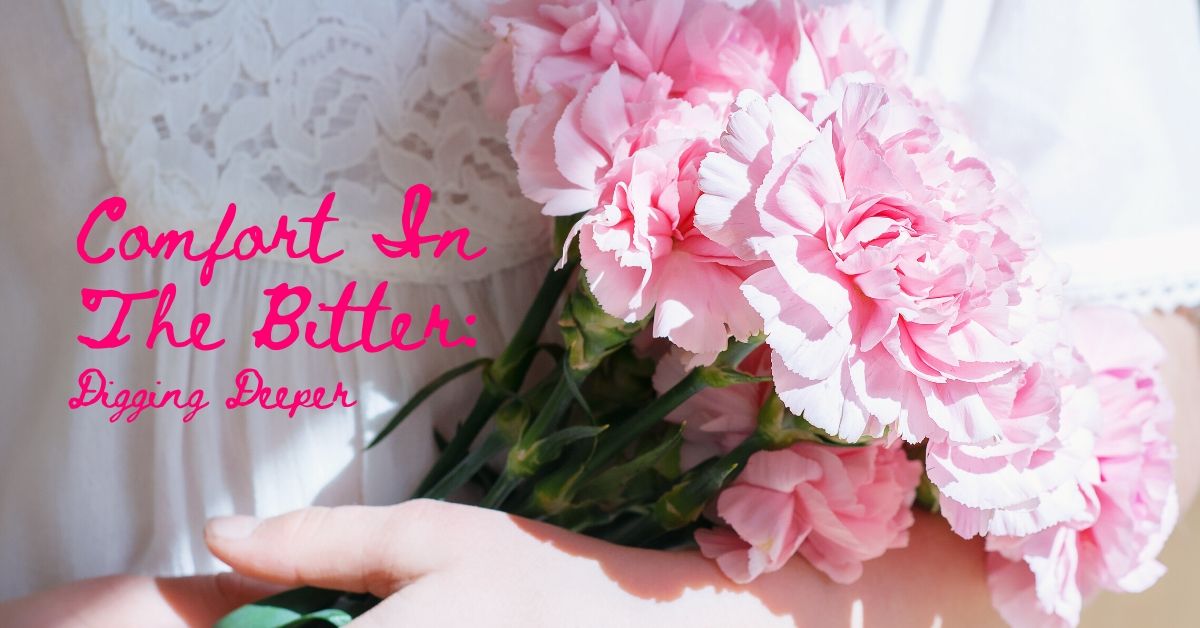 Today is 2-for-1 Friday!
Check out Comfort In The Bitter!

1) Where was Moab and why is it important they traveled there?

2) Why does Naomi attempt to send Orpah and Ruth away?

3) Why did Ruth choose to stay with Naomi?

1 During the time of the judges, there was a famine in the land. A man left Bethlehem in Judah with his wife and two sons to stay in the territory of Moab for a while. 2 The man’s name was Elimelech, and his wife’s name was Naomi. The names of his two sons were Mahlon and Chilion. They were Ephrathites from Bethlehem in Judah. They entered the fields of Moab and settled there. 3 Naomi’s husband, Elimelech, died, and she was left with her two sons. 4 Her sons took Moabite women as their wives: one was named Orpah and the second was named Ruth. After they lived in Moab about ten years, 5 both Mahlon and Chilion also died, and the woman was left without her two children and without her husband.

6 She and her daughters-in-law set out to return from the territory of Moab, because she had heard in Moab that the Lord had paid attention to his people’s need by providing them food. 7 She left the place where she had been living, accompanied by her two daughters-in-law, and traveled along the road leading back to the land of Judah.

8 Naomi said to them, “Each of you go back to your mother’s home. May the Lord show kindness to you as you have shown to the dead and to me. 9 May the Lord grant each of you rest in the house of a new husband.” She kissed them, and they wept loudly.

10 They said to her, “We insist on returning with you to your people.”
11 But Naomi replied, “Return home, my daughters. Why do you want to go with me? Am I able to have any more sons who could become your husbands? 12 Return home, my daughters. Go on, for I am too old to have another husband. Even if I thought there was still hope for me to have a husband tonight and to bear sons, 13 would you be willing to wait for them to grow up? Would you restrain yourselves from remarrying? No, my daughters, my life is much too bitter for you to share, because the Lord’s hand has turned against me.” 14 Again they wept loudly, and Orpah kissed her mother-in-law, but Ruth clung to her. 15 Naomi said, “Look, your sister-in-law has gone back to her people and to her gods. Follow your sister-in-law.”

16 But Ruth replied:
Don’t plead with me to abandon you
or to return and not follow you.
For wherever you go, I will go,
and wherever you live, I will live;
your people will be my people,
and your God will be my God.
17 Where you die, I will die,
and there I will be buried.
May the Lord punish me,
and do so severely,
if anything but death separates you and me.
18 When Naomi saw that Ruth was determined to go with her, she stopped talking to her.

1) Where was Moab and why is it important they traveled there?
Moab was a land across the Jordan River and the Dead Sea from Bethlehem. It was not part of the Promised Land in which the Israelites lived. The residents of Moab were foreigners who believed in and worshipped gods other than the one true God. However, as the book of Ruth begins, there is a famine in Israel, but not in Moab. Matthew Henry points out, “It seems there was plenty in the country of Moab when there was scarcity of bread in the land of Israel.” Through this relocation, although temporary, Elimelech exposed his family to a people not worshipping the Lord. Elimelech soon learned that “life in Moab became an exile, the Bethlehemites saw that hardship in their own land would have been as easy to endure as the disdain of the heathen and constant temptations to vile conformity” (Expositor’s Bible Commentary).

2) Why does Naomi attempt to send Orpah and Ruth away?
Not only had Naomi become a widow, but so had Orpah and Ruth. Women relied on a man’s provision, therefore widows did not hold much value in the biblical world. There was no one to care for or provide for them, and they had no means of earning a living for themselves. Naomi decides to travel back home to Bethlehem and urges Orpah and Ruth to also return to their families. Naomi cannot provide for them and has no chance of bearing another son for them to marry. It is also important to note Orpah and Ruth were Moabite women. Naomi is unselfishly urging them home so they may be cared for even though she will be left alone.

3) Why did Ruth choose to stay with Naomi?
Ruth does not heed Naomi’s advice to return to her family. Instead, she chooses to stay with Naomi. The end of verse 16 paints the beautiful picture of why. Ruth has chosen God. Scripture never clearly informs us as to how or when Ruth was exposed to God, but we know it happened. Ruth abandons the pagan gods her culture worshipped for the One True God who created the heavens and the earth. God used Elimelech’s choice to flee from famine to welcome in a daughter not born of Jewish descent. It is for this reason Ruth stays with Naomi and vows to never leave her.

1) Where was Moab and why is it important they traveled there?
How often do we travel to our own Moab to a land filled with unbelievers? We likely do not do so in order to escape famine, but instead some other perceived comfort draws us there. Suddenly, we find ourselves surrounded by influences pulling us away from Christ instead of pushing us towards Him. We too find ourselves facing temptations, and those perceived comforts end up not worth the price we are asked to pay. “Hardship would have been easier to endure.” When we find ourselves in our own Moab, the choice is ours on how long we will stay. Will we run back home to our Father or will we camp out for the sake of a comfort that will never last?

2) Why does Naomi attempt to send Orpah and Ruth away?
Naomi knows what life will hold for Orpah and Ruth if they remain with her. They will be left as widows and aliens in Bethlehem. The best they could hope for is to glean the extras in the fields, a provision God gave for the poor and resident alien in Leviticus 19:9-10. Naomi tries to send them to a better life with their own families and the potential of a new husband even though it will leave her alone. Expositors says, “to throw off the thought of personal comfort natural to one in her circumstances and look at things from an unselfish point of view was very difficult.” How many times do we find ourselves in a similar situation? A place where we must unselfishly give up our own desires in light of what is best for others.  We must choose, as Naomi did, to value others’ desires more than our own. Expositors reminds us, “In reading her story, let us remember how apt we are to colour advice half unconsciously with our own wishes and our own seeming needs.” The challenge is to ask God to allow us to unselfishly view our situation, placing others before ourselves.

3) Why did Ruth choose to stay with Naomi?
Ruth’s choice doesn’t make sense as we read it. Why wouldn’t she leave Naomi and go back to her family with the hope of a husband, and a more secure life? She chooses Naomi knowing the choice likely means poverty and loneliness apart from her relationship with Naomi. However, her reason is founded in truth. She has chosen the one true God over her culture’s pagan gods. She chose to do what was right in the eyes of the Lord. We too are often faced with difficult, unpopular decisions where one route provides more visible comfort and security than the other. In those moments, may we choose, like Ruth, to walk down the path leading not to comfort, but instead is a response to what is right (even when that is an unpopular decision). As we make those choices, may the Lord work through us just as He did Ruth. Let’s not forget her decision of choosing God is what allowed her to become the great-grandmother to King David and further down her lineage, we find it leads directly to Jesus. God used her circumstances to further His kingdom. My prayer for us is that as we follow Him, and walk the path He is calling us, His kingdom will be furthered!

What do YOU think?! Share Here!
Missing the connection to our other Journey Study today?
Catch up with Comfort In The Bitter!

This is Redeemed Week One!
Don’t miss out on the discussion!
Sign up to receive every GT Journey Study!