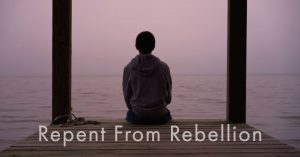 Today I set a screen time limit on my phone. It was a physical act of surrender, and my recognition of a need to put my relationship with God back in its proper place.

When the iPhone was introduced over ten years ago, I said I wouldn’t get one. Whenever my husband mentioned it, I said I didn’t need a phone for anything other than texting and calls. I remember seeing people at restaurants and social gatherings with their families, and thinking how crazy it was that they were staring at their devices the whole time instead of interacting with each other.

After having my second child, my reasoning changed. The smart phone was a camera and video recorder, allowing me to record my kids’ milestones and memories. I saw it as a way to store all those fleeting moments. And what we record, we share, right? Because if we don’t share it, it didn’t happen.

In time, the phone came out of my purse more and more. Not just to take pictures, but to check notifications, post a new picture, or respond to a message.
It wasn’t simply overtaking time with my kids, it was invading my time with God.
I knew something had to change, but I stalled.

A look at Judges 10 shows us the lure to replace God with lesser loves is not new. God’s people have been replacing him with empty substitutes since Creation, but His devotion to them has never waned.
Even though this type of sin is as old as humanity,
it’s easy to read through this passage and think
their offense is more severe than ours.

The rituals practiced by those who worshipped Baals and Ashtoreths (graven images or idols) were similar to modern day cults, often including cutting, sexual rites, and child sacrifice.

Most idols we put before God today aren’t as plain as Baals to our wandering eyes, but they can be just as devastating to our relationship with Him.
They tug us away, promising to fill a void in our lives.
But upon further examination,
each pursuit that replaces Him
leaves us roaming in circles.

Sometimes it’s social media.
Other times, it’s being recognized and receiving approval from others.
It can even be the love of someone we place on a higher pedestal than the Savior.

The sources of diversions are as endless as our personalities and passions, but the end result is the same. Because our God is a jealous one, He will not sit by and watch us chase empty distractions. Although he will never force us into a relationship with Him, He lovingly pursues us. He sends constant reminders of not only who He is, but the nature of His love.

What is His love like?
Exodus 34:14 says, “Do not worship any other God, for the Lord, whose name is Jealous, is a jealous God.” I admit, the first time I heard this description, it seemed negative. Did I really want to serve a God who was characterized as jealous? We’re used to hearing “jealous” in an unfavorable light, as it usually refers to human beings who employ toxic, manipulative behavior, trying to control others, not out of love, but out of insecurity in themselves.

However, our God is not lacking in anything.
He is holy, with radiance and glory so intense, Moses had to shield himself in a rock when the Lord passed by him. (Exodus 33:22-23)
He does not need us in any way.

Instead, He chooses us.
His desire for our devotion is not because He’s insecure, but because He knows it is by living in His love we will become our truest, most complete selves,
full of joy and peace.

While my attachment to my iPhone was minimal at first, the more I owned one, the more I felt its pull. Sitting at the stoplight. While the kids were wrestling in the other room. Waiting for the water to boil at dinnertime. At first it seemed harmless, but then I realized I felt a sense of panic when I didn’t know where my phone was.

The Israelites eventually realize their need to repent, but consequences come first. They were taken captive and oppressed by ruthless rulers.
Yet, God sees their heart desiring change and comes to their aid,
precisely because He loves so well.

After months of feeling the constant pull of an electronic device,
my heart desired change too.
I wanted less mindless scrolling and more of Jesus.
My soul thirsted for lasting beauty that can only be found in His sweet presence.

Because He is a gracious and merciful Father, God heard me.
His Spirit equipped me to follow Him and put down my device and choose Him.
His response will always be the same for those who truly seek him:
Come. Drink. Be filled.

Thanks for joining us today as we journeyed into Relentless Week Three! Don’t miss out on the discussion below – we’d love to hear your thoughts!

Great devotion! And, very real to me as a new mom! Thank you for sharing!

Thank you for joining us on the journey, Kristie!