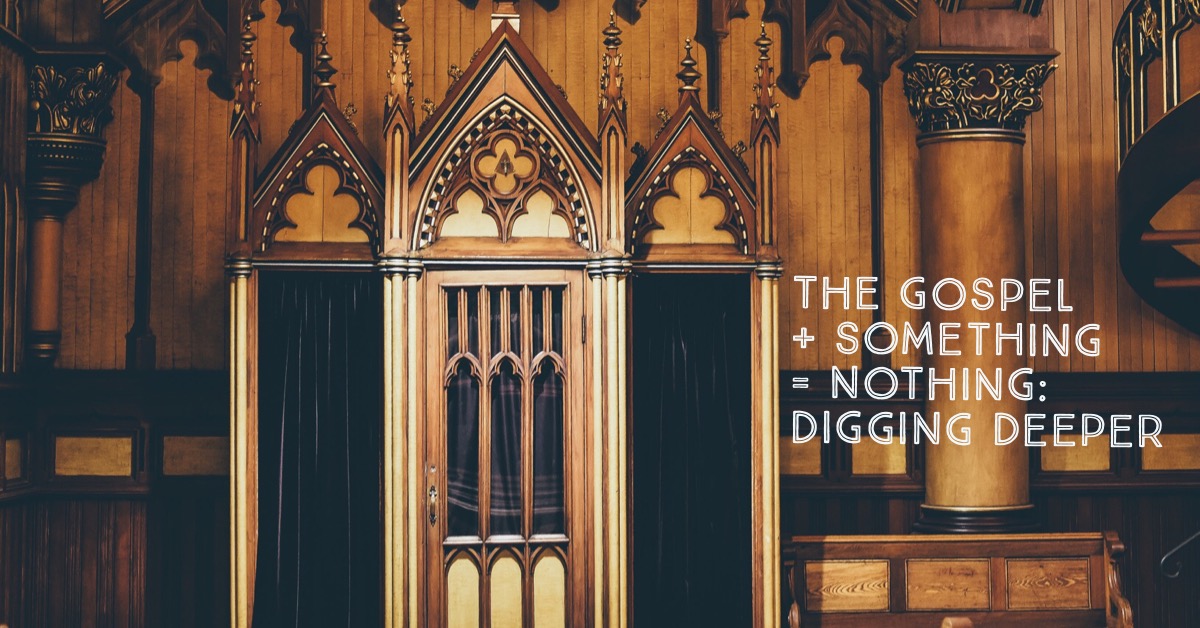 Today is 2-for-1 Friday!
Check out The Gospel + Something = Nothing!

1) Why are the Sadducees annoyed at the teaching and proclaiming of Jesus’ resurrection from the dead?

2) What does it mean that Jesus is the cornerstone and why is that important?

3) Peter and John refused to agree to “never again speak or teach about Jesus” in verses 18-22. Why? What does that mean?

While they were speaking to the people, the priests, the captain of the temple police, and the Sadducees confronted them, 2 because they were annoyed that they were teaching the people and proclaiming in Jesus the resurrection of the dead. 3 So they seized them and took them into custody until the next day since it was already evening. 4 But many of those who heard the message believed, and the number of the men came to about five thousand.

5 The next day, their rulers, elders, and scribes assembled in Jerusalem 6 with Annas the high priest, Caiaphas, John, Alexander, and all the members of the high-priestly family. 7 After they had Peter and John stand before them, they began to question them: “By what power or in what name have you done this?”

8 Then Peter was filled with the Holy Spirit and said to them, “Rulers of the people and elders: 9 If we are being examined today about a good deed done to a disabled man, by what means he was healed, 10 let it be known to all of you and to all the people of Israel, that by the name of Jesus Christ of Nazareth, whom you crucified and whom God raised from the dead—by him this man is standing here before you healthy. 11 This Jesus is

the stone rejected by you builders,
which has become the cornerstone.

12 There is salvation in no one else, for there is no other name under heaven given to people by which we must be saved.”

13 When they observed the boldness of Peter and John and realized that they were uneducated and untrained men, they were amazed and recognized that they had been with Jesus. 14 And since they saw the man who had been healed standing with them, they had nothing to say in opposition. 15 After they ordered them to leave the Sanhedrin, they conferred among themselves, 16 saying, “What should we do with these men? For an obvious sign has been done through them, clear to everyone living in Jerusalem, and we cannot deny it. 17 But so that this does not spread any further among the people, let’s threaten them against speaking to anyone in this name again.” 18 So they called for them and ordered them not to speak or teach at all in the name of Jesus.

19 Peter and John answered them, “Whether it’s right in the sight of God for us to listen to you rather than to God, you decide; 20 for we are unable to stop speaking about what we have seen and heard.”

21 After threatening them further, they released them. They found no way to punish them because the people were all giving glory to God over what had been done. 22 For this sign of healing had been performed on a man over forty years old.

1) Why are the Sadducees annoyed at the teaching and proclaiming of Jesus’ resurrection from the dead?
In the Gospels, during Jesus’ public ministry, the Pharisees, Sadducees, and teachers of the law are constantly challenging Jesus and opposing His teachings. However, as the book of Acts opens, it appears this governing group within the Jewish religion seems indifferent to what Peter and the disciples are teaching about the resurrection of Jesus. Almost as if they think since Jesus is now dead His followers no longer matter. Then we read Acts 4:2 and discover the Sadducees are actually bothered by what these men are teaching. They are annoyed because Peter and John continue the work Jesus began and are sharing Jesus with the masses and these masses are coming to faith in Jesus. Their very authority is challenged when people began believing Jesus rose from the dead and began sharing the good news. This is significant to the Sadducees particularly because they did not believe in the resurrection.

2) What does it mean that Jesus is the cornerstone and why is that important?
After being arrested and placed in jail, Peter and John are brought before the Sadducees for questioning. During this questioning, Peter is “filled with the Holy Spirit” and begins teaching and preaching the good news of Jesus to his captors. In Acts 4:11, we read a description of Jesus where Peter refers to Jesus as “the stone rejected by you builders, which has become the cornerstone”. According to Merriam-Webster, a cornerstone is “a stone forming a part of a corner or angle in a wall; specifically: such a stone laid at a formal ceremony”. The cornerstone holds a building together and without it, the building would come crashing down. Peter is informing the Sadducees of exactly who Jesus is. Jesus came to Earth and was rejected by the leaders of the Jews (and truly many of the Jews) to the point they arrested Him, tried Him, crucified Him, and buried Him. The leaders of the Jews thought the end to their challenges had come with Jesus’ death. However, Jesus rose three days later and it is this very truth that Peter is referring to. Peter is telling the Sadducees that Jesus, and what He did on the Cross by conquering death, is the cornerstone of faith. What Jesus did in conquering death, sin, and the grave is precisely the truth the church will be built upon.

3) Peter and John refused to agree to “never again speak or teach about Jesus” in verses 18-22. Why? What does that mean?
The Sadducees demand Peter and John cease preaching the truth of Jesus thinking they would agree and they could regain their corner on religion. However, Peter and John refuse this demand by asking if God would rather have obedience to the leaders of the Jews or to Himself. The obvious answer is God wants their obedience. Peter and John knew this and refused the Sadducees request. They knew God wanted their complete loyalty even in the face of persecution. Peter and John chose Jesus over all else in that moment (and lived the rest of their lives that way). They didn’t know what the Sadducees would do to them, but they did know what God was calling them to. They risked their lives for the advancement of the Gospel message because the truth was worth it!

1) Who are the Sadducees and why are they “annoyed at the teaching and proclaiming of Jesus’ resurrection from the dead”?
While the Sadducees and their opinions probably don’t directly affect us and our lives, this is still important for us to understand. Peter and John were arrested and placed in jail for sharing the good news due to the opposition of the Sadducees. Jesus forewarned us in John 15:20 that just as He was persecuted, we would be also. Although in many parts of the world there is persecution similar to what Peter and John lived, currently in the United States we don’t share those same physical sufferings. However, we will encounter our own type of “Sadducees” who are opposed to our faith and annoyed that we share the good news of Jesus. We can learn a great deal from Peter and John who chose, in the face of persecution, to share the Gospel message with those who were persecuting them. Regardless of what we face in this life, sharing Jesus with the others is always worth the cost.

2) What does it mean that Jesus is the cornerstone and why is that important?
Peter tells the Sadducees that Jesus is the cornerstone of the truth he was proclaiming to the Sadducees and all who would listen. Likewise, Jesus is still the cornerstone for us today. The truth Peter proclaimed to the Sadducees is just as important for us as it was for those who heard it immediately following Jesus’ death and resurrection. Jesus came to Earth, lived a perfect life, took all of humanity’s sin to the Cross, bearing the punishment for our sin, and rose again to forever conquer death and sin. This is the truth the Church is still built on. Without this truth, we have no hope and nothing to cling to. Jesus, and what He did, is the foundation for what Jesus’ followers believe. This cornerstone of faith in Jesus is the doorway of salvation for any who call on the name of Jesus. It is the saving truth we cling to, and find hope in, through all of life’s circumstances.

3) Peter and John refused to agree to “never again speak or teach about Jesus” in verses 18-22. Why? What does that mean?
Peter and John refuse to cooperate with the Sadducees’ request to “never speak or teach about Jesus” and in doing so, set an example for all believers for the rest of time. These men courageously stood up for what they believed, even when threatened. In the moment, they didn’t know if they would face a similar fate to Jesus for denying the Sadducees, yet they denied their demands. We can learn from their example. There will be times in the life of every Christ-follower where we must either choose to stand up for truth or give in to those who oppose Jesus’ teachings. We will need to lean into the strength and courage Jesus provides and boldly deny the demand to be silent by those who do not believe. It will look different for each of us, yet the calling is the same. As believers, we must choose Jesus. We must stand up with courage and proclaim His name and what He has done for us, regardless of what others think.

What do YOU think?! Share Here!
Missing the connection to our other Journey Study today?
Catch up with The Gospel + Something = Nothing!

This is Roads Week Two!
Don’t miss out on the discussion!
Sign up to receive every GT Journey Study!