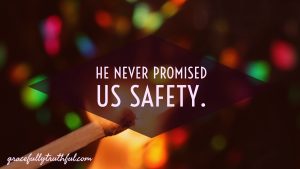 With two Littles at home, I often feel that I am basically a constant warning signal to them.  Flashing lights and siren singing, I find myself repeating mantras that could easily become the “voice in their head” as they grow and mature.  Cautioning against carelessness, accidents, bad behaviors, injury, poor choices and more.  I guess this is part of my job: to teach them to make thoughtful choices and decisions that will result in the best possible outcome and keep them (and those around them) safe.

As I reflect on the parallels I find between my parenting and the way that God parents me, I am faced with some important differences…especially when it comes to our definitions of “safety”.  He has outlined how I should walk, and His precepts are made clear to me when I spend time in His word and seek His heart.  He has given me “rules” to follow that will keep me “safe”…  Not unlike the rules I give my Tinies.  But His definition of safe does not mirror our natural definition of the word.  At this stage in life, the guidance I give to those in my charge is mostly with regard to their physical, mental and emotional well-being, while His guidance to us regarding safety has little to do with the physical and everything to do with the spiritual.

When I examine the account of Daniel’s experiences, I am hard-pressed to find examples of Daniel being “careful”.  Practically nothing he did would be considered the “safe” choice by any stretch of the imagination.

Throughout his life, Daniel chose to obey God.  Time and again, he blessed God through his obedience, even in the face of certain death.  Our nature is to focus on our immediate physical safety, but God is concerned with something far more grave:  our eternal safety.  In fact, we find Jesus’ own words to His disciples, those closest to Him, in Matthew 10:16-23.  I’ll summarize, but the cost He referenced is along the lines of…

You will be sent out amidst wolves.
Delivered to courts.
Flogged in synagogues.
Dragged before governors and kings.
Delivered to death… by those closest to you.
Hated by all.
(seriously, check out the whole passage here, it’s worth the 20 seconds!)

Those words don’t give me the slightest assurance of physical, mental or emotional safety.  Actually, they convince me of the exact opposite.  This, to those He kept closest.  His tribe.  His family.  Those he broke bread with, laughed with, prayed with.

You see, here’s the thing:
He never promised us safety as the world defines it.  Quite the opposite, actually.  What He did promise is that upon accepting Jesus as our savior and committing our lives and hearts to Him, we could rest in the security of knowing that when these bodies fade, wither, and return to dust, our spirits will be safe in Him for eternity.

My job as mama is to teach my little ones to make good choices and to learn consequences.  More importantly, it is my job to teach them about Jesus, and what true safety means.

Lord, help me to walk before You in bold obedience that others may seek You for themselves, so that they might know what real security and safety in You looks like.

Thanks for joining us today as we journeyed into Safe Week One! Don’t miss out on the discussion below – we’d love to hear your thoughts!

Looking for other journeys from this theme? Here’s a link to all past studies in Safe!

[…] Looking for yesterday’s Journey Post? Check out Be Careful! […]