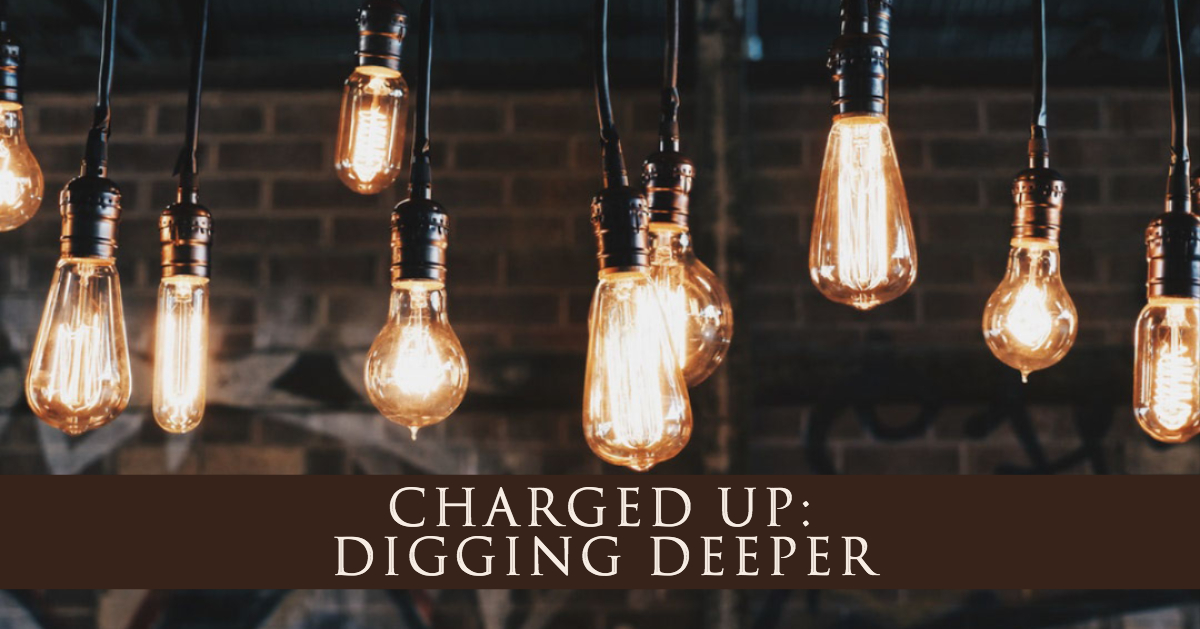 Today is 2-for-1 Friday!
Check out Charged Up!

1) What did “holding onto Peter and John” possibly demonstrate about the man’s faith?

2)  What prompted Peter’s question in verse 12 (and the message that followed)?

3) What profound understanding had Peter reached regarding the source of their healing power?

11 While he was holding on to Peter and John, all the people, utterly astonished, ran toward them in what is called Solomon’s Colonnade. 12 When Peter saw this, he addressed the people: “Fellow Israelites, why are you amazed at this? Why do you stare at us, as though we had made him walk by our own power or godliness?

1) What did “holding onto Peter and John” possibly demonstrate about the man’s faith?
It had been fifty days since the Passover event in which the prophesied Messiah had died and risen from the grave. At that first gathering, the believers witnessed the power of God through the coming of the Holy Spirit in a miraculous way. (Acts 2:2-4)  Peter, the disciple who had denied Jesus before His death, preached a powerful sermon boldly declaring that Jesus was undeniably the Christ. (Acts 2:32-33) Within a few days, the church had grown by thousands “and many wonders and signs were being performed through the apostles.” (Acts 2:43) One such wonder found in chapter 3, took place when Peter and John encountered a crippled man requesting money. Though they were unable to meet his financial needs, his physical need was certainly met. In this instance, it was apparently not the man’s faith that healed him; we see in Scripture that a request to walk wasn’t even made. It was instead the faith of the apostles, speaking the name of Jesus, that healed him. However, the man’s praise went to God immediately. He clung to Peter and John following his healing, demonstrating he now understood it was the Christ in Whom they testified who had given him healing. Years of begging came to an end because of the power of God in Christ Jesus.
2)  What prompted Peter’s question in verse 12 (and the message that followed)?
Peter doesn’t appear to be all that impressed that the crowd was amazed by a crippled man’s healing. His desire was for them to recognize that Jesus Christ, the Son of God, had been in their midst! The star-struck crowd served as the perfect opportunity for another gospel message from Peter. Just as he had spoken a few days before, Peter again proclaimed the reality of the death and resurrection of Jesus. He used this occasion to demonstrate that healing should not be the main thing capturing their attention. Ray Steadman writes about the timing of this healing: “Evidently he had been brought to the temple habitually for a long, long time, and Jesus must certainly have seen him at the temple. But He never healed him… which indicates that God had His time for great events.” On this day, God planned for the crowd that was gathered on the east side of the temple to not only be witnesses to healing, but more importantly to be hearers of the message about Jesus. The Jews had been slow to see and hear for generations. Isaiah had spoken of this moment years earlier, saying, “Do you not know? Have you not heard? The Lord is the everlasting God, the Creator of the whole earth.” (Isaiah 40) Prompted by the crowd’s continued failure to grasp the power of God in Christ, Peter asked them a question (verse 12) then spoke about what had really taken place. (Acts 3:13)

3) What profound understanding had Peter reached regarding the source of their healing power?
The certainty of the resurrection of Jesus can be felt in every proclamation throughout Acts. It was the very foundation of the sermons preached regarding Jesus Christ, the Messiah, and if anyone could have sensed the significance of the reality of the resurrected Christ, it was Peter. The apostle was profoundly impacted by what he had witnessed in those last days with his Friend, Teacher and Lord. Though Peter had confessed his belief that Jesus was in fact the Messiah for whom they had waited (Matthew 16:13-17), his fear of the Romans led him to deny he even knew Jesus. (Luke 22:54-62 ) In the few years of Jesus’ ministry, Peter was typically in close proximity to his Teacher, repeatedly inserting himself into the conversation or controversy. During the arrest of Jesus, Peter courageously drew his sword and took a swipe at the soldier. A few hours later, however, his bravery waned as he fiercely rejected the notion that he was associated with Jesus. Thankfully for Peter, death was not the end of the story. (1 Corinthians 15:3-5 ) What Peter confessed regarding Jesus’ power was from recent and personal experience. Peter’s question revealed his conviction that the power to heal could never come from himself.

1) What did “holding onto Peter and John” possibly demonstrate about the man’s faith?
So often, we find people in our churches who have been attending for years, but whose lives have barely been changed, if at all. There are many reasons for lack of growth or transformation, but just like the man who sat at the temple gate, some people come just near enough to God to see Him in the distance, yet never expect anything different to occur. It’s possible, if not probable, that the crippled man had mumbled his request to the apostles. He’d been there before. The outcome was always the same.
Until that day.
On this day, he was given much more than monetary aid. Even with such little faith, God extended mercy to him. What a gracious God we have! He is willing to provide healing and abundant living event in light of our half-hearted prayers. “Now to Him who is able to do above and beyond all that we ask or think according to the power that works in us—to him be glory in the church and in Christ Jesus to all generations, forever and ever.” (Ephesians 3:19)

2)  What prompted Peter’s question in verse 12 (and the message that followed)?
Not much has changed in the past few thousand years. If this miracle was done in a crowd today, we’d likely all have the same response. It’s human nature to be amazed at the miracle instead of following and trusting the miracle worker. Peter had learned the hard way that when you follow Jesus, the most important thing you receive is … Jesus.
It was through his own experience in learning he was now able to see the crowd’s wrong focus with a different perspective. There was no power in man’s touch or word. The amazement should be reserved for Christ Himself – the One who died for them. This is why he proceeded to preach about Christ.
Natalie Grant sings it like this: Help me want the Healer more than the healing. Help me want the Savior more than the saving. Help me want the Giver more than the giving. Oh help me want You, Jesus, more than anything.

3) What profound understanding had Peter reached regarding the source of their healing power?
We are so like Peter, aren’t we? It takes us hearing the rooster crow to finally recognize our own desperate need of a Savior. We will never be able to heal or save ourselves. It was and always will be only Jesus.
There was an old cartoon that circulated of a mouse sitting on top of an elephant’s head, both looking back at a swinging bridge they had just crossed. The mouse, observing the massive swaying of the bridge, proudly but foolishly proclaims: Look what we did!
Peter knew all too well that the man was healed by the powerful name of Jesus alone. He had seen all Jesus had done, but more than anything else he knew his life had been radically changed by the power of cross and resurrection of the Christ.
One name is higher; one name is stronger than any grave or any throne.
Christ exalted over all.
The only Savior, Jesus Messiah, to You alone our praise belongs.
Christ exalted over all! (Listen Here!)

What do YOU think?! Share Here!
Missing the connection to our other Journey Study today?
Catch up with Charged Up!

This is Seeds Week One!
Don’t miss out on the discussion!
Sign up to receive every GT Journey Study!