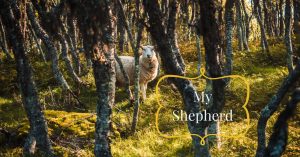 Years ago, I heard a story about a shepherd boy in Wales who had several physical limitations that kept him from learning to read. Some missionaries met him on a hillside and explained to him that Jesus wanted to be his shepherd. They taught him the words, “The Lord is my shepherd,” using the fingers and thumb of his right hand to help him remember, starting with his thumb and then a finger for each word. They told him to pause at the word “my” (his fourth finger) and use his left hand to wrap his finger and to remember that Jesus wants to be a personal Shepherd.

Some time later, one of the missionaries passed through the village and asked about the shepherd boy. He was saddened to hear about a terrible winter storm that had taken the boy’s life on a snowy hillside. The villager explained: “There was one thing, however, that we didn’t understand. When his body was discovered he was holding the fourth finger of his right hand.”

Not long ago, I read something more about this story. A minister was speaking in the town of a wealthy and successful man. The man loved to give to charitable causes, but was not a Christ-follower. He ended up at one of the services where the minister was speaking and heard the story of the shepherd boy. In the days following, he became ill and died suddenly. When the doctor arrived and found him dead, he discovered him clenching his fourth finger.

We all desire to know that someone sees and cares for us personally.
As a young child or as a successful adult, we cling to promises that assure us we are not alone. Whether or not these stories were actual events, we know that the author of Psalm 23 was a shepherd named David
(1 Samuel 16) who continually rehearsed the personal nature of his caring God.

As a shepherd himself, David was quite aware of the relationship between a shepherd and his sheep. He had probably watched through the long night for any threats to the well-being of the sheep in his care. We know he took his job seriously, even at the expense of his own life. (1 Sam 17:34-35)

The reality of David’s frightful experiences with attacks from wild animals
gives us great insight into his expression of peace stated throughout this psalm.
David had a Shepherd of his own,
and the benefits of that did not escape his notice.

David rested in the fact that he had a Provider.
As he reflected on the Lord as his own Shepherd, he got right to the heart of it.
With that kind of Shepherd, there was nothing else that David needed.

“All I have needed Thy hand has provided.
Great is Thy faithfulness, Lord, unto me.”

Singing this old hymn is a way to confess through song the truth of the first verse of Psalm 23. It reminds me that God is my very own “PCP.” He is my “personal care Provider.”
The psalmist said that “the Lord is MY Shepherd. I have what I need.”
The hymn writer said that His great faithfulness is “unto ME.”
And there’s no small print.
There’s nothing missing.
Not one other thing is needed for our soul’s well-being than what He’s already provided.

2 Peter says,
“His divine power has given us everything required for life
and godliness through the knowledge of Him who called us by His own glory and goodness.”

As my Good Shepherd, He has equipped me through His Spirit to live out the faith to which He has called me.
“Now may the God of peace, who brought up from the dead our Lord Jesus
— the great Shepherd of the sheep —
through the blood of the everlasting covenant,
equip you with everything good to do His will,
working in us what is pleasing in His sight,
through Jesus Christ, to whom be glory forever and ever.” (Hebrews 13:20)

As a Good Shepherd, our Protector keeps us safe from the harmful effects of death. Christ left the glories of Heaven to come down to the pasture of earth and rescue us, the sheep, from our enemies: Hell and Death.
Christ sacrificed His own life that I might live.
He lifted me into His arms and He is constantly holding on to me to keep me forever safe in Him.
“He himself bore our sins in His body on the tree;
so that, having died to sins, we might live for righteousness.
By His wounds you have been healed.
For you were like sheep going astray,
but you have now returned to the Shepherd and Overseer of your souls.” 1 Peter 2:24-25

I’m so thankful for my Shepherd, who knows me and holds me fast.
Because of His overwhelming desire to be our own personal Shepherd,
you can be held fast, too, Sister!

Thanks for joining us today as we journeyed into Shepherd Week One! Don’t miss out on the discussion below – we’d love to hear your thoughts!

Looking for other journeys from this theme?
Here’s a link to all past studies in Shepherd!