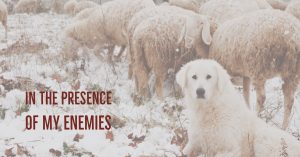 As an extrovert, nothing sounds better after a long and difficult week than a dinner party surrounded by dear friends. I look around the table at my friends laughing and swapping stories, and I forget about the “enemies” I’m facing:
stress from work, family drama, unexpected expenses, and all of the other weights of life. God has prepared a table for me and my heart overflows.  David knew all about enemies, but in a very different way than me.
He had a long list of people chasing after him, including the king and his own son! He faced many hardships in his life, but he always sought refuge in the Lord and praised Him for his success (2 Samuel 22).

David knew that God would provide his every need.
After learning of the king’s plot to kill him, David fled and sought out a priest. The priest provided holy bread for sustenance and the sword of Goliath for protection for David on his way (1 Samuel 21:1-9). In the face of his enemies, God provided just what David needed.

During Jesus’ ministry, He lived out David’s comparison of God to a Good Shepherd. He provided for people in all kinds of ways.
Like a shepherd, Jesus protected the disciples when they were in danger (Mark 4:35-41),
He made sure they found rest (Mark 6:31),
and He ultimately sacrificed His own life for all people.

One of my favorite examples of Jesus as a shepherd was when He fed 5,000 people with just five loaves of bread and two fish. Mark says,
“when He went ashore, He saw a large crowd and had compassion  on them, because they were like sheep without a shepherd. Then He began to teach them many things.” (Mark 6:34)
Jesus and His disciples were in pursuit of rest, but the crowds found them anyway. Instead of brushing them off and sending them along their way, He had compassion on them.
He saw their need.

He saw that they were looking for someone to care for them.
First, He fed their souls with his teaching.
Then he met their physical need with fishes and loaves.
Jesus prepared a table for the people that day.
Like David’s cup that overflowed, baskets were literally overflowing with extra food!

Even when life is hard, even when things are confusing,
even when it feels like nothing is going right,
God provides.
God is not just a shepherd, but a Good Shepherd.
Do you trust that He is truly good and will provide, even in the presence of difficulty?

Thanks for joining us today as we journeyed into Shepherd Week Two! Don’t miss out on the discussion below – we’d love to hear your thoughts!
Click the above image for today’s Digging Deeper!

Looking for other journeys from this theme?
Here’s a link to all past studies in Shepherd!