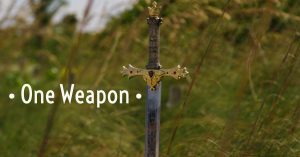 Since the beginning of time, words have been used as a weapon. In the garden, the serpent twisted God’s words to tempt Adam and Eve to eat the fruit from the tree of life. From that time until now, lies, manipulations, half-truths, and slander have been fuel for the fire of pain and division.

In Ephesians 6:12 Paul reminds us,
“Our battle is not against flesh and blood,
but against the rulers, against the authorities,
against the powers of this dark world and
against the spiritual forces of evil in the heavenly realms.”

I’ve used my own words as a weapon against others, or even as a defense to keep people from getting too close and knowing something I would rather they didn’t.
My words have cut others and myself deeply.
They have burned bridges and destroyed friendships.

I think a lot about the conversations and words of the past and the impact I made because of them. I’ve been fighting the wrong enemy using the wrong weapon.
I’ve been duped by the real enemy – Satan.

Up until this very last instruction from Paul, we are asked to take up pieces of armor that are defensive, pieces intended to protect our heart, mind, and soul.
But now, after fastening ourselves with this armor, we are invited to pick up a sword,
the only weapon we are to carry, the Word of God.

For the first two years after college, I was on a traveling music ministry team. After my two-year commitment was over, I was invited to help train the next set of teams who would go out to carry on the work that had been done by teams before us for the last 48 years. While I was on this training staff it came to our attention that many of the team members were suffering pretty intense spiritual attacks. A few of us decided it was time to fight.

In the chapel above the dining hall, there was a small costume and prop closet where I found myself a plastic toy sword, tucked it into my belt loop and joined other staff as we picked up our Bibles, and some old hymnals with scripture-based songs and decided to walk the path around the camp we were staying at and fight. I wore that sword in my belt loop for the rest of the 3 weeks of training. I didn’t realize it until writing this what a significant symbol and message to the Enemy this was.
We were armed with Scripture and we wouldn’t back down.
I would fight for those team members against his schemes,
and I knew we had the upper hand.

It may seem like an ineffective weapon.
How can a book of writings from a bunch of dead guys be our weapon?
Could this really be what Paul meant?
But when we take a closer look, we see there is more power to God’s Word than meets the eye.

How are you training for battle?
Are you relying on your own words to be your dagger?
Or are you picking up the unfailing Sword of the Spirit?

When we are armed with Scripture, we can walk out into the daily battlefield of life prepared to fight the spiritual forces of the heavenly realm with a fool-proof weapon.
Stay in the fight, Friend, His Word will never fail!

Thanks for joining us today as we journeyed into Shielded Week Three! Don’t miss out on the discussion below – we’d love to hear your thoughts!

Looking for other journeys from this theme?
Here’s a link to all past studies in Shielded!

Our Sword must be kept sharp, prepared and ready. If we leave our bible laying on the bedside table collecting dust, it won’t be helpful in the day of trial. We need to read it, meditate on it, memorize it, share it. Make it part of our lives. Then it will be the LIVING Word of God.

Absolutely! May we daily be sharpening our swords!