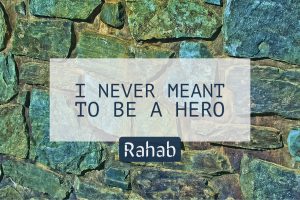 I never meant to be a hero. I never thought I could even be deemed as one. For most of my life, I was the furthest thing from a hero. I was the woman who kept travelers happy while they were away from home. I was the woman who could keep men satisfied when their wives couldn’t. To some men, I am sure I was seen as heroic, but if you asked their wives, their mothers, their children, I was a villain and a destroyer. It began accidentally, but once I began, I didn’t know how to stop. Honestly, I usually didn’t even want to. My job gave me a unique niche. I heard things, information I could use to my benefit and sometimes even to turn a bigger profit.

Political tidbits, relationship frustrations, and gory battle stories would pass from the lips of men as they tried to get comfortable with me. At first I only half listened, as most stories were rather dull. However, the more the stories were told, the more I would listen. Some stories were from long before I was born, some were recent, and some were told with intensity or frustration or bravado, depending on the man who told it. I heard them enough to know which were true and which were exaggerations meant to impress me. But then men started talking about the Israelites. The more they talked, the more I felt their fear and heard it in their voices.

“Israelites were fleeing Egypt, while being chased by the Egyptian army, and in the blink of an eye, at the very last moment, the waters of the Red Sea rose to either side so the Israelites could pass through to safety.”

Or there was a tale of those same Israelites completely annihilating two kings and their kingdoms as if they were stepping on a hill of ants.

Every man who told these stories gave credit to the same Power – The Lord. As I listened, my heart grew heavy, as if it was completely melting away from my body, for I knew the Lord must be real. He must be a true God. The true God. The more I heard, the more I understood that the men were quaking in their boots not because of this desert-wandering-nation, but because of their God’s power to conquer every other god I had known.

I didn’t seek to be used by this Yahweh.
I didn’t even like thinking about this God.
My heart would grow heavy every time I thought of Him because I knew I was living in sin.
I was no match for Him.  But one day these two strange men came knocking at my door. That action, in particular, was nothing new, but there was something different about those men. They asked to stay with me, but they were noble and chivalrous, they were kind. They didn’t want my body, but were seeking shelter instead. My house was empty that night, so I allowed them to stay. It wasn’t long until I heard shouts and pounding at my door. My guests looked at me, frightened and unsure of what I was going to do. It was then, in that instant, that I knew Yahweh was with these men and they came from the Israelites I had heard so much about. The obviousness of their espionage became suddenly clear – they were here to scout Jericho in preparation for overtaking it.

My heart pounded harder and I wasn’t sure if I was more scared to be in the presence of these men, the beating at my door, or the realization that I was helpless before these people and their God. My decision came with swift clarity, I had no chance of survival without this Yahweh. My only hope was throwing myself at His mercy.

“Come with me!” I commanded, and quickly lead the men to the roof of my house to hide before sending the soldiers at my door on a false trail of these Israelite spies.

I couldn’t just save these men and send them on their way. No. I knew they were here for a reason, and I knew this city I had called home for my entire life would soon be no more. So I bargained with them, pleaded, really, to spare my life just as I did theirs. They promised me that my life and lives of any family who gather in my house on the day they would destroy Jericho, would be saved. They promised me kindness. They promised me faithfulness. But I knew it wasn’t these men who could protect me, it would be their God.

Well, that day of destruction came. My family and I huddled together inside of my home while we listened to the cries and crumbling walls coming from our city.
But nothing happened to us, even before the spies came for us.
When those two Israelites returned to escort us out of Jericho and into safety, I knew again with astounding assurance that Yahweh was faithful and I promised my life to serve Him only.

I sit here now, holding my precious newborn son, Boaz, and I am once again reminded of the faithfulness of my Lord. I was a woman who had devoted her life to the service of men. I had built false love and destroyed families in the process. But it was in the midst of my own certain destruction as my city literally crumbled around me that the Lord saved my family and saved me. Beyond my wildest dreams, this same God has given me my own family. The Lord is so kind. He is so faithful.
I didn’t mean to be a hero. I never meant to save a life or even value a life before my own. But Yahweh saw something in me that I never saw in myself. He didn’t see a destructor. He saw a builder, a fighter, and a woman who desperately needed grace. The Lord is kind and the Lord is faithful.

As Rahab’s day of destruction came near, she desperately surrendered to the God who she had come to trust as the One True God. Because of her faith, her life was redeemed, both physically and spiritually. She was given an inheritance and a place in the lineage of Christ! In the midst of your own set of destructive circumstances and wayward heart, have you followed Rahab’s example of surrender?

Thanks for joining us today as we journeyed into Sketched Week Two!
Don’t miss out on the discussion below – we’d love to hear your thoughts!

Looking for other journeys from this theme? Here’s a link to all past studies
in Sketched!