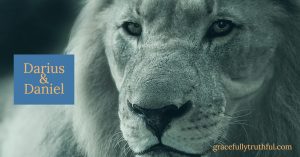 We are an underdog people, held firmly under the heavy hand of the savage, bloodthirsty Assyrians for decades. For the Assyrians, life is meaningless without the hunt for blood; they are obsessed with the need for war. They hack at flesh like it is the soft pulp of fruit, taking cruel delight in tormenting their prisoners.
But we, the Medes, have been getting stronger, biding our time, watching our enemy weaken over time. We’ve prayed endlessly to our gods, and now it seems they have answered our prayers and taken pity on our suffering.
I am Darius, King of the Medes, and as we have recently managed to overthrow the heavy hand of the Assyrians, I know full well that I must find allies, and quickly. I’m watching the Persians, and I think we can join forces, but I’ve also been watching the Chaldeans in Babylon. I’ve studied their defenses and I’m ready to make a move, ready to attack and take them as ours. Tonight! May the gods be with us!

Nebuchadnezzar had a fatal flaw. Arrogance. For a while, I watched how the Lord God gave him an opportunity to acknowledge Yahweh as the one true God, and it truly looked like he might. Especially when he came back from literally going insane and eating grass like a wild animal. Truth! But, his repentance didn’t travel all the way from his head to his heart. His legacy of arrogance grew strong and healthy in his son, Belshazzar, so much so that I watch with my heart breaking at the ruin happening around me. I am Daniel, a Jew living here in Babylon as an exile. I barely even remember being a teenager in Jerusalem before being carried off by Nebuchadnezzar; that was nearly 70 years ago now. I’ve loved Yahweh as long as I can remember. At first my loyalty to Him was out of love and respect for my own father, but the more I followed God, the more I loved Him. My existence is meaningless if I do not honor Him first. Because my heart loves Him so, I ache all the deeper as I see Belshazzar abuse the holy articles meant for service to the One True God in the temple of Jerusalem. Belshazzar has no fear of God, instead he is toasting to his endless false gods at this very moment, defying Yahweh. This will not end well. My God will defend Himself!

My soldiers and I plundered Babylon last night. It was easier than I thought. Almost like the gods had set it up for us. We ransacked them during a feast; they were completely caught off guard and Belshazzar was killed with a silver goblet in his hand. Victory feels excellent, but I want to move wisely. I’m going set up 120 satraps throughout the kingdom and place 3 high-ranking officials over them. One of them will be Daniel. When we overthrew them last night, Daniel was wearing a purple robe with a gold chain around his neck. I want him on my side in the future.

God continues to give me influence in this pagan culture, and I will continue to use it to honor Him. I don’t agree with the false worship around me, but Yahweh is a God of love and respect, and despite the way my stomach turns at their paganism, I will still extend Yahweh’s love and respect to them with my speech and my actions. I will give thanks to my God, publicly praising Him for His endless mercies and acts of love, by kneeling by my window three times every day. I know people see me. I know they hate me for it. I will still love and respect them, but I will not stop praising Yahweh. Those who watch, those who laugh, don’t realize how gracious He is to them even though they rebel so hard against Him. Perhaps one day they will see Him for Who He really is, the One True God!

Daniel is a good man. He works hard, is honorable, and has more integrity in his little finger than nearly every man in my court combined! I don’t tell people this, of course, but of all men around me, I would trust Daniel with my life. I just don’t understand it fully. Why would one man, well advanced in years (he must be close to 80!), show so much respect for a foreign head of state? I know for a fact that he doesn’t worship the plethora of gods like I do. Curious. Confidence exudes from his humility. It’s a conundrum I simply cannot fathom. Where does his stability in life come from?

They’ve finally done it. Found a way to trap me! They know I will not stoop low enough to dishonor anyone, so they’ve trapped me with my own faith by making it illegal to pray to anyone but King Darius. As outraged as I feel, I can’t help but laugh a little at the idea of praying to Darius. It’s not even a remote possibility. Honor man over Yahweh? Never! Life itself isn’t worth that much! And so it may very well cost my life. I hear the soldiers coming now, pounding up the steps to carry me away to the lion’s den and a cruel death. “Yahweh, I trust in You. And You alone.”
—-
God miraculously saved Daniel from death by lions “because he had trusted God.” (Daniel 6:23) Not even a scratch could be found on him!  As a result of Daniel’s unswerving faith in Yahweh, King Darius decreed that all people were to fear the God of Daniel and he even went on to praise Him!
I wonder who the Lord will bring close to Himself because of your unswerving faith?!

Thanks for joining us today as we journeyed into Sketched II Week Three!
Don’t miss out on the discussion below – we’d love to hear your thoughts!

Looking for other journeys from this theme? Here’s a link to all past studies
in Sketched II!