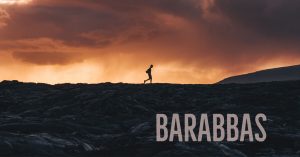 After weeks of waiting in prison, the day has finally come.
I, Barabbas, have been convicted of treason against Rome.
My punishment is the worst imaginable – crucifixion at Golgotha.

I joined the insurrectionists because I believed in their mission – to rebel against the iron fist that was Roman rule and the elite upper class of Israel. Joining the zealots gave me a sense of purpose and belonging.

My name means “son of the father”, but I have no family.
This guerilla rebel group took me in and showed me that I could make a lasting impact on the world – for good or for bad.

During the riots, I felt full of fire and passion, like I would never get caught!
I robbed and I murdered.
I became notorious among the people as a revolutionary, gained popularity among other insurrectionists, and sympathy from the common people.
My life was going great, but in the back of my mind,
I wondered when my luck would run out.

Finally, it did.
I was arrested at our most recent uprising, and I’ve been in jail with other rebels ever since. I knew I was in trouble the moment the Roman soldier grabbed me.
The Romans don’t go easy on people like me.
They don’t care if I’ve stolen or if I’ve killed someone.
My sentence is for treason, the highest offense in Roman eyes.
When I was arrested, my first thought was of crucifixion.
I knew that would be my fate.

But I have one small hope, Paschal Pardon, the Jewish Passover custom of releasing to the crowd one prisoner of their choice.
So my fate lies in the hands of an angry mob.

I’ve been told that the governor, Pontius Pilate, is going to offer to the crowd me and one other man, Jesus of Nazareth. This man is also convicted on treason,
but He’s nothing like me.
I’ve heard He’s been creating quite the commotion around the city.
I’ve heard He performs miracles.
I’ve heard He heals the sick and dines with the poor.
Some say He is a good teacher.
Others say He is the Messiah.

Jesus landed himself in this position because the chief priests and scribes are angry at Him. He claims to be the Son of God – blasphemy in their eyes.
He said that the temple would be destroyed, but He would raise it up in 3 days (John 2:19). More blasphemy.

Getting the chief priests and scribes angry may play to my advantage, though.
They have influence and they will be in the crowd today. They want Jesus out of their way and they will do whatever it takes to make it happen!
If they argue for Jesus’s crucifixion, surely the crowd will as well.
—

I’ve gotten word that the crowd seems to be favoring my release over Jesus! I may have a second chance at life! I feel so full of relief, vigor, excitement, deliverance, and…

Guilt.
This man has done nothing to deserve death!
When He came into Jerusalem at the beginning of Passover, He came riding in on a donkey and people praised Him shouting, “Hosanna!” (Matthew 21:1-11).
He has brought hope and healing, not death and destruction like me.
Who could this man be?
Is he a good teacher?
Is he a prophet?
Or is he really the Messiah?

How could this innocent man die in my place?
Me, a sinful and guilty man!
If this Jesus really does die for me, I must find out the truth.
Why He is here and why He died.
——

Barabbas was the forerunner of all people to be saved by Jesus’ death. Barabbas was guilty for his sins. He deserved death. Instead of receiving what he deserved, he was shown mercy. Jesus took his place on the cross so that Barabbas would not that have to die that day.
Today, we are all Barabbas.
We deserve death for the sins we have committed, for all have sinned and fall short of the glory of God (Romans 3:23). Jesus lived a perfect, sinless life and died the death we deserve. Imagine the relief Barabbas must have felt when he learned that he would not be crucified. May we also experience that kind of appreciation and thankfulness for our salvation through Jesus Christ!

Thanks for joining us today as we journeyed into Sketched Week One!
Don’t miss out on the discussion below – we’d love to hear your thoughts!

Looking for other journeys from this theme? Here’s a link to all past studies
in Sketched III!