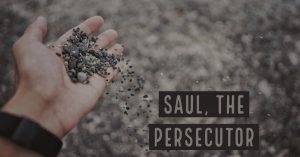 Somehow the prisoners had escaped!
Not only had they escaped, but they had literally returned to doing exactly what I had imprisoned them for in the first place: preaching in the name of Jesus.
Even now the guards were returning to the Temple to bring them back before the Council. What level of geniuses are we dealing with? Obviously, they are not in their right minds to disregard the commands of this authority.
We are the Council.
We are the teachers of the Law.
We decide if you are in good standing before God.

The more I thought about their disrespect of our authority, the angrier I became.
A few of the members of the Council laughed about a recent happening in the marketplace as we waited, and I caught the eye of the man facing me.
I’m not completely sure what my facial expression communicated, but the smile on the other man’s face dimmed and their conversation dropped several decibels. Maybe idiots aren’t only outside this group.
Scandalous disrespect for the Torah and our traditional laws is no laughing matter.

When the guards arrived with the prisoners in tow, I stared at the leader.
If I caught his eye, maybe I could convey a similar message to him as I had to my compatriot. I intensified my gaze and straightened my spine.

The high priest questioned them as to why they had disobeyed their previous orders to stop teaching in the name of Jesus and the leader had the gall to promptly reply that they were obeying God rather than man.
We are the authorities God put in place.
We are the teachers of the Law.
We are the ones who know the texts and are required to implement them.
Who is this man that implies he has heard from God and we have not?
Disgusting arrogance!

By now my temperature was rising and my hands were clenched tightly in my lap. I willed the leader to look my direction, but he continued to boldly meet the eyes of the high priest. It was a mercy he did not look my way. If looks could kill…

Suddenly Gamaliel stood and directed the guards to take the men outside. Once the doors were closed, Gamaliel addressed the group and suggested the men be released. He reasoned that in previous uprisings of this sort, incidents faded away once the leaders were gone. He instructed us to remain out of the scenario just in case they truly were speaking for the Lord.

Gamaliel is a well-respected, wise man, but my anger burned at his plan. These followers had already proven disregard for our authority, and I did not foresee that changing if we simply let them go. Thankfully, someone echoed my thoughts and agreement arose to flog the prisoners before releasing them. I barely controlled myself. Flogging? I scoffed under my breath, these traitors deserved nothing less than death.

Some time later, I found myself once again sitting among Council members as another follower stood before us. Stephen was his name. Accusations against him had been raised and we’d called him before us. The high priest asked him for the truth and suddenly I found myself listening to a history lesson. How degrading to have such a lesson from one so inferior. He covered the gambit from Abraham to Joseph to Moses to King Solomon.

My patience waning quickly, I hoped my distaste was clearly communicated each time I ignored his words and smoothed my robes, my every action mocking him with disdain. Every muscle tensed and my heart began to race as he closed his argument by saying, “You stiff-necked people with uncircumcised hearts and ears! You are always resisting the Holy Spirit. As your ancestors did, you do also. Which of the prophets did your ancestors not persecute? They even killed those who foretold the coming of the Righteous One, whose betrayers and murderers you have now become. You received the law under the direction of angels and yet have not kept it.”

The atmosphere in the room shifted.
Necks went red and white knuckles appeared.

Stephen continued as he stared to heaven, “Behold, I see the heavens opened up and the Son of Man standing at the right hand of God.”

The first man stood up and growled low. He broke the floodgates and a wave of men drove Stephen to the city gates. I hurried along with them, grateful my thoughts paralleled those around me. Death was coming quickly for this heretic!
Once we cleared the city gates, the men began shedding the robes and entrusting them to me. If this enabled them to more accurately select their stones and aim well, I would gratefully take care of their robes. I would be a unifying player in the destruction of this uprising.

As the stones flew, meeting their mark. Stephen cried out, “Lord Jesus, receive my spirit!” He fell to his knees and cried once more, “Lord, do not hold this sin against them!” The thud of stones hitting soft flesh and others colliding mid-air lasted only minutes. As the rage lessened and the evidence of the stoning’s success was apparent, the men gradually returned to me and gathered their robes. They dusted them off, pulling them back on as though this was any normal day’s work.

As the last robe was retrieved and I found myself standing alone at the city gates, Stephen’s last words reverberated in my mind. “Lord, do not hold this sin against them.”
This sin?
Against us?
He asked God for forgiveness.

I shuddered at the thought, at all the thoughts that began swirling much too close to the surface, bringing a heaviness aching in my chest.
Hatred for Stephen and all followers like him silenced the thoughts.
Determined, I turned my steps back to the Temple.
Stephen would not be the last to learn their proper place at my hands.
Forgiveness? No.

Thanks for joining us today as we journeyed into Sketched V Week One! Don’t miss out on the discussion below – we’d love to hear your thoughts!

Looking for other journeys from this theme?
Here’s a link to all past studies in Sketched V!