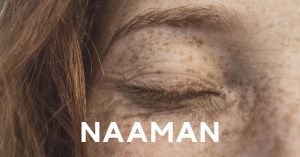 From the outside, it looked like I had it all together.
Wealthy, successful, happily-married.
I was respected, even admired, by everyone around me.

They knew of the victories the Aramean army had won under my leadership, of how I was hailed as a mighty warrior. I had worked hard, and now I was reaping the rewards. Second in command only to the king, I was proud of all I had achieved.

But I had a secret. I was getting sick. The scabs and patches appearing on my skin were tell-tale signs of leprosy. They were multiplying and spreading, and I knew there was no cure.

The thought of what lay ahead terrified me, not only the physical suffering, but people’s reactions when they found out.

Instead of being admired and applauded, I would be an outcast, branded unclean.

Instead of being viewed as successful, I would be seen as . . . broken.

I wasn’t familiar with feeling powerless.

All my life I’d been the one to whom people turned, the man with the answer, but this time I felt defeated. No amount of wealth or power could fix this problem. It seemed so unfair, and I was helpless to change it.

Then, my wife shared with me a suggestion from her Israelite servant; I should go and see a prophet in Samaria. She believed he would heal me.

My desperation outweighed the ridiculousness I felt at taking a servant girl’s advice, so I went to the King and explained the situation. He gave his blessing for my trip to Samaria and provided a letter to the King of Israel, so I set off along with many gifts, gold, silver, and luxurious clothing. If this prophet really could heal me, I was prepared to pay handsomely.

After meeting with the King of Israel, I was sent to the prophet, Elisha. Trembling, I waited at the door of his house. Within me, hope warred with the fear of disappointment.

Finally, a messenger came out, “Go wash seven times in the Jordan and your skin will be restored and you will be clean.”  (2 Kings 5:10)

This so-called prophet wasn’t even going to come out and see me?!
Didn’t he know who I was?!

I’d expected him to stand before me, wave his hands over my body, and call on his God to heal me, not tell me to bathe in a river! And compared to the cool, crystal-clear waters of Damascan rivers, the Jordan was a sludge-filled creek! Why couldn’t I just have bathed in a river back home?

I regretted getting my hopes up. This whole trip was pointless! I felt scandalized!

“Sir . . . ” One of my officers approached, tentatively, interrupting my clear rage.
“If the prophet had asked you to do something difficult, you would have done it. Why don’t you give it a try and do as he says? Go and wash in the river.”

The cool water washed over me as I submerged myself seven times. It was certainly refreshing, but it also felt like I was being cleansed, and not just on the surface, but deep inside.

When I finally dared to look at my skin, I knew instantly it had worked! There was no sign of leprosy. I was healed!

We rushed back to thank the prophet Elisha. Overflowing with gratitude, I attempted to give him the gifts I had brought.

I realised I wasn’t only grateful to Elisha; his God had healed me. The God of Israel was the true God. I was humbled by His power, which far exceeded my own, and by His love and mercy in healing me despite my pride and stubbornness.

Nothing could persuade Elisha to accept the gifts I offered, and, believe me, I tried. In the end, I had to humbly accept the healing as a gift of grace. Elisha did grant my request to load up two of my mules with earth to take home. While I had to return to Aram, I wanted to take a little bit of Israel with me. I vowed to worship and serve the true God, the living God, forever.

When I accompanied the King to the temple of his god, Rimmon, he would bow, and as he leaned on my arm and I supported him, I would have no choice but to bow too. Would God pardon me for this? Surely the worship of my heart was what really mattered. Who knows, maybe someday God would give me the opportunity to share of His true power through my story of healing!

Confirming my belief, Elisha told me to go in peace,
so I went,
full of joy and gratitude,
not only healed
but transformed.

Thanks for joining us today as we journeyed into Sketched VIII Week Two! Don’t miss out on the discussion below – we’d love to hear your thoughts!

Looking for other journeys from this theme?
Here’s a link to all past studies in Sketched VIII!

One of my favorite stories. May all our healing take our thoughts to God.

Yes, God is the one who can bring true healing!

You have such a gift for storytelling. I loved learning more about Namaan and his redemption.

Thanks for reading, Mary!

Yes I love this story of God’s transforming power and the hint there of what was to come, that God’s love knows no boundaries

Naaman’s story is one of my favourites and I love how the Old Testament points so clearly to Jesus and what he would do so many years later.

What a beautiful retelling, Lesley. God’s creativity never ceases to amaze me!

Thanks, Lois! God rarely works in the way we expect!

I love stories of transformation, and Naaman’s is a favorite. I love that he was cleansed both inside and out.

Yes, I love that he came seeking physical healing and God gave him so much more!

Lesley, I am in the midst of reading the Old Testament. I recently finished 2 Kings. I must admit, I breezed right on my the story of Naaman without giving it much thought. It seems like he couldn’t believe how easy it was to receive God’s grace and healing. How many times have I been in the same situation? Thank you for opening my eyes with this wonderful post.

Thanks, Laurie! I love that this post tied in with what you’ve been reading. And yes, we can overcomplicate things sometimes instead of just accepting God’s grace.

This was so well written, Lesley. And it makes me think how many times we disobey God or balk at doing something He’s said because it doesn’t fit what we expected. Great post!

Thanks, Wemi! Yes, God’s ways are often not our ways and this story is a good reminder to be open to that!

Broken But Blessed – Life in the Spacious Place

I really liked this interpretation. Your telling of the story from Naaman’s point of view brought this to life. Thank you!

Thank you! I’m glad it helped bring the story to life.